Video-game maker Electronic Arts (NASDAQ:EA) delivered record results for its latest fiscal quarter ended Sept. 30 with bookings (a non-GAAP measure of revenue) doubling over the same quarter a year ago. On a trailing 12-month basis, bookings were strong as well -- up 27% year over year thanks in part to recent acquisitions as well as strong performance from EA's core sports titles.

The strong results give EA some momentum going into the busy holiday shopping season. Here's a look at its prospects ahead -- and why sports games in particular are such a great business for EA and could make the stock a compelling buy now. 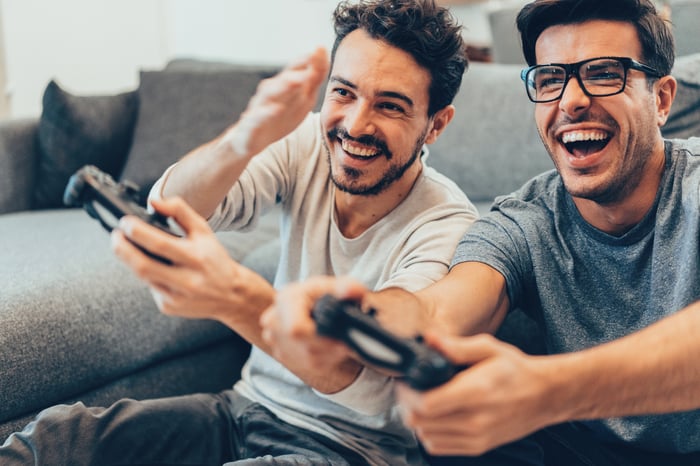 Sports is a big growth opportunity for EA

Sports can be a very attractive market for video game companies, but only a few are licensed to create content based on professional leagues. Take-Two Interactive, for example, has its best-selling NBA 2K series and recently launched PGA Tour 2K21. But EA's portfolio is much more diverse, spanning Madden NFL 22, FIFA 22, NHL 22, UFC 4, and its own PGA Tour series. Earlier this year, EA also added the popular racing franchise Formula One 2021 to its lineup through its acquisition of Codemasters.

What's so attractive about these games is that players tend to keep coming back, given the dedicated fan bases across major sports leagues. And that turns these titles into consistent money makers for EA, giving it a valuable recurring revenue stream as players buy the latest versions that include new features and roster updates for the sports teams represented in the game.

For example, Ultimate Team is a popular in-game feature, where players purchase digital cards in the game to assemble their dream rosters to compete with friends online. Ultimate Team revenue has increased each year over the past three fiscal years and made up 29% of total revenue in fiscal 2021 (which ended in March).

Another popular game is Madden NFL 22. Since launching in August, it has seen growing engagement each week during the current NFL season as interest in the gridiron encourages fans to spend time with the game. Management attributed this to new game features and Ultimate Team spending.

However, the star of the quarter was FIFA 22. Through the first half of fiscal 2022, the soccer-related game attracted approximately 100 million players. The newest version launched at the tail end of the quarter and is off to a strong start. Total players are up 16% over the year-ago period as the game taps into a massive global fan base of football/soccer fans.

FIFA is serving a massive fan base

With some 2 billion soccer fans around the world, EA's FIFA franchise has the potential to tap into a huge global market for its games. Of course, it's unrealistic to expect every soccer fan to be a gamer, but it shows the long-term growth potential with this franchise. Here's how CEO Andrew Wilson described the opportunity with FIFA in the latest earnings call with analysts:

As the sport grows, we have opportunities to expand cultural and lifestyle experiences through brand partnerships and content that our fans want more of in and around their game. And we will continue to lead with the most innovative games on more platforms, bringing the full breadth of the sport to the forefront from grassroots football to more of women's leagues, teams and players.

The addition of women's leagues could bring in more female players to the EA Sports player network. EA has previously said it is working to grow its sports audience alone to 500 million, including both players and viewers, within the next five years.

The stock looks attractive in light of these opportunities

What's clear is that the appetite for sports gaming is continuing to grow. EA has not seen a slowdown in spending on its games even as certain countries emerge from pandemic lockdowns. Management raised its full-year guidance and now expects bookings to grow 23% year over year to $7.6 billion although that is mainly due to the inclusion of Glu Mobile, Codemasters, and Playdemic to its operating results.

With the stock trading at a price-to-earnings ratio of about 20 based on fiscal 2022 earnings estimates, the market might be undervaluing EA's long-term growth opportunity.