The ad tech company continues to fire on all cylinders.

Revenue rose 39% year over year to $301.1 million, which topped expectations by $17.2 million. Excluding political-ad purchases during both periods, its revenue would have risen 47%. 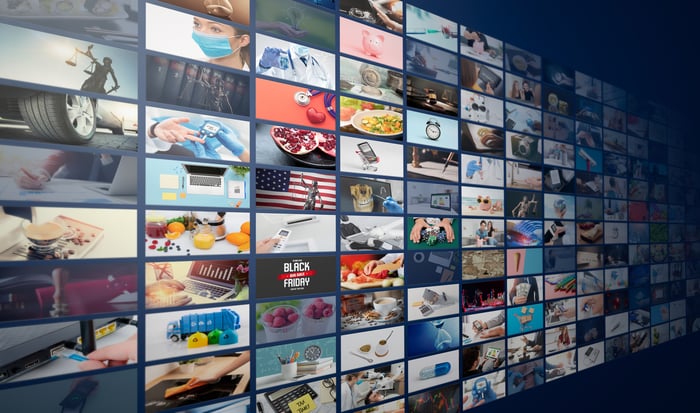 The Trade Desk's earnings beat allayed some fears about Apple's (AAPL -1.96%) iOS update and the impact of supply chain headwinds on advertisers. But is it too late to buy The Trade Desk after its latest post-earnings pop?

The Trade Desk is the world's largest independent demand-side platform for digital ads. It helps trade desks, ad agencies, and advertisers bid on ad inventories and manage those ads across a unified platform.

Growth decelerated in 2020 as companies purchased fewer ads throughout the pandemic. But revenue growth reaccelerated this year as those headwinds waned and its profits rose:

For the fourth quarter, The Trade Desk expects its revenue to rise "at least" 21% year over year, and for its adjusted EBITDA to grow about 14%.

Those estimates, which assume the company won't face any additional COVID-19 disruptions, imply its revenue will grow at least 42% for the full year as its adjusted EBITDA margin expands from 33.9% to over 40.9%. Analysts expect The Trade Desk's revenue to rise 40% this year and 29% next year.

Growth across "all channels"

CEO Jeff Green attributed its robust growth to advertisers making "more data-driven choices" and the launch of Solimar, its new platform for purchasing ads based on first-party data (information a company collects directly from its customers and owns). Its international business also continues to grow at a faster rate than its U.S. business.

Green said those tailwinds contributed to its "growth across all channels" during the quarter, and that its streaming video and connected TV (CTV) business continued to benefit from the slow death of linear TV platforms.

As for Apple's big privacy update, Green said "the most recent iOS changes have had no material impact on our business, and we expect that to remain the case." That confidence, which stems from its use of first-party data instead of third-party data, indicates it doesn't face the same iOS-related headwinds as Meta Platforms (Facebook), Snap, and other companies that rely heavily on targeted ads.

To prepare for Alphabet's (GOOG -2.48%) (GOOGL -2.26%) planned ban on all third-party cookies in Google Chrome in 2023, The Trade Desk continues to back the development of Unified ID (UID) 2.0, a new data-tracking technology that is gradually replacing third-party cookies.

During the conference call, Green said UID 2.0 is "reaching critical scale in the market," which counters the bearish notion that Google's upcoming cookie ban will decimate ad tech companies and data-tracking online advertisers.

The Trade Desk is growing rapidly, and it isn't relying heavily on acquisitions like Magnite (MGNI 0.09%) -- which sits on the opposite end of the ad supply chain as the world's largest independent sell-side platform -- to generate consistent revenue growth.

Unlike Magnite and many other ad tech companies, The Trade Desk is also consistently profitable by both generally accepted accounting principles (GAAP) and non-GAAP (adjusted) measures. It also hasn't been struggling with the supply chain headwinds that hurt Magnite in its latest quarter.

Is it too late to buy The Trade Desk?

If The Trade Desk can continue to generate 20% to 30% annual revenue growth over the next few years while staying firmly profitable, it could justify its premium valuation, and its stock could climb much higher.

If you believe The Trade Desk will continue to expand its CTV business, grow its international revenue, and keep navigating the shifting platform and supply chain challenges, then it's not too late to buy this high-growth stock.

Nonetheless, it could remain very volatile as myopic investors buy and sell ad-tech stocks in tandem instead of focusing on each company's individual strengths. Therefore, it's smarter to gradually accumulate shares of The Trade Desk over the next few quarters instead of buying a big position all at once.