In hindsight, the company's iBuying plans may have been doomed from the start, for one key reason.

The iBuying business is a challenging one, if it's ever going to work at all. Home values aren't uniform on a given block, much less across the country, and it's going to be difficult for any company to build the algorithm and attract the capital to make the business profitable. But Zillow (Z 6.27%) (ZG 6.67%) had the customer base, the capital, and its Zestimate price model in place, which theoretically gave it a lead in the iBuying market.

That clearly didn't work out well for Zillow or investors after the company abandoned that business last week. Where did Zillow go wrong? There are a lot of answers to that question, but one sticks out to me -- and it's that Zillow never focused on profits for its iBuying business in the first place. And given the risk involved in real estate investing in general, that could have been its fatal problem. 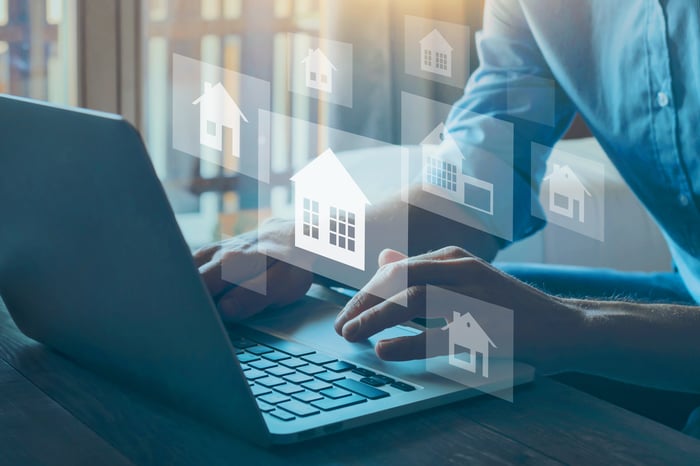 Market making was the wrong way to look at housing

Two lines stuck out to me from CEO Rich Barton's discussion with investors last week. The first was the idea Zillow would be a market maker. He said, "When we decided to take a big swing on Zillow Offers 3.5 years ago, our aim was to become a market maker, not a market risk taker."

This quote lays out how Zillow looked at its role in the industry. A market maker in the world of investing is there to buy or sell a stock at any given time at a "market" price. They make a small amount of money on the spread between the bid price people can sell stocks for and the ask price investors can buy a stock for. But the general idea is that market makers are there as a service to the market overall, not as an entity that's there to siphon off as much money as possible.

In housing, making a market is much more complicated than it is for stocks, where the feedback loop of information happens in seconds. In housing, it may be months before you know whether your model is working or not. And this is where Zillow's profit goals weren't aligned with the reality of the housing market.

Barton said, "We set unit economic targets that required us to stay within plus or minus 200 basis points of breakeven, holding ourselves accountable to these levels publicly with you all." At those levels, Zillow's goal in the iBuying business wasn't to be profitable, it was to break even.

Zillow likely thought it could make money in other parts of the value chain like selling mortgages or moving services. iBuying would serve as the gateway to these other services, but it would never be the profit engine.

The problem is that "plus or minus 200 basis point" target has become unsustainable as Zillow expects to see a downward swing of approximately 1,200 basis points for its unit economics between the second and fourth quarter of this year. With its iBuying margin hitting negative 500 to 700 basis points in the current period, the risk has become too high for management to handle. And as Zillow Offers comes up on the wrong side of profitability -- with little cushion given its long-term target -- it's poised to drag down the rest of the company.

Can other iBuyers make money in this market?

Ultimately, Zillow's pricing algorithm was unable to manage the volatility presented by a pandemic, labor shortages, and supply chain disruptions. But if Zillow had set out to generate a profit of zero to 400 basis points on every home, for example, it may still be in the iBuying business. The error it made in pricing homes recently may have left it with a loss, but the loss would have been smaller, and in profitable periods, the profits could more than outweigh down quarters.

Opendoor Technologies (OPEN 26.25%)(OPEN 26.25%) and Offerpad Solutions (OPAD 1.83%) are two companies 100% focused on iBuying, and they've reported more consistent profitability. Opendoor's third-quarter contribution margin was down 230 basis points year over year, but it was still a positive 7.5%. And Offerpad delivered a 7.9% margin in the same period.

Long-term, given the incredibly high risk involved in buying and selling homes in large numbers, iBuying should itself be a profitable, sustainable enterprise. Companies in this line of business are providing a service many home sellers value, and some are consistently showing there is money to be made offering that service.

Selling a home is a time-consuming and painful process. There's an opportunity in speeding up and simplifying that process, but Zillow failed in its efforts by treating its iBuying efforts as a means to an end. The remaining competitors can take that lesson and avoid making the same mistakes.