EVgo (NASDAQ:EVGO) stock is set to end the week up 94% from last week's close, according to data from S&P Global Market Intelligence. Its gains came mostly in response to the passage of President Biden's major infrastructure bill, which provides funds to support (among many other things) the expansion of the nation's electric vehicle infrastructure.

Many stocks jumped following congressional approval of the bipartisan legislation in question, which budgets $1 trillion for an array of projects. But the $7.5 billion earmarked to build a countrywide network of EV chargers in the U.S. will directly benefit electric vehicle charging station maker EVgo. Moreover, given the other ways the infrastructure deal supports the expanded use of electric vehicles, the value of the potential indirect demand it will help generate for EV charging stations goes well beyond the federal government's planned spending on them. 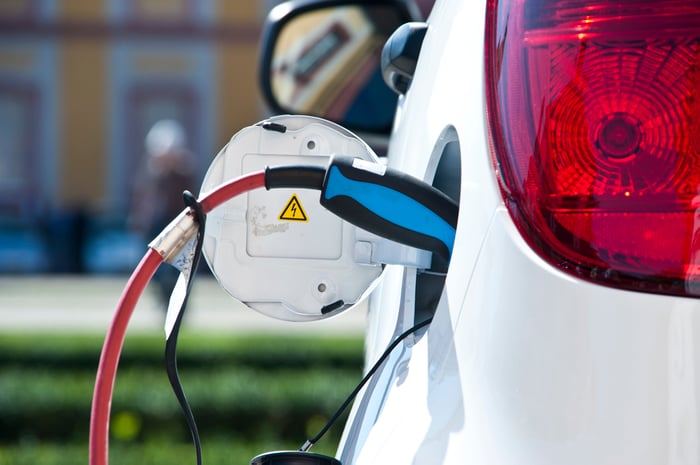 A couple of these opportunities have already surfaced. For instance, on Tuesday EVgo and General Motors unveiled plans to accelerate the establishment of the EV charging network that they are jointly developing. Their new targets call for 2,750 charging stalls to be built by 2025. Also on Tuesday, EVgo and Uber announced they, too, would be expanding their EV charging station partnership, which offers the ride-sharing giant's drivers affordable access to fast chargers.

Of course, all of these developments were highlighted on Wednesday morning during the company's third-quarter conference call, which also featured impressive financial results. Revenue improved 29% year over year, and while EVgo is still in the red, gross profits are improving. Analysts are looking for more profit progress into 2022 as well.

In most regards, this is the proverbial moment many investors have been waiting for. Electric vehicles have been working their way from the fringe into the mainstream for some time now, but with real government support in place to support their broader adoption, the EV segment is now standing shoulder to shoulder with much longer-established parts of the transportation industry.

It would be short-sighted, however, to ignore that this week's huge rally for EVgo was rooted more in investors' emotion than in cold calculations of the company's visible financial prospects. That leaves the stock vulnerable to profit-taking in the near future.

EVgo is certainly a company worth adding to your watch list. It's not a stock worth buying at its current price, though, given the likelihood of a rapid and sizable pullback.