When a company issues guidance, it can be helpful for investors to look ahead to how the business might perform in the future. It avoids just looking back at the most recent quarter, which may be an anomaly or not offer a good representation of where the company is today, and where it will be moving forward.

But the danger in an industry like cannabis is that it's still in its relatively early growth stages (even in Canada where it has been more than three years since the government legalized adult-use pot), and it can be difficult to make projections. In many cases, Canadian cannabis companies have made overly aggressive forecasts that have hurt investors in the end. 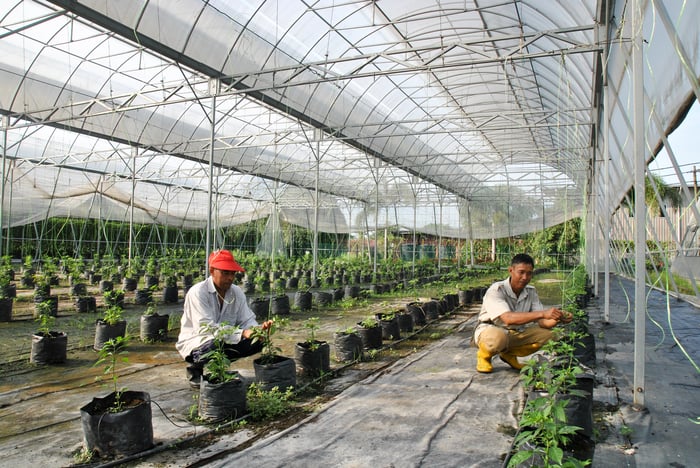 Profitability is something Canadian cannabis producers struggle with. Even positive adjusted earnings before interest, taxes, depreciation, and amortization (EBITDA) remains a long-term goal for some companies. Cannabis producer Canopy Growth (NASDAQ:CGC) is one of them.

The company let down investors when it reported its second-quarter earnings this month and announced that it would be pushing back its goals for adjusted EBITDA profitability. It says it is doing so because of "market share challenges in the Canadian recreational business and a slower-than-expected ramp-up of U.S. distribution for BioSteel."

It was just three months earlier in August when Canopy Growth said it was still "committed" to reaching its goal and posting adjusted EBITDA profit by the end of the current fiscal year. And now, the company has pushed that target out indefinitely after reporting an adjusted EBITDA loss of 163 million Canadian dollars. The stock went on to fall more than 11% on the day of the earnings release.

However, this type of disappointment is nothing new for investors, as in 2019 the company predicted its annual revenue would top CA$1 billion for fiscal 2020. Not only did it fall well short of that mark, but Canopy Growth remains nowhere near that target today; currently it is at an annual run rate of just over half that figure at roughly CA$525 million.

Could a big disappointment be looming for Tilray?

Another company that could be setting up investors for an even bigger disappointment is Tilray (NASDAQ:TLRY), which became the top cannabis producer in Canada after acquiring Aphria earlier this year. But the company isn't content on just being the top company in terms of revenue; it wants to significantly expand its top line to $4 billion by 2024.

It's an ultra-aggressive forecast, one that would make me nervous if I were an investor in the company. A major concern I have is that it would involve the company more than quadrupling its annual revenue and relying on sales from a U.S. marijuana market that remains off-limits to Canadian producers due to the federal ban on pot.

The danger for investors here is that Tilray has made this goal well-known, and there will be lots of pressure for the company to meet it. While Tilray has some excuses built into the forecast, such as legalization potentially not progressing in the U.S. as expected or challenges in the international market, the problem is those expectations are now priced into the stock's value. Without certainty as to whether the U.S. market will even be available to Tilray by 2024, this an excellent example of a forecast that the company was probably better off not making. I wouldn't be surprised if within a year it scales back those expectations.

Its rival Canopy Growth has also been overly bullish on the U.S. pot market. In January 2021, the company's CEO David Klein said that "We're pretty confident we'll be operating in the U.S. a year from now" as excitement was rampant in the sector after Democrats obtained control of the House and Senate, with many in the cannabis industry believing legalization was imminent. But now, less than two months away from the new year, legalization still does not look to be anywhere on the horizon.

Creating lofty projections can be a surefire way to destroy a stock's value. That's why, for the volatile cannabis sector in Canada, companies are better off just not making any aggressive forecasts right now. And if investors see that happening, they are better off taking their money elsewhere, into safer growth stocks.