Electric vehicle sales are booming, and demand for the lithium that powers their batteries is likely to rise.

Electric vehicle (EV) sales are expected to reach 7% of all new vehicles sold worldwide in 2021, exceeding five million units sold. Research and Markets estimates that by 2030 that number will ratchet up to 48%.

The EV market, one of the fastest growing markets today, is projected to continue its fast track at a compound annual growth rate (CAGR) of 22.6% for at least the next 6 years. At that rate, it would increase the total global EV market value from what was $162 billion in 2019 to over $800 billion by 2027.

Some investors looking to partake in the EV market will buy stocks in auto manufacturers such as Tesla. But what powers the vehicles produced by those auto manufacturers can also power an investment portfolio. Two companies that present a great opportunity for investors include lithium producers, Albemarle (ALB 2.17%) and Livent Corp. (LTHM 2.41%). 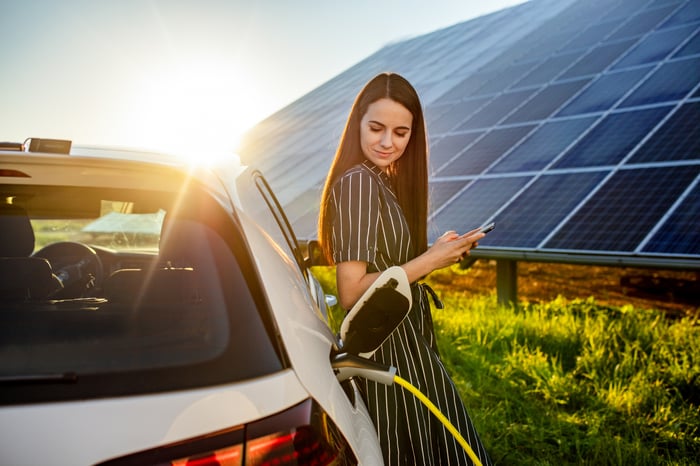 The EV battery market is expected to grow at a CAGR of 25% over the next four years to $67 billion, leading to strong demand for lithium, the primary energy source for the batteries. Albemarle is the world's second largest lithium producer by capacity, producing over 85,000 tons per year.

Boasting a market cap of $31 billion, the company has mining operations in the U.S. (Nevada), Chile, and Australia's Greenbushes mine where it holds a 49% stake in the world's largest hard rock lithium deposit. Among its biggest customers is Panasonic, one of the top three EV battery manufacturers in the world,  which are collectively responsible for 70% of the EV battery market.

Albemarle's lithium business has been increasing as a result of the demand from the EV market. In its third-quarter earnings results, it reported that total revenue was up 11%, driven partly by the lithium business, which experienced a 35% increase in revenue for the quarter on a year-over-year basis. Growing volume, higher pricing, and higher demand all were factors in the revenue increase.

Looking forward, Albemarle expects to see continued demand for lithium, resulting in higher sales. That has led to an upward revision for full-year 2021 earnings per share (EPS) in the range of $3.85 to $4.15 from a previous projection of $3.35 to $3.70, a 17% increase based on the midpoint of ranges. CEO J. Kent Masters believes the company is well positioned to take advantage of growing demand for EV production by bolstering its lithium production to support the battery market.

Supporting this positive future outlook is the approval of expanded production of lithium at its Chile mining facilities. In 2018 the company was approved to produce 145,000 metric tons of lithium carbonate per year -- for 22 more years -- until 2043. In October it also announced two new agreements in China, where it will begin production of two new plants in 2022, each with planned production capacity of 50,000 tons of battery-grade lithium carbonate. The two new facilities are expected to see construction complete by the end of 2024.

Livent should benefit from a growing market for nickel-rich batteries

Livent operates manufacturing sites in the U.S., Argentina, China, England, and India. As a pure-play lithium producer, it operates a low-cost lithium mineral deposit in Argentina, with its strategy focused on lithium hydroxide -- a key ingredient for nickel-rich batteries. The company estimates that nickel-rich batteries will increase in market share among battery types from 25% to 75% by 2030. That's not to say that Livent's market share will triple, but the potential for increase is there.

In Q3, the company saw revenue increase by 7% on a year-over-year basis. Higher revenue combined with improved market conditions backed by higher pricing and stronger demand resulted in the company providing an upwardly revised full-year guidance for revenue. A previously stated $380 million -- at midpoint of range --  was increased to a new midpoint of $400 million, representing a 5% increase.

In addition to sufficient inventory, the company is also expecting to bring expansion online a year from now, with additional hydroxide production slated for Q3 2022 followed by additional lithium carbonate production in Q1 2023. A phase 2 carbonate expansion is expected to be in production by the end of 2023.

Shortages in lithium will lead to an emphasis on production

The rapid explosion of the EV market in just its early stages is leading to a shortage in lithium, and the need for producers to invest on growing. The shortage is resulting in higher prices, which could last into the mid-2020s. That shortage will lead to higher battery prices, which could impact the price of electric vehicles. However, experts believe that lithium ion batteries will remain the dominant technology platform over the next 10 years.

Lithium producers, like Albemarle and Livent, that are able to boost capacity to keep up with the production needs could generate increased revenue and stronger earnings. For investors looking for some green in the EV market, mining profits from these lithium operators might be a great place to start.

With Tesla and the EV Market In Disarray, Is Top Lithium Stock Albemarle A Buy For 2023?

Why I Own Albemarle Stock