Shares of edge computing internet and security company Cloudflare (NYSE:NET) are on an absolute roll this year. As of this writing, the stock is up 220% over the last 12-month period alone -- valuing the young company at a whopping 100 times expected full-year 2021 revenue to enterprise value.

Given such a valuation, suffice to say any investor that makes a purchase right now should be expecting incredibly great things from Cloudflare for many years to come. The third-quarter 2021 update underpins the massive potential the firm still has -- although I'd advise against trying to chase returns at this point. 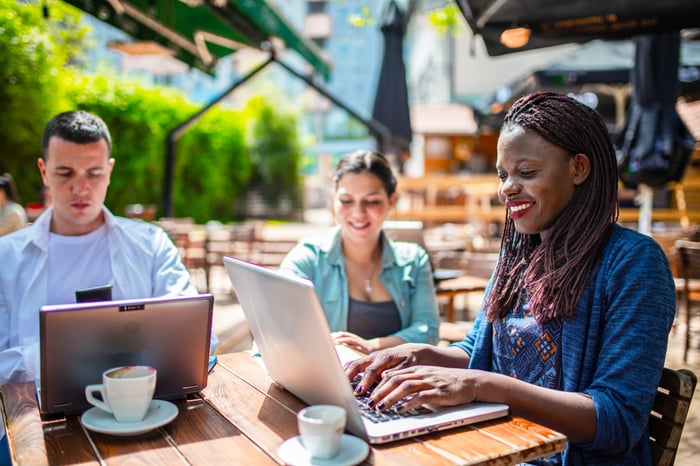 Another quarter of 50%+ sales growth

First, the headline numbers. Cloudflare posted revenue of $172 million in the third quarter, up 51% year over year and the fifth straight quarter of at least 50% sales growth. In fact, since Cloudflare started reporting as a public company in the autumn of 2019, it's only dipped below the 50% year-over-year sales growth mark a handful of times -- but never reported a quarterly sales rate lower than 48%. No wonder this stock has steadily built momentum since its initial public offering a couple of years ago.

Talk about compounding returns. If Cloudflare can keep it up, it will earn that sky-high valuation (currently an enterprise value of $66 billion) sooner or later. As for the fourth quarter of 2021, CEO Matthew Prince and the company anticipate revenue to be $184 million to $185 million, up "only" 47% from last year. Cloudflare has developed a reputation for underpromising and overdelivering at this point, though, so maybe the company is just being modest.

Driving this incredible growth, in spite of lapping a pandemic lockdown boom in internet traffic in 2020, has been Cloudflare's ability to pick up larger customers at a fast pace. A record 170 enterprises that spend at least $100,000 per year with Cloudflare were added to the edge computing company's roster of users, bringing the total large user count up to 1,260 at the end of Q3.

A constantly expanding list of web management features and security products is helping the company attract these lucrative customers. And tech researcher Forrester Research recently put Cloudflare in the top spot among edge network providers. Forrester Research ranks it ahead of Fastly (which in the past has claimed technological superiority over Cloudflare), legacy content delivery network Akamai Technologies, and even cloud hosting juggernaut Amazon Web Services.

Eventually, Cloudflare will decide to start generating a profit

Cloudflare is differentiating itself from the pack -- both in terms of its network capabilities and as a stock. But what about profit margins -- or lack thereof? Free cash flow sank to negative $39.7 million in Q3, down from negative $9.8 million posted in Q2 just a few months prior. Clearly, between a lofty stock premium and persistent losses, investing in Cloudflare isn't for everyone. Shares have been going up in a nearly straight line for months now, but that won't last forever.

On the contrary, investors' animal instincts will eventually kick in and some stock volatility will return. Perhaps a realization that this is only an investment for those with an ultra-long outlook will settle in again. To wit, Prince reiterated what he explained during the second-quarter earnings call this last quarterly update: "We have a long-term operating margin target of 20%. We remain confident in our ability to reach that long-term target, but we are not in a rush to get there."

Basically, as long as Cloudflare can drive hypergrowth of its business by launching new features and products, it will continue to funnel as much cash as makes sense into these initiatives. And to reinforce this thought, Prince added that his company is "nowhere close to being out of ideas." Long story short, expect this internet business to hover near or below breakeven for at least another few years.

On one hand, this makes sense. Keeping excess cash on balance at the bank ($1.8 billion in cash and equivalents, offset by convertible debt of $1.1 billion at the end of September) with interest rates paying very little is a poor use of money. And if Cloudflare can keep expanding at a rapid pace, investors can get a far larger payoff down the road when the company starts running out of new ideas. This is still to a large extent how Amazon successfully operates its e-commerce and cloud computing empire, even though it already hauls in tens of billions of dollars every quarter.

Granted, it's far too soon to declare Cloudflare "the next Amazon," or even the next tech giant. But given its stellar performance even during the pandemic where some of its peers have faltered, I certainly wouldn't bet against Cloudflare.