Rivian Automotive (NASDAQ:RIVN) has hit the market with a bang, trading more than 30% over its IPO price and now sporting a market cap near $100 billion. This is despite only producing about 15 vehicles per week right now. The company has a bright future, but investors looking for any value in electric vehicle stocks should probably look elsewhere right now. 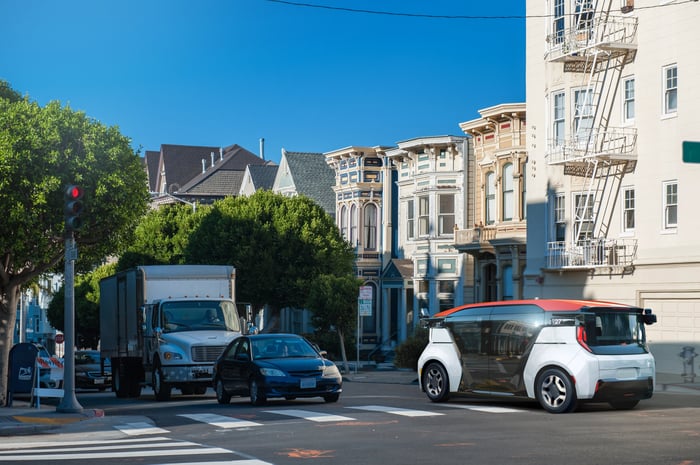 The leader in autonomous driving

Travis Hoium (General Motors): As companies like Rivian get all the headlines in electric vehicles, General Motors is quietly building out the technology and manufacturing capacity to transition entirely to electric vehicles by 2035. That includes 30 EV models that will launch globally by 2025, including cars, trucks, and SUVs.

But it isn't GM's EV capacity that makes it a better buy than Rivian, it's the company's majority ownership of Cruise, the autonomous ride-sharing company, that provides the most upside. GM is providing Cruise with design and manufacturing capabilities to build autonomous vehicles like the Cruise Origin (shown above), a self-driving shuttle for ride-sharing developed in a partnership between Cruise, GM, and Honda. Cruise is developing autonomous driving hardware and software that go into Origin and eventually a ride-sharing business. GM is also providing funding to build out Cruise's vehicle infrastructure, which could cost many billions of dollars, starting with a $5 billion line of credit to buy Cruise Origins.

In time, autonomous vehicles could reduce the cost of traveling in cities and even make vehicle ownership obsolete. Cruise is leading the way into this market, and that provides tremendous upside for GM. This may be an old company in the auto industry, but it's making great strategic moves to be a leader in the future of electric and autonomous vehicles.

Howard Smith (ChargePoint Holdings): Rivian's public debut generated a lot of excitement for good reason. The company has big backers and reportedly a backlog of orders for both fleets and consumer electric vehicles (EVs). But investors have seen plenty of examples where initial excitement causes a spike in valuation that doesn't always last.

Another exciting recent event for EV investors was the passage of a federal infrastructure bill that will push $7.5 billion to help build out the charging infrastructure needed for this country to expand EV ownership. ChargePoint Holdings is the leader in that space with more than 118,000 charging ports, including more than 3,700 DC fast chargers. The vast majority of those stations are in the U.S., though the company is also growing its business in Europe where it already has 5,400 charging locations.

Those federal infrastructure funds will be sent to states that will issue grants to the charging network companies, which will make up the country's network. And that should be a big shot in the arm for ChargePoint as the largest operator in the country. Even prior to the realization of that catalyst, ChargePoint was growing its business beyond what it had predicted before its public debut.

The company recorded $146 million in revenue for its full fiscal year 2021 that ended Jan. 31, 2021. In its most recently reported quarter ended July 31, 2021, it raised its revenue guidance for its current fiscal year by 15% to a range of $225 million to $235 million. At the midpoint, that would represent annual revenue growth of 57.5%, even without the added catalyst of federal funds.

ChargePoint generated its own excitement when it announced it would begin trading publicly last year. The stock is almost 50% off the peak price reached at the end of Dec. 2020 prior to the closing of its merger with the special purpose acquisition company (SPAC) that brought it public. It wouldn't be surprising to see Rivian's stock fluctuate as well. But for Rivian -- and all the other EV makers -- to be successful, there will need to be charging infrastructure in place. That makes ChargePoint a "picks and shovels" type of investment for the rapidly growing EV sector. That could make it a better investment today than adding to Rivian's early hype.

Rivian and Lucid are pricey, and it's hard to say which is the better value now. Rivian has received backing from Amazon and Ford as it targets the higher-end electric lifestyle truck and electric delivery van markets. Similar to Tesla (NASDAQ:TSLA), the company is bypassing the dealership framework of traditional automakers by marketing directly to consumers. Rivian also plans to build its own charging network to make electricity more accessible in remote places where a core part of its outdoor-focused target demographic requires the ability to charge. By comparison, Lucid doesn't feel the need to invest in its own charging network, choosing instead to save money by partnering with the growing list of third-party charging providers.

Rivian has already faced delivery delays due to the global chip shortage. By comparison, Lucid has quickly built a reputation for delivering on its promises, having hit all of its major 2021 goals on time. Lucid also has an excellent management team and plenty of cash to fund its 2022 operations.

Arguably the best reason why there's never been a better time to buy Lucid stock is that the company has achieved incredible engineering feats that rival Tesla -- the undisputed champ in the EV industry. Packing in more battery cells can help improve performance, but Lucid isn't doing that. Instead, it has built a compact battery pack that sports a battery efficiency of 4.5 miles per kilowatt-hour (mi/kWh) of stored energy, which is higher than the Tesla Model S, Jaguar I-Pace, Porsche Taycan, and other competitors. Lucid management believes that battery efficiency is the key differentiating factor, not just higher horsepower and range. With the Lucid Air Dream Edition and Grand Touring, it has outdone the competition in both efficiency ratings and performance -- albeit for a high price tag.

Rivian supporters would argue that not only does Rivian have a nice head start in the lifestyle EV pickup truck market, but it's also going to be a relatively insulated market because seasoned automakers like Ford and GM are only challenging the standard pickup truck market (for now). By comparison, Lucid plans to roll out lower prices trims of its sedan that would have to compete against expensive but much more "affordable" luxury sedan leaders. In doing so, it plans to lower the horsepower and range of its cars, which would bridge the gap between its advantages and the competition. However, what gives Lucid the edge over Rivian is that it has proven it can go toe-to-toe with the best in the business, hit its targets, and has plans to grow quickly in 2022 and beyond.

Given that the growth trajectory is mapped out, Lucid has a clear path toward even greater success. However, investors should be aware that Lucid stock is likely to remain extremely volatile as the company works toward scaling production.

EVs are here to stay

What we all agree on is that electric vehicles are here to stay. They're now competitive with fossil fuel vehicles in range, costs are coming down, and the innovative companies making EVs are enabling autonomy as well. The entire EV space has huge potential; we just think GM, ChargePoint, and Lucid are better buys than Rivian at today's price.