There is a vast universe of stocks to choose from, and it can be a daunting task to find some that are great to own for the long term. I have a few simple rules that I follow to filter out the wheat from the chaff. Businesses on my buy list should have a strong, enduring franchise and a great track record of growth.

Stocks that pay consistently increasing dividends will also qualify for my list. Furthermore, all candidates need to have plans and strategies to increase their revenues and net incomes over time. Such businesses can help you to compound your money over many years and significantly boost the value of your investment portfolio in preparation for your retirement. Also, a rising dividend acts as a great source of passive income that can either supplement your earned income or replace it when you decide to call it a day.

Here are three stocks that possess the above characteristics -- you may wish to include them in your buy list.

PepsiCo (NASDAQ:PEP) is one of the premier food and beverage brands that's sold in more than 200 countries around the world. Aside from its signature Pepsi-Cola, the company also has a list of top brands such as Frito-Lay, Ruffles, and Mountain Dew. PepsiCo holds a No. 1 share in the snacks market and is No. 2 in beverages, making it one of the most well-recognized companies in the industry.

The business has enjoyed steady top-line growth of 4% annually in the last eight years and expects to achieve 4% to 6% revenue growth over the long term. PepsiCo is also a solid dividend payer, recently raising its annualized dividend to $4.30 from $4.09 in the year-ago period. This year also marks its 49th consecutive dividend increase, putting it within striking distance of becoming a Dividend King.

Growth has continued despite the effects of the pandemic, with the company chalking up 13.2% year-over-year (YOY) growth in revenue and a 19.4% YOY jump in net income for the first nine months of 2021. PepsiCo believes there is still significant room for growth as it only occupies a 9% share in the $570 billion beverages industry and a 7% share in the $550 billion snack sector. Both industries are growing at around 4% to 5% annually, thus providing the company with room to not just expand its market share but also capture top-line growth through the acquisition of smaller players. 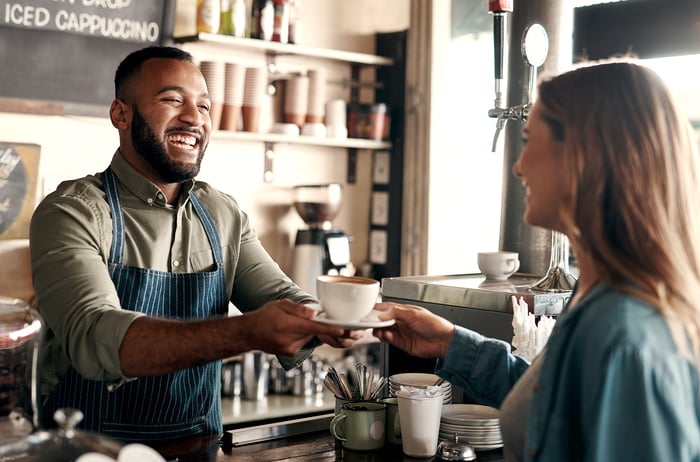 With 33,800 stores globally, coffee retailer Starbucks (NASDAQ:SBUX) is one of the largest food and beverage chains in the world. The company has shown its resilience during the pandemic by posting record revenues of $8.1 billion for its fiscal 2021 fourth quarter, up 31% YOY. Comparable store sales were equally impressive at 17% globally and 22% in the U.S. during the quarter. Net revenue for the full fiscal year rebounded to $29.1 billion, the highest in six years. Operating income ended at $4.8 billion, more than tripling the $1.5 billion seen last year due to forced closure of in-store experiences.

Its loyalty program, Starbucks Rewards, saw membership surging by 28% YOY to 25 million in the US and the company also increased its quarterly cash dividend from $0.45 to $0.49. That's its 11th consecutive increase. Starbucks believes it still has a long runway for growth as it rolls out its "Growth at Scale" agenda, with a target to have approximately 55,000 stores by fiscal year 2030.

The company also has other initiatives up its sleeve. A partnership with digital-wallet provider Bakkt now allows customers to pay for their purchases with Bitcoin, giving them yet another payment option. Starbucks is also held up as a model employer, announcing wage increases recently for its hourly employees and baristas and strengthening the company's training and recruitment process. Investors can rest assured that the coffee giant will be able to chalk up many more years of robust growth with this slew of initiatives.

With close to 2,000 stores in 49 states, Tractor Supply Company (NASDAQ:TSCO) can proudly call itself the largest rural-lifestyle retailer in the U.S. The company has reported strong growth during the pandemic as more people tended to their homes and farms during the crisis. Its latest fiscal 2021 third-quarter earnings saw another record set with net sales rising 15.8% YOY and comparable-store sales increasing by 13.1%. The quarter also saw the company report its sixth consecutive quarter of double-digit comparable-store sales growth, and Tractor Supply raised its full-year 2021 guidance on expectations of record sales and earnings.

The company was already growing steadily over the years as it executed its "Life Out Here" strategy. Net sales in fiscal 2016 rose from $6.8 billion to $10.6 billion in 2020, while net income increased from $437.1 million to $749 million over the same period. This track record of consistent growth demonstrates that the company has the secret sauce to garner more customers and continue growing its market share. Dividends per share also more than doubled from $0.92 in 2016 to $2.08 this fiscal year.

Tractor Supply's Neighbor's Club loyalty program has already hit 22 million members and counting, and the company reported double-digit e-commerce sales growth for an impressive 37 consecutive quarters as it doubled down on technology to serve customers safely during this pandemic. Tractor Supply has identified a total addressable market of $110 billion and believes it could, in time, grow its number of stores around 25% to hit 2,500.