Popular cryptocurrency Shiba Inu (CRYPTO:SHIB) sounds like a joke to many investors. I mean, fellow crypto coin Dogecoin (CRYPTO:DOGE) was launched as a literal joke and its developers still market Dogecoin as the token "favored by Shiba Inus worldwide." The actual Shiba Inu coin is clearly just another gag on top of that joke, right?

Yes, Dogecoin was always meant as a joke. And yes, Shiba Inu's skyrocketing surge carries some of the same overtones -- but this token is actually a very different beast. 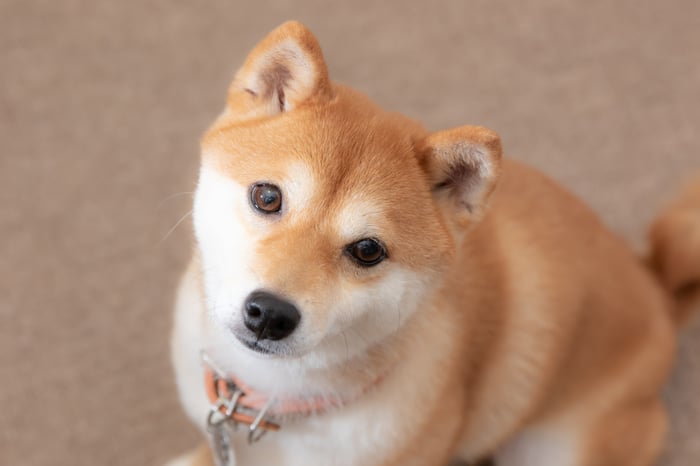 This particular Shiba Inu puppy is not affiliated with Dogecoin or its namesake token. It's a cute one, though. Image source: Getty Images.

Let's start with a closer look at Dogecoin.

In the project's own words, "Dogecoin is a decentralized cryptocurrency based on the doge meme." That's the most technical description you'll find on the Dogecoin website. There's a link to the source code behind the currency, but even that resource makes short work of Dogecoin's technical background and operating model.

Most cryptocurrencies come with detailed whitepapers, explaining the underlying technology along with long-term development plans and potential pitfalls. Dogecoin skipped that step, referring to the original Bitcoin (CRYPTO:BTC) design instead. That ancestor of the whole cryptocurrency space was also the basic design model for Dogecoin's blockchain network and digital token, but you'll have to learn from other sources that Dogecoin's actual parent project wasn't Bitcoin itself.

Instead, the meme-based currency with an adorable mascot tweaked the design parameters of defunct currency Luckycoin and that token's own parent project, Litecoin (CRYPTO:LTC). In turn, Litecoin is an altered version of Bitcoin. So you could call Dogecoin the great-grandchild of Bitcoin with a few technical tweaks along the way.

Thanks to this surprisingly solid ancestry, Dogecoin actually does offer a proven technology platform that does many of the same things as Litecoin or Bitcoin. It's a simple token that can store, carry, or trade monetary value as people buy and sell it. Advanced features such as smart contracts and sharding are nowhere to be found.

At the end of the day, Dogecoin is still a joke. It's just a very popular joke with 3.4 million investors and a market cap of $34.6 billion, but the meme-based focus is firmly in place today.

The Shiba Inu cryptocurrency is quite different.

Sure, the coin taps into the same dog-based meme as Dogecoin in order to boost its public profile with a friendly image, but that's where the similarities end.

Shiba Inu does come with a serious whitepaper, outlining its technical details and long-term goals. It's called a "Woofpaper" just to keep the tone light, but we're talking about a serious foundational document here.

And if you read that essay, you'll find that the currency is actually a research project with some lofty goals.

Digging deeper, you'll see that Shiba Inu comes with a short but fascinating history and a complex technology system. If you thought that Shiba Inu was just another carbon-copy clone at the end of the chain stretching from Bitcoin to Dogecoin, you've been barking up the wrong tree.

Final verdict: No, Shiba Inu isn't a joke (but I'm not buying it, either)

So this token is not a literal joke in the way that Dogecoin is. At the same time, it's more of a testing ground for community-driven cryptocurrency development than a valuable investment vehicle.

Among other things, I'm not entirely comfortable with the way Shiba Inu's backers want to tap into the rabid meme stock phenomenon. The token has been known to skyrocket on the strength of a single, cryptic Tweet from Tesla CEO Elon Musk. That sort of thing would be a silly and forgettable oddity for most stocks and cryptocurrencies, but Shiba Inu was actually designed to inspire and support such moves.

So we have a rock-solid token with a complex and interesting technical platform here, but Shiba Inu still doesn't strike me as a long-term investment. There are many superior ways to get into the cryptocurrency market, and Shiba Inu is going through a super-sized correction right now. Trying to catch that falling knife could leave you howling in pain.