If you backed up the truck and loaded up on Camping World (NYSE:CWH) stock earlier this year, you may be feeling like one happy camper. The recreational vehicle dealer's stock has surged about 60% year to date, compared to about 25% for the Standard & Poor's 500 Index. Several trends driving that growth could give Camping World enough gas to keep rolling. 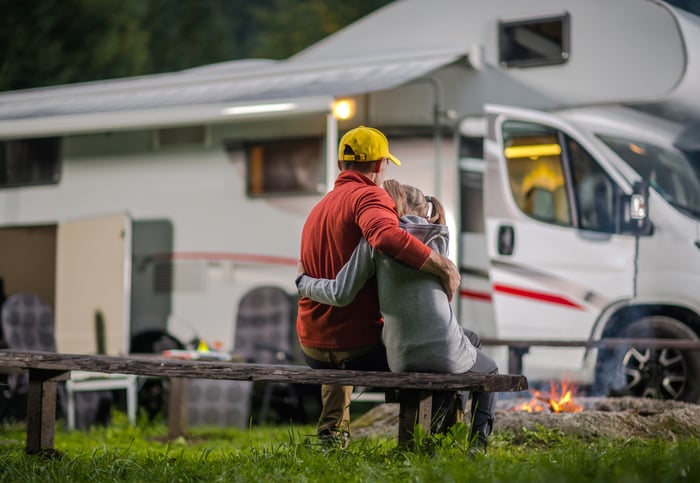 Not just an RV dealer

Camping World, based in Lincolnshire, Ill., reported a 14.2% increase in revenues and a 22.3% rise in net income for its third quarter ended Sept. 30. Chalk it up to a pandemic surge. Americans no longer tethered to offices decided they could hit the road, and they turned to RVs. Demographics also played a role with more Baby Boomers retiring and more Millennials exploring the van life.

It's difficult to find a comparable company to Camping World. Lazydays Holdings (NASDAQ:LAZY) is very similar with a chain of dealerships and a slew of product offerings for outdoor enthusiasts. Its stock is up more than 29% year to date. In a highly fragmented industry, Camping World is much larger, with a market capitalization of more than $3.5 billion compared to Lazydays' $230 million.

Camping World also has a much broader strategy, having built a universe of interlocking companies that form a whole community among RV enthusiasts. In addition to dealerships across the country, Camping World owns the iconic Good Sam Club, which boasts more than 2.1 million members around the world and dates back to 1966. The company leverages connections through the club not only to sell new and used RVs, and all the outdoor gear to go with them, but also to offer property and casualty insurance programs and vehicle financing, protection plans, and roadside assistance. The company also runs a peer-to-peer RV rental platform and is launching Electric World, selling electric trucks and ATVs.

Camping World reported record high cash flow for its third quarter. and CEO Marcus Lemonis raised cash flow guidance for all of 2021. The company's improving cash situation suggests that the trends driving the company's growth have not significantly waned.

With nearly 53% of the company's voting power as of its most recent proxy statement, Lemonis is Camping World's biggest individual investor, and he's aded to those holdings over time , which is always a good sign. Those purchases suggest that Lemonis, who has been successfully growing the company since 2006, expects the good times to keep rolling.

Bumps in the road

Camping World has some unhappy campers. It's been hit with a series of bad reviews, media campaigns, and even lawsuits from dissatisfied customers and  disgruntled employees, and disillusioned shareholders. Some customers have complained of faulty vehicles,  shoddy service, delays in making repairs, and the company not honoring its warrantees. Some employees have complained of chaotic and even toxic work environments, as well as layoffs. Last year, the company settled shareholder lawsuits alleging that Camping World put out false information about its financial performance.

The company is not accredited by the Better Business Bureau and has slew of "one-star" reviews on its site, as well as negative reviews on many other sites. There's no predicting the outcome of bad publicity and pending lawsuits. The company has warned in a regulatory filing: "Negative publicity from litigation, whether or not resulting in a substantial cost, could materially damage our reputation and could have a material adverse effect on our business, financial condition, results of operations, and the price of our Class A common stock."

A company as large as Camping World, and one that is involved in selling used vehicles, is bound to draw lawsuits, complaints and bad reviews. So far, these issues haven't thwarted the company's growth, but could in the future if they continue. Arguably, Camping World needs to do more to defend its reputation, which would include satisfying its key stakeholders.

Camping World's scale gives it a competitive advantage in a highly fragmented industry, with more than 180 locations in 46 states. But it does not enjoy an uncrossable economic moat. There are more than 2,600 RV dealers across the U.S.  Larger dealers may have a wider reach, but smaller competitors may be able to provide better service and a more specialized line of products. And with so many smaller dealers, the industry is ripe for mergers that could create larger competitors.

Additionally, a sharp rise in interest rates, a dip in the economy, continued high fuel prices, or a mass return to the office could dampen the favorable trends that have kept the company on a sustained upswing.

Should you buy Camping World?

Given its soaring stock price, the market currently doesn't seem concerned about Camping World's raft of consumer complaints or the risks to the economic and demographic trends driving its growth. If revenue were on the decline, the market would likely take note of these issues, but the business is growing and the stock price is rising.

Blemishes aside, Camping World has built a solid and sustainable business model, and it has demonstrated its capacity for long-term growth. Its stock is up more than 125% over the past five years. Its revenues have nearly doubled over the past five years. The stock market, overall, is pricey, continually setting new highs. Camping World has been a beneficiary of this trend as well, but its stock is trading at about $42, comfortably below its 52-week high of $49.20.

For now, investors might want to watch for another pullback in its soaring stock price, but the company is well-positioned for long-term growth and represents a solid bet for the future.