Following a lengthy struggle to avoid delisting by the Nasdaq Stock Market because its shares trade under $1, swimwear and lingerie company Naked Brand Group (NASDAQ:NAKD) saw its shares skyrocket 43% in after-hours trading on Nov. 8. The catalyst was an announced merger with privately held electric vehicle (EV) company Cenntro Automotive Group.

At this point it's unclear if Naked will effectively cease to exist or will continue making lingerie, but it will cease operating under its own name, taking Cenntro public in the process, almost as if it were a special purpose acquisition company (SPAC). Here's what it could mean for investors, with the move potentially bullish if Cenntro can live up to its growth goals.

Naked Brand has seen many ups and downs during 2021, including its near-removal from the Nasdaq exchange. Back at the year's start, its shares rose to $1.65 as it briefly became a meme stock, though its appeal soon faded and its stock slipped below $1 in late March.

On April 24, the index sent a noncompliance warning to Naked after its shares traded under $1 for 30 consecutive days. At that point, Nasdaq officials gave Naked the standard 180 days to raise its bid price above $1 for 10 consecutive days to comply or be taken off the index. 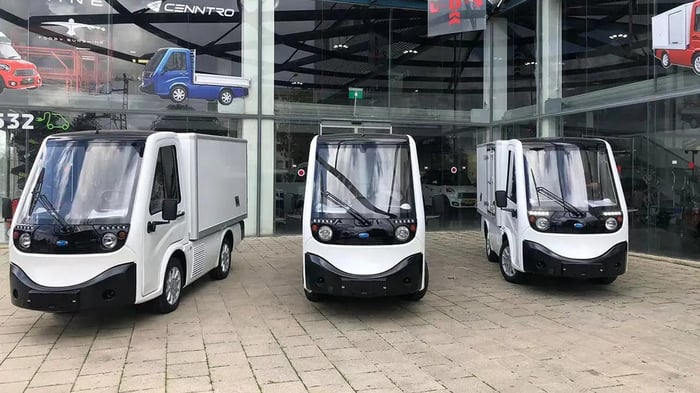 Naked failed to meet the deadline by the Oct. 26 deadline, but Nasdaq granted a 180-day extension on Oct. 27. The company must now comply by April 25, 2022. This is not the first time the company has been out of compliance, with a similar scenario playing out in 2019, complete with a similar extension. It also came close to Nasdaq delisting in 2020, only to be saved by its meme-stock surge.

Naked has tried to find a merger partner for several months, apparently deeming this the best means to avoid delisting. Its stock rose and fell as investors responded to various potential merger agreements, only to see each attempt fail. Most recently, Naked said in September it was planning to combine with an unnamed company in the clean energy space, but its shares fell 15.3% in October after the deal didn't happen. The volatility this quest caused never pushed it above the $1 threshold.

Naked appears to finally have a firm commitment to a merger in its current pact with Cenntro Automotive. According to the details of the deal, Naked will buy out Cenntro using a stock-for-stock transaction before the end of 2021. The resulting merged company will have the name Cenntro Automotive Group, and current Cenntro shareholders will own a 70% stake in the combined entity, giving them a controlling interest above the 30% held by current Naked shareholders.

Naked's acquisition of Cenntro is clearly extinguishing Naked as a swimsuit and lingerie company, meaning Naked is acting in a manner very similar to a SPAC and launching an effective initial public offering (IPO) for Cenntro through the merger. Naked is bringing $282 million in cash to the deal, after already providing Cenntro with a $30 million loan to help it ramp up its EV production.

Naked will spin off FOH Online, the e-commerce branch of Frederick's of Hollywood that it acquired back in 2018 for $18.2 million, as part of the merger process. Curiously, the new Cenntro will continue trading under the NAKD ticker on the Nasdaq exchange, according to the press release.

Cenntro's control of the newly merged company extends beyond shareholders to the executive suite. It will appoint all but two members of the board of the directors, those two board members being Naked's current CEO, Justin Davis-Rice, and Simon Tripp, its non-executive director. Control of the combined entity will therefore mostly pass to Cenntro. The press release does not indicate at this point how many directors in total will be on the Board of the new combined entity.

Cenntro CEO Peter Wang said his company had been preparing an IPO in any case, but the Naked Brand merger "allowed us to go public faster, providing the working capital to support our substantial backlog." He also cited "the opportunity to gain such a loyal and enthusiastic shareholder base, such as the 'Naked Army' and [Naked's] other shareholders" as another motivating factor.

What will be the fate of the new Cenntro?

Cenntro isn't a household name, but that's because it produces EVs for commercial and municipal use, rather than passenger cars, which typically attract the most media attention. Unlike many smaller EV companies with vehicles that haven't moved beyond the drawing board or hand-built prototype stage, Cenntro is actually manufacturing EVs and selling them to clients in 26 countries.

According to information on its website, Cenntro has delivered more than 3,300 electric commercial vehicles to date, which have collectively traveled in excess of 20 million miles. The company expects the following sales and revenue figures for the current year and upcoming years:

These are ambitious targets, with an almost 50-fold increase in deliveries expected within two years. But Cenntro has the advantage of its positioning in a sector of the EV market where skyrocketing demand is expected. A December 2020 market research report by MarketsandMarkets projects a compound annual growth rate (CAGR) of 41.1% for electric commercial vehicles worldwide through 2028.

The report notes that the segment generating the highest demand and growth is electric vans, Cenntro's specialty. If this and similar reports are accurate, the company is operating in a specific market with an even higher CAGR over the coming decade than the EV market overall -- where, with passenger-vehicle growth rates figured in, a 26.6% CAGR is anticipated through 2031, according to analysis firm Transparency Market Research or TMR.

While online commentators are mocking the lack of synergies in a merger between an electric delivery van manufacturer and a maker of swimsuits and sexy lingerie, the pseudo-SPAC merger could actually have potential. Cenntro already has fully developed vehicles in production and on the road, and is operating in a growth sector of the EV market. Going public, and receiving a $282 million cash infusion from Naked Brand, could be exactly what it needs to kick-start expansion and make the most of current opportunities. Naked investors may soon find themselves holding a new but bullish electric car stock, rather than an apparel stock, and the merger is worth watching for growth potential.