The marijuana boom amid the pandemic benefited the U.S. cannabis companies. Sales also jumped in Canada, but some external headwinds (like lockdowns in certain provinces and lack of legal stores) challenged the revenue of Canadian cannabis companies. The slow pace of revenue growth is also delaying these companies in achieving positive earnings before interest, tax, depreciation, and amortization (EBITDA).

Despite multiple attempts, Canadian cannabis companies are struggling to be profitable. While investors were eagerly waiting for some turnaround, Canopy Growth (NASDAQ:CGC) a popular name in the cannabis space, disappointed with its second-quarter earnings (ended September 30). So far this year, its stock is down 47% compared to the industry benchmark, the Horizons Marijuana Life Sciences ETF's gain of 4%.

Let's dive into its Q2 results and determine whether investors should/shouldn't give up on this pot stock. 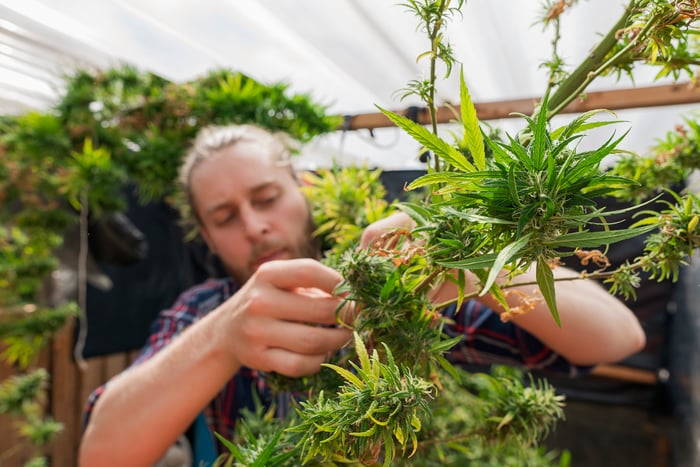 For the second quarter, Canopy's net revenue fell 3% year over year to $131 million. Compared to its peers, Canopy Growth has launched a wide array of derivatives (additional recreational products that Canada legalized in October 2019) into the market in Q4 of fiscal 2021.

However, the recreational market faced some supply challenges in the quarter, according to the management. Canadian recreational cannabis sales (minus excise taxes) declined 4% year over year to CA$58 million from CA$61 million in the year-ago quarter.

Canopy also saw another quarter of EBITDA losses that came in at CA$163 million compared to CA$85 million in the year-ago quarter. Management stated the EBITDA losses widened because of a decline in revenue and gross margins (that was a negative 54% for the quarter).

Growth strategies look good, but Canopy needs to be careful

In October, Canopy announced its plans to acquire Colorado-based Wana Brands (upon federal legalization), which is the No. 1 "cannabis edibles brand in North America by market share," according to the press release. This acquisition will help Canopy strengthen its footprint in the U.S. as Wana has a market presence in 12 states -- which it expects to grow to 20 by the end of the 2022 calendar year.

It is impressive that Canopy is expanding into the U.S. markets by partnering up with strong players. It also has another partnership deal with U.S.-based hemp company Acreage Holdings, also contingent on federal legalization.

But the company cannot sell its products until the U.S. legalizes marijuana, which is a long shot for now. Even when that happens, the domestic players will be the first to benefit. So spending money on acquisitions right now might burden Canopy's balance sheet.

For now, the company has a strong backup, as U.S. beverage giant Constellation Brands (which invested in the company in 2018) is doing most of its heavy financial lifting. Still, unless Canopy starts generating profits, I have to wonder how long this backup will keep it safe. The company also pushed its positive EBITDA target to the end of fiscal 2022.

High hopes from the U.S. cannabis market, but...

The U.S. cannabis market is burgeoning right now, which is evident from the success stories of the domestic players. But I believe Canopy should focus on growing its revenue in its home market and globally instead of spending haphazardly on acquisitions now. Unless the company is profitable, expansion in the U.S. will pose many challenges when legalization happens. Canopy ended its second quarter with cash and short-term investments of $2 billion.

Out of the $150 million to $200 million in cost savings that it expects to generate by the first half of fiscal 2023, the company has already realized $70 million as of the second quarter.

Moreover, the U.S. cannabis companies are in much better shape financially to grab the market opportunity (when legalization happens); most of them are profitable too. Though Canopy is a good cannabis stock and has the potential to shine, unless Canopy manages to grow its revenue and hit its EBITDA target, I would advise investors to stay away.