Wall Street had a positive day on Tuesday, buoyed by news of strong retail sales figures in the U.S. economy. Consumers have remained strong, having ample financial resources on average and doing their best to maintain their purchasing power despite inflationary pressures. The Dow Jones Industrial Average (DJINDICES:^DJI), the S&P 500 (SNPINDEX:^GSPC), and the Nasdaq Composite (NASDAQINDEX:^IXIC) all managed to see gains on the day.

After the closing bell, however, earnings reports from several companies showed that not everything was working in the stock market. Below, we'll look at why StoneCo (NASDAQ:STNE) and Dolby Laboratories (NYSE:DLB) were losing ground late Tuesday afternoon.

Shares of StoneCo were down more than 9% after hours on Tuesday. The Brazilian fintech company saw continued growth, but some key performance metrics appeared to weaken.

Overall, StoneCo had a lot of good things to say. Annualized revenue climbed 57% from year-ago levels, reflecting strength both in financial services and software solutions. The company added almost 294,000 clients, falling just short of reaching the 1.4 million mark in active payment clients. It saw particularly large gains from its small and micro-size business segment, where total payment volume was up 81% year over year. Organic revenue growth came in at 53%. Meanwhile, the acquisition of Linx helped software-related revenue soar from year-earlier levels.

However, StoneCo faces competition. PagSeguro Digital (NYSE:PAGS) reported its earnings last week, and its stock gained ground after sales and earnings came in better than many had expected. Although the two companies have historically served different niches, they have started to encroach on each other's territory as both have grown.

The drop threatens to send StoneCo's stock to its worst levels since the pandemic-induced bear market in early 2020. The company is still growing, but it'll need to reignite a faster pace of growth to satisfy investors and their quest for longer-term business success. 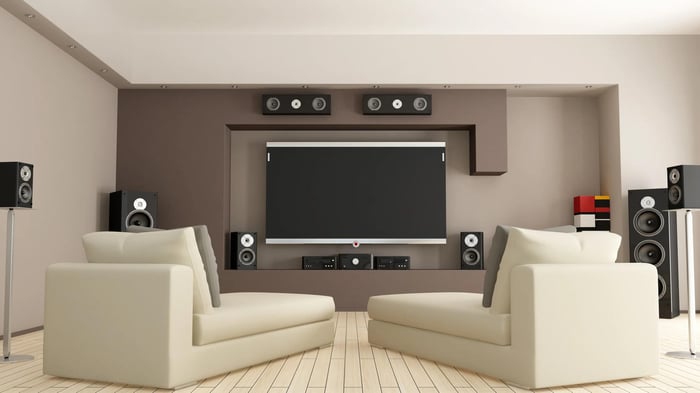 Elsewhere, shares of Dolby Labs were down almost 8%. The sound specialist saw revenue growth slow to a crawl even as it announced key product partnerships that could generate longer-term gains.

Some of Dolby's financial numbers were discouraging. Revenue for its fiscal fourth quarter rose just 5% year over year to $285 million. But the bottom line looked somewhat healthier, with adjusted earnings per share of $0.58 coming in well ahead of the $0.45 that Dolby brought in during the year-earlier period.

The company also reminded investors of some big wins, with the inclusion of its Dolby Atmos technology in Mercedes-Benz vehicles, live concerts at MGM Resorts International's (NYSE:MGM) new Park MGM casino resort, and the availability of Dolby Vision on Vimeo and in Microsoft's (NASDAQ:MSFT) latest line of Surface devices.

Nevertheless, shareholders seemed not to like the company's outlook, which called for uncertainty about global financial markets. Guidance for fiscal 2022 sales growth of less than 10% and earnings that could fall from fiscal 2021 levels weren't very ambitious. Investors hope those predictions will prove to be conservative, but for now, the stock is reflecting the possibility that Dolby won't be able to beat them.