Do dropping prices spell disaster or a buying opportunity?

Earnings season is always an exciting time for investors. But when earnings don't come in as expected, it may not be a great time for their stocks. And "as expected" can have multiple meanings, from the company's expectations to the consensus on Wall Street to an investor's personal ideas.

Take for example both Lemonade (LMND -1.25%) and Upstart Holdings (UPST -4.80%). Both companies posted excellent third-quarter earnings reports, but the market wasn't happy anyway, sending their stock prices down. Does that make this a buying opportunity? 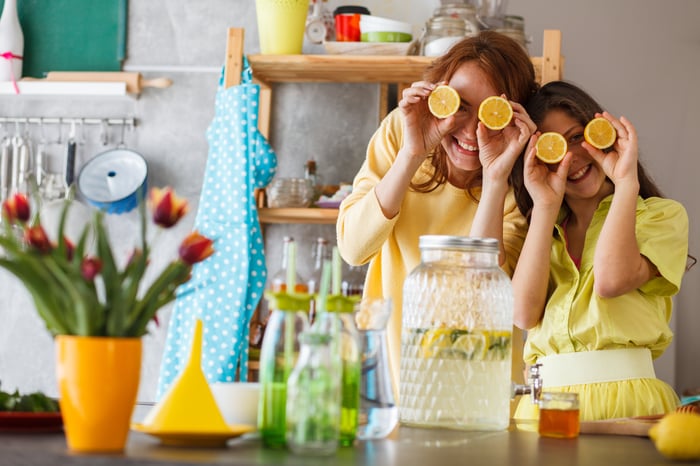 Lemonade is getting a lot sweeter

Lemonade posted a mostly outstanding quarter. In force premium, which has the complicated definition of "average aggregate annual premium," and is calculated by multiplying total customer count by average premium per customer, increased 84% year over year. That was helped on by a 26% increase in premium per customer. Customer count increased 45% over last year, and gross earned premium, or the total premium for the quarter, increased 86% to $80 million. A nice surprise was that revenue, which had been decreasing based on changes in its agreements with third-party reinsurers, increased 101% to $36 million.

Now for the parts that weren't as nice. Net loss more than doubled year over year, from $31 million last year to $66 million this year. Management already warned investors about an increase in sales and marketing costs, and between those and expenses for its new launches, it may be in the red for a while. Loss ratio also increased from 72% last year to 77% this year. The company says that newer forms of insurance have higher loss ratios, and as more of its book is newer policies -- which is  good thing -- the loss ratio will be somewhat higher. Renters insurance fell from 70% of the total last year to 53% this year.

That's part of Lemonade's overall strategy of bringing in customers for one type of policy and getting them to stay with the company and purchase a large set of policies. It's rapidly launching new products, which is taking a toll on the bottom line, but it's aggressively courting customers for its newer policies.

Two big announcements over the past two weeks that bolster this strategy are the rolling out of car insurance and the acquisition of auto insurance competitor Metromile. However, investors weren't keen on the Metromile acquisition, since it's also bleeding cash. Net loss increased from $9 million in the second quarter of 2020 to $41 million in Q2 2021. However, Lemonade sees it as a quick and painless way to break into the auto insurance market.

As for the fourth quarter, management expects in force premium to increase around 80%, and revenue to increase about 100%.

Lemonade is looking both more risky now, with its finger in many pies and a widening loss, and like a great growth stock. Those often go hand in hand, and if you're risk tolerant, you may want to pick up some shares at the lower price. Upstart is slowing down

Investors have been scooping up shares of Upstart all year as the new IPO stock has been posting super-high growth. That came to a relative stop in the third quarter, and relative means that it beat expectations of about 215% year-over-year growth to post a 250% revenue increase  in the third quarter. Investors and analysts may have been expecting a bigger beat, but as the company scales and has a better idea of how the business is growing, guidance is likely to be more on target.

It's also projecting a further slowdown in growth into the fourth quarter of about 200% year over year. That's still pretty impressive.

Here are the reasons why Upstart still looks like an enticing investment. It's small, with less than $500 million in trailing-12-month (TTM) revenue, and it's posting phenomenal growth. It grew from 10 to 31 clients year over year in the third quarter, spreading out its risk, and it's likely to keep adding to that list as banking clients catch on to what it can do for them. The company's artificial intelligence platform helps banking and other loan partners identify true risk, so they can approve more loans with less risk -- definitely a win-win for both banks and borrowers.

It also posts a profit, which, as we see with Lemonade, is not a given with growth companies. Finally, it's making moves to keep growth high, such as acquiring auto loan software company Prodigy last April, which it has rebranded as Upstart Auto Retail. The company also said it would be targeting mortgages in 2022, which adds another huge market to its business.

Valuation still remains high even at the lowered price, with shares trading at 266 times TTM earnings. But a premium on a company like this may be worth it, since Upstart offers many years of high growth to grow into its valuation and bring gains to investors.