Another data center REIT is sold, Rivien eyes Georgia, and reasons to believe real estate prices could continue rising -- or not.

Make it two data center REITs sold this week, as an upstart truck maker is said to be eyeing an Atlanta site, consumer and homebuilder confidence appear to be on the rise, and we take a look at real estate prospects for the year ahead.

CyrusOne (CONE) has agreed to a buyout deal: Private equity giants KKR (KKR 0.33%) and Global Infrastructure Partners (GIP) are paying a total of $15 billion for the data center real estate investment trust (REIT). The agreement ends weeks of speculation that the REIT was about to get acquired.

This is the second such deal this week, and the third this year. Motley Fool contributor Matthew DiLallo lays out here how this flurry of activity dramatically alters the landscape of the data REIT sector as their operations get bought up for integration into the greater digital infrastructure ecosystem. 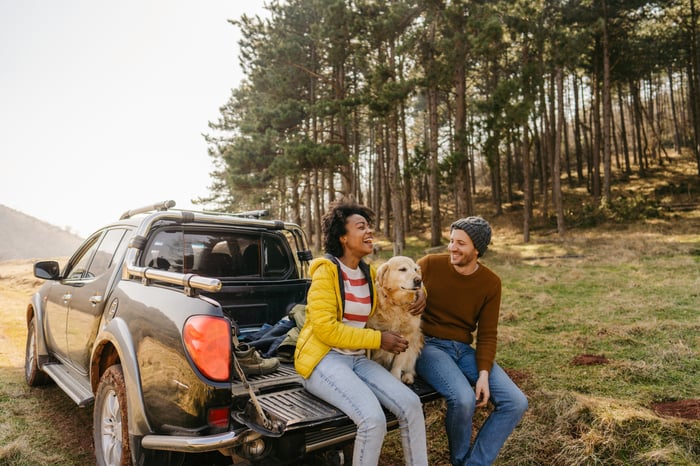 Reports in the automotive and local media say Rivian Automotive (RIVN 8.30%) will choose a site in Georgia for its second factory, one the electric truck maker will use to produce vehicles and batteries.

Rivian just went public last week, and its stock has been hot since. Of particular interest in this space is where exactly this site will be -- the reports vary widely -- because once that's official, real estate investors will quickly begin considering opportunities for nearby residential, retail, and industrial growth (think spinoff suppliers).

American shoppers are apparently defying inflation and the lingering effects of the pandemic, driving increased sales at auto dealerships, retail stores, and especially online, according to U.S. Commerce Department figures out today.

That consumer confidence bodes well for the economy -- including that segment of investors with funds tied up in rebounding malls and other brick-and-mortar businesses. We'll see what happens if inflation continues to rise, but right now, it doesn't seem to be dampening the holiday sentiment.

The National Association of Home Builders (NAHB) says today that industry confidence has risen for the third straight month, despite supply-side struggles around building materials, labor shortages, and even places to build.

The trade group says that lot availability is at multidecade lows, and the construction industry currently has more than 330,000 open positions nationwide. That could all help keep new residential construction moving quickly at record prices in the months ahead.

Are real estate prices going up in 2022?

After a record year for home price growth, it's natural to wonder if real estate prices will continue to increase in 2022. Some experts believe the market will continue to heat up, albeit at a slower pace, while others say the market could take a turn for the worse.

Since no one has a crystal ball, we'll let the data do the talking. Motley Fool contributor Liz Brumer-Smith does her part by taking a closer look here at where prices could be heading next year.

What Should CyrusOne and CoreSite Shareholders Do Now?