And it might not even deserve much attention, except for one thing: Sometime within the next two months, dMY Technology Group will bring the biggest constellation of Earth observation satellites ever created public in a deal valued at $2.8 billion. 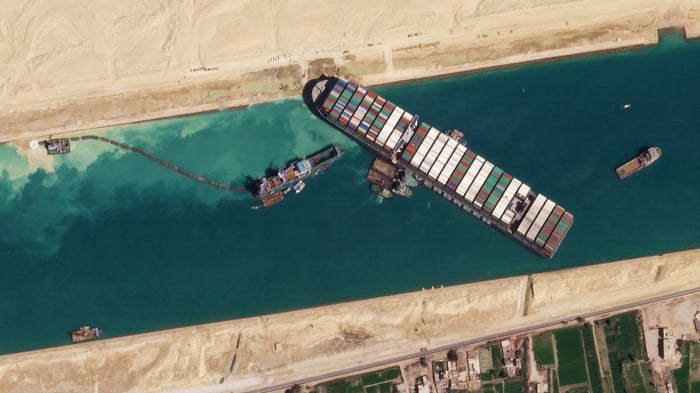 Raise your hand if you remember this picture. Planet took this photo -- from space! -- of the Ever Given container ship stuck in the Suez Canal. Image source: Planet.

Get to know Planet

In case you aren't familiar with the company yet, a few words of introduction are in order. Planet (aka Planet Labs) set up shop 10 years ago, according to data from S&P Global Market Intelligence, with two engineers tinkering around in a proverbial Silicon Valley garage, trying to build an economical cubesat that could take pictures of Earth from orbit.

Over the past decade, Planet has grown into the world's largest Earth imaging satellite constellation, with nearly 200 satellites in operation. Just under two dozen of these satellites are "SkySat" hi-resolution satellites acquired from Google in 2017. Medium-resolution "Dove" and "SuperDove" satellites comprise the bulk of this satellite fleet -- 6 kg satellites that cost less than $300,000 each to build and launch.

A brief chat with the CEO

A few weeks ago, I had the opportunity to speak with Planet CEO and co-founder Will Marshall about Planet and its plans to grow post-IPO.

One of the first things Marshall pointed out to me was that the quality of Planet's satellites is constantly improving. Over just the past three years, Planet has grown the size of its constellation by 33%, but grown the number of images it takes daily by more than 100% to three million images per day. Helping to drive improvement is the fact that Planet's satellites are designed for short lifespans (just three years for the Doves and five years for the SkySats), so obsolete satellites are constantly dropping out of orbit and being replaced with more advanced models.

That means that every three years Planet essentially upgrades its entire satellite fleet to a full set of more advanced models. And yet the cost of this improvement is quite reasonable: about 10% of annual revenue -- and less in future years as revenue rises but hardware replacement costs hold steady.

Looking at the top line

And speaking of revenue, although not yet public and not yet required to do so by the SEC, Planet published an abbreviated fiscal Q2 2022 earnings report in September, showing that it recorded $30.4 million in revenue, up 19% year-over-year. That's not a bad rate of growth -- but it's nothing compared to the numbers that Planet is promising for the future.

As Marshall explains, since putting its first "flock" of Dove satellites in orbit in 2014, Planet has spent the last six years growing the constellation and finding the right markets for the images it collects. Both of those missions are now basically accomplished -- Planet is happy with a constellation size of 200-ish satellites, and it's got a good balance of customers spread out among the agricultural industry (which can use its data to monitor crop health), civil government (monitoring weather, wildfires, pollution, and so on), defense and security (i.e. troop movements), and mapping companies (self-explanatory).

Now Planet is ready for the next stage of its growth. It's hiring more salesmen and expanding its customer base within these target markets, and optimizing its business to maximize profit. This is what the company's IPO cash will be used for.

Even during the pandemic last year, Planet managed to grow its work pipeline 45%. Now the company is laying plans to keep growing at about 44% annually over the next five years, like so:

What makes Planet attractive to investors

You can see the pattern here: Not only does Planet expect to grow quickly, but it expects to accelerate its growth with each passing year over the next four years, plateauing only in 2026.

Moreover, as revenue grows while satellite replacement costs hold steady, gross margins should rise steeply, and more and more profit will fall to the bottom line. Indeed, between 2021 and 2026, Planet expects to nearly double its gross profit margin from approximately 40% this year to 74% five years from now.

The company thinks is can begin generating positive cash profits about halfway through this process -- say the 2023/2024 timeframe. And by the end of it, Planet expects to be converting 20% to 35% of its revenue -- still growing in the 50% range, mind you -- into real free cash flow.

If all goes as planned, this should add up to a significant growth story for investors.