Zynga's (NASDAQ:ZNGA) share price got a nice bounce last week after it reported strong third-quarter earnings results. The mobile-game developer reported a sequential decline in bookings (a non-GAAP measure of revenue) over the second quarter, but bookings still grew 6% year over year, driven by a higher contribution from in-game advertising.

The growth in advertising was a notable surprise given the anticipated negative impact of Apple's new privacy changes in iOS 14.5 that limits app developers' ability to track users across apps for advertising purposes.

The stock price had been falling in recent weeks, partly on concerns that Apple's new policy would pressure Zynga's in-game advertising business, but the mobile game maker is clearly navigating around this headwind just fine. Here's why the stock is a great buy at these lows. 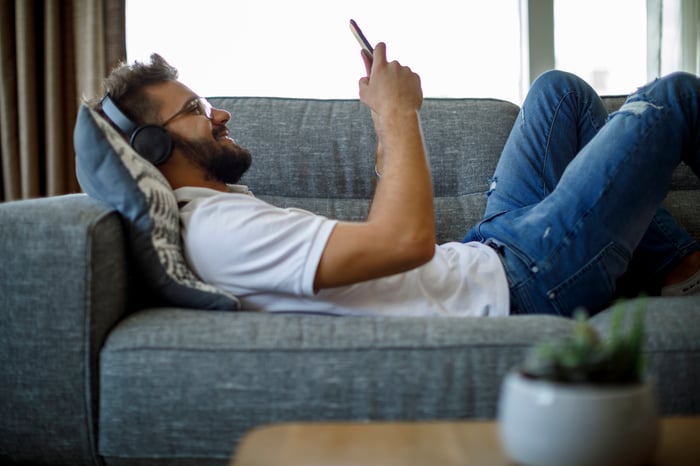 Zynga makes money primarily from in-app purchases in online games, which include popular mobile titles Words With Friends and FarmVille, with a small amount coming in from in-game advertising. Advertising bookings nearly doubled year over year and now make up about 20% of Zynga's business compared to just 11% a year ago.

Hypercasual games are free-to-play titles that are supported with in-game ads and are one of the fastest-growing categories of mobile games. Management believes Rollic's unique development process can lead to repeated successes with new hit titles.

Zynga is also looking to add more advertising capabilities to other core games, such as the recent release of FarmVille 3, which is partly monetized by giving a reward to players if they watch a video ad in the game. Watch-to-earn video ads are a common means of generating ad revenue for mobile app developers since players generally respond well to them.

Another catalyst to watch with advertising is Zynga's recent acquisition of Chartboost, which will begin to contribute to results in the fourth quarter. Chartboost won't contribute much to Zynga's total bookings at the start, but it should scale up over the next few years.

Chartboost reaches a mobile audience of 700 million monthly users, which Zynga can use to more efficiently target and acquire highly engaged players while also improving the returns on Zynga's first-party app data and advertising inventory.

Growth opportunities are stacking up

With the stock price down, investors might be underestimating Zynga's opportunity to grow advertising revenue and boost its profitability, since ad revenue generates a better gross margin than spending on in-app purchases. The acquisition of advertising tech platform Chartboost can help in this effort since it allows Zynga to capture more value with its own internal data from its game portfolio. Zynga had previously been a customer of Chartboost, but now the fees it was previously paying for ad services can be brought in-house.

Of course, Zynga must keep putting out compelling content to keep players spending time in these games in order to deliver ads. The company has a deep pipeline of releases scheduled to come out in the fourth quarter, including new updates for existing core titles, such as Empires & Puzzles, Harry Potter: Puzzles & Spells, Merge Dragons!, and Toon Blast. Zynga also just added the hit franchise Golf Rival to its portfolio with the recent acquisition of StarLark for $525 million, and it's also releasing its first cross-platform title next year with Star Wars: Hunters, which will be playable on mobile devices and the Nintendo Switch. More releases of cross-platform and hyper-casual games, along with advertising, are all part of management's plan to expand its addressable market opportunity to $240 billion.

Meanwhile, the stock is a much better value at current prices, with the price-to-sales ratio having dropped from over 6 earlier this year to 3.1. At these levels, this could be a great buying opportunity.