Among the trending cryptocurrencies, interest in the SHIB token has exploded of late. Here's what investors may want to know about Shiba Inu.

One of the meme tokens that has absolutely taken off lately, Shiba Inu (SHIB -2.98%) has seen some biblical growth this year. Indeed, SHIB has more than doubled over the past month and has been a 6-bagger over the past three months.

This sort of outsized interest in a given cryptocurrency is not uncommon. Various parabolic moves in a wide range of cryptocurrencies in recent years have been noted. However, Shiba Inu's rise to prominence in such a short amount of time is among the most impressive.

Let's dive into how this cryptocurrency has been able to erase so many zeros so quickly. After all, this token's momentum alone is a reason in and of itself investors will want to consider owning SHIB tokens.

Here are three others. 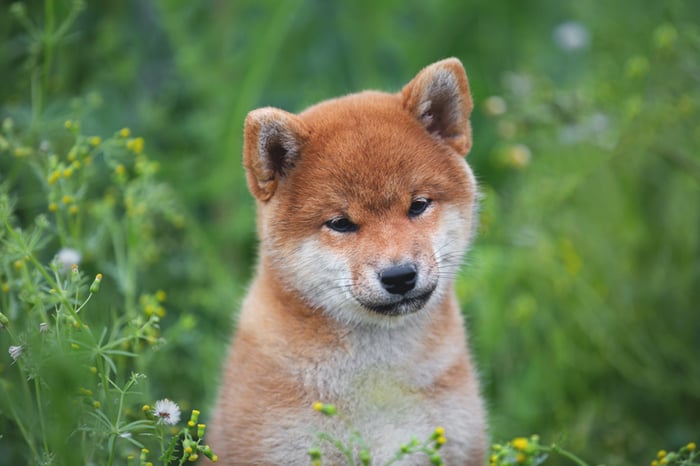 1. Elon Musk happens to be a fan

There's no doubting the influence various celebrities can have on cryptocurrencies. Indeed, this whole crypto movement is one that's reliant on sentiment within the social media space.

For investors considering Shiba Inu, or any meme token, it's important to assess where the sentiment is in the market at any given point in time.

Last month, we reported how Shiba Inu has seen a major boost from crypto-tweeting celebrity CEO Elon Musk. Nearly immediately after posting photos of his "Floki Frankpuppy" dog, Shiba Inu immediately saw an impressive surge in investor interest. This surge has continued since, pushing the SHIB token to new all-time highs, before the recent market sell-off we've seen this week.

Now, Mr. Musk does not own SHIB. However, his support for this token via his tweets has been enough for speculators.

Some may argue the fact that Elon Musk owns a Shiba Inu dog means about as much as what Elon Musk ate for breakfast that morning. However, for crypto investors, this sort of free advertising and sentiment pump is what drives momentum in these tokens. The connection doesn't always have to make sense, as long as the headlines are rolling in. Accordingly, should this token regain its speculative momentum, all bets are off concerning how high SHIB, or any meme token for that matter, could go.

Some investors may wonder why investors may choose Shiba Inu over another dog-themed token, Dogecoin (DOGE -0.73%), which gave rise to this meme token madness in the first place. After all, some may consider Shiba Inu to be effectively riding the coattails of Dogecoin's success.

That may be true to a certain degree. However, these tokens are not identical in nature.

One of the key differentiators of the two is SHIB's status as an ERC-20 token.  This means that the Shiba Inu network runs on the Ethereum (ETH 0.50%) blockchain. There are advantages and disadvantages to this.

As an Ethereum-linked token, Shiba Inu is able to be a part of various decentralized finance (DeFi) projects. This sort of functionality provides those on the Shiba Inu network with greater utility, and real-world applications for this cryptocurrency. While both the SHIB and DOGE tokens can be considered stores of value, Shiba Inu arguably provides more utility to its users. That's a good thing.

However, unlike Dogecoin, Shiba Inu is held hostage to the fees and transaction time of its parent network. Dogecoin is known to be among the faster blockchain networks in the world of proof-of-work consensus protocols. Therefore, it's a toss-up in regards to which meme token to own. They're just fundamentally different.

Those bullish on Shiba Inu will note that Ethereum's proposed move to a proof-of-stake model could be beneficial in this regard. Accordingly, there's a lot to like about this token's upside, in terms of how the Shiba Inu network is constructed.

Among the factors many considering the SHIB token will point to as reasons to own this cryptocurrency is the impressive community Shiba Inu has created. Despite more than 10,000 cryptocurrencies in existence as of May of this year, only a few are likely to survive as viable networks over the long term. The cryptocurrency tokens with the strongest communities are generally perceived to be safer than those without any sort of following.

Considering the social media prominence of Shiba Inu, as well as the various support this token has received (directly or indirectly) from influential individuals, there's an argument to be made that this is a token with the ability to stay relevant in the long run. The token was explicitly created as an experiment in community-powered cryptocurrencies, after all.

Cryptocurrencies themselves are inherently volatile, and therefore risky. Undoubtedly, meme tokens such as SHIB displaying wild momentum swings on rather speculative catalysts could be viewed as among the riskiest of all crypto tokens to own.

These risk factors ought to be noted by any investor considering such options.

However, right now, it appears the stars are lining up for Shiba Inu. This meme token has seen incredible interest morph into what could be a viable long-term community.

Considering how far and how fast Shiba Inu has run, this recent breather we've seen could be a positive in the longer-term trajectory of this token. However, it could also represent a bearish momentum trend. Right now, the jury remains out on this front. The bottom line is: those considering this token should be aware of the risks, as well as the potential upside, of such investments before piling in.