Alex Carchidi and Adria Cimino
(TMFacarchidi)
Author Bio
Alex began writing for the Fool in early 2020 and follows companies in the healthcare sector. Formerly a researcher in the biotech industry, he leverages his science background in his work as a writer and entrepreneur. His interests include exploring his hometown of Boston, traveling in Latin America, and value investing.
Follow @alexcarchidi

When it comes to relatively stable healthcare growth stocks, DexCom (NASDAQ:DXCM) and Abbott Laboratories (NYSE:ABT) just might fit the bill. Worth around $61 billion, the continuous glucose monitor (CGM) specialist DexCom is small compared to medical device giant Abbott's market cap of $228 billion -- and it's no wonder why, because Abbott makes everything from CGMs to COVID tests and even surgical tools.

Still, both companies are profitable and growing at a steady clip, and neither faces any obvious obstacles to their continued success. To figure out which of the pair is a better stock to buy today, let's investigate one perspective on each. 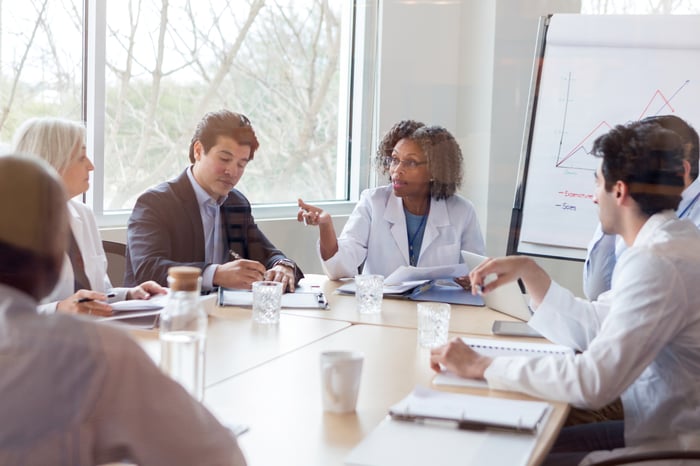 Adria Cimino (Abbott Laboratories): Coronavirus testing offered Abbott a big boost last year. In the fourth quarter, COVID-19 testing sales represented 22% of the company's total sales. After a bit of a slowdown this spring, testing demand soared again -- along with coronavirus cases. In the past, governments ordered Abbott's tests. But more recently, private companies also have signed deals with Abbott to get tests for their employees. In the third quarter, Abbott's tests generated $1.9 billion. We may expect these tests to remain an important part of the Abbott picture. Here's why: Experts have said the coronavirus will stick around. And that means the need for testing won't go away.

Still, coronavirus testing probably won't be a sure and steady thing. Demand will ebb and flow according to coronavirus case rates. And that's why it's great to see growth in all four of Abbott's businesses: diagnostics, medical devices, established pharmaceuticals, and nutrition. The company's strength is in this diversification. We saw this during the worst of the pandemic. Medical device sales slumped as hospitals postponed procedures -- but growth in diagnostics compensated to a certain degree.

In the third quarter, diagnostics, medical devices, and pharmaceuticals each posted double-digit revenue growth. Importantly, the medical device unit is thriving once again. That's because hospital procedures have resumed. The medical device unit is key since it contributed the most to total revenue prior to the pandemic. Diabetes care also continued to drive this business' growth in the most recent quarter. Sales of Abbott's star product – the FreeStyle Libre CGM system -- soared more than 41% to $968 million. At least three newly cleared products and the acquisition of commercial-stage company Walk Vascular should further boost the business. And here's another plus: Two important financial measures -- return on invested capital and free cash flow -- are on the rise. This is a sign of this company's strength moving forward.

Alex Carchidi (DexCom): DexCom's CGM devices are a marked improvement over standard blood glucose testing, and that's what is driving the company's returns for shareholders over time.

In contrast to the legacy method for measuring a diabetic individual's blood glucose levels with a pin prick to draw blood from their fingertip, the company's monitors are attached to a patient's skin at all times. That means the device can constantly feed information to the patient's smartphone, helping them to achieve superior control over their symptoms without the discomfort of being sticked multiple times per day. Impressively, 80% of people with type 2 diabetes who use DexCom's products report that it helps them to manage their symptoms even when they aren't wearing the device, perhaps thanks to the glucose level tracking software that comes with the monitoring package.

In Q3, the company reported that its quarterly revenue was growing at a rate of nearly 30% year-over-year, which is another piece of evidence that its value proposition is clearly resonating with its customers. In fact, this year's sales of DexCom's monitors were so hot that it had to update its full-year guidance to account for higher than expected revenue and a stronger profit margin.

Now, it expects to make as much as $2.45 billion rather than its prior expected high water mark of $2.40 billion. That's hardly an impressive increase, but it does show that its fortunes are improving at a quickening pace, which is a positive sign for shareholders. And, with new versions of its CGMs launching regularly, there's a built-in drumbeat of catalysts for future revenue growth.

Both are good bets

Neither Abbott Labs nor DexCom is likely to stop growing anytime soon. But, Abbott is almost certainly the safer stock to pick because its business is vastly more diversified than DexCom's. Plus, Abbott's products serve a huge variety of different types of customers, meaning that its revenue base is incredibly resilient.

On the other hand, over the last three years, DexCom's stock has crushed the market, racking up a total return of greater than 365% in contrast to Abbott's growth of 94% and the wider market's expansion of nearly 83%. That makes sense, as DexCom is a much smaller company, which means it's more likely to grow faster than a juggernaut like Abbott. So, if you're looking for a safe play, Abbott is by far the better choice, though DexCom is likely the winner when it comes to thumping the broader market.