Lowe's (NYSE:LOW) investors have some more reasons to celebrate. Heading into the fourth quarter, the home improvement giant just revealed accelerating growth trends and strong earnings. And these trends helped convince the management team to forecast a blockbuster finish to the year.

Let's take a closer look at that new outlook, as well as Lowe's latest operating results, released on Wednesday. 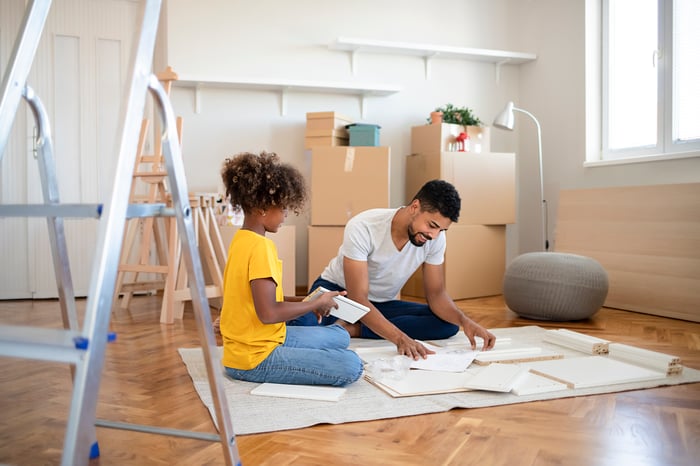 Investors were a bit disappointed when Lowe's announced its first sales decline in over a year last quarter. Comparable-store sales dropped 2% that quarter even as industry leader Home Depot reported a 3% increase.

Lowe's is still trailing its bigger rival, but the chain had plenty of good news to report on growth. Comps returned to positive territory, rising 3% in the core U.S. market. Home Depot announced a 6% spike on Tuesday.

The bigger-picture growth story is as strong as ever. Comps are up 34% on a two-year basis, which smooths out the volatility associated with the pandemic. That result is a slight acceleration over the prior quarter's 30% two-year spike. "Our momentum continued this quarter," CEO Marvin Ellison said in a press release. Management was especially happy with the growth in Lowe's online segment and in the professional contractor niche.

The earnings picture continues to brighten despite spiking costs and rising prices for many home improvement materials. Lowe's gross profit margin edged up to 33% of sales from 32.7% a year ago. Selling expenses fell, too, which allowed operating income to jump to $2.8 billion, or 12.2% of sales, compared to $2.2 billion, or 10% of sales, last year.

Sure, Home Depot fared better on this score, with operating margin ticking up to 15% of sales. But Lowe's is still posting record profitability and outperforming management's already bullish targets. "We ... delivered operating margin expansion," Ellison said, "through disciplined operational execution and cost management."

Those wins now have Lowe's executives targeting an operating margin of 12.4% for the full year, up from their prior forecast of roughly 12%. The sales picture got an even bigger upgrade and investors can now expect revenue to land at $95 billion rather than the $92 billion that the company predicted back in August. Lowe's achieved $90 billion in annual sales last year and entered 2021 expecting a step backward from that record result.

Instead, Lowe's is taking another big step toward its first $100 billion sales year. And, with operating profit set to land near $12 billion, the company has plenty of resources it can direct toward the business while still aggressively sending cash back to shareholders.

On that note, the company raised its stock buyback target and now predicts it will spend $12 billion on stock buybacks in 2021, up $3 billion from its prior forecast. Investors will have to wait until its late May report next year to find out the size of Lowe's dividend hike.

However, thanks to its surging earnings, shareholders should see another significant boost even following this year's 33% dividend hike.