The stock market has seen mixed performance for much of the past two years, and more often than not, the Nasdaq Composite (NASDAQINDEX:^IXIC) has fared better than its fellow major market benchmarks. That was once again the case on Thursday, as the Nasdaq climbed 33 points to 15,955 as of 1 p.m. ET even as some other high-profile indexes were lower on the day.

Rivian Automotive (NASDAQ:RIVN) has made headlines for posting strong gains since it went public last week, but its stock moved into the second day of a decline that has lopped off about a third of its value. Yet there was another stock listed on the Nasdaq that enjoyed huge gains on Thursday. We'll tell you about it below, but first, let's look at what's sending Rivian lower. 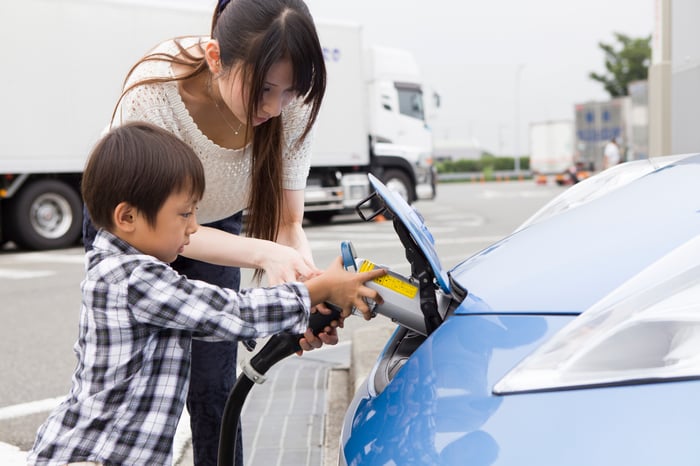 Shares of Rivian Automotive were down 17% in early afternoon trading Thursday. That still kept the electric vehicle company's market capitalization above the $100 billion mark -- topping many of the major legacy automakers around the world -- but it was nevertheless a shock to many momentum investors who paid far greater prices for their shares.

Rivian went public late last week at $78 per share, and it quickly vaulted above the $180 mark early on. Yet investors let some of the air out of the tires on Wednesday, with a 15% decline showing that some shareholders questioned whether Rivian deserved such a premium valuation so early in its existence. That negative sentiment appeared to continue on Thursday.

Early signs of demand for Rivian vehicles are highly encouraging. But in terms of a stable stock price, it's always hard for a business that doesn't yet have substantial revenue and hasn't proven its ability to deliver on commitments for production to prove to investors that it's on the right path toward success. Therefore, it'll take time for Rivian's stock to accurately reflect its long-term future business prospects. Shareholders can expect volatile moves in the interim.

Elsewhere, though, shares of Dicerna Pharmaceuticals (NASDAQ:DRNA) were the day's big winners on the Nasdaq, soaring 79%. The biopharmaceutical company got a buyout bid that was too good to pass up, and investors are celebrating their success by bidding up the share price.

Dicerna got an offer from Novo Nordisk (NYSE:NVO) under which Dicerna shareholders would receive $38.25 per share in cash as part of an acquisition of the entire company. The move in the share price took Dicerna to just over $38 per share, suggesting that investors both believe the deal will go through and that Dicerna is unlikely to get a higher bid from a second potential acquirer.

The move is just the latest in a series of acquisitions from large drugmakers seeking to beef up their pipelines. Dicerna has several candidate treatments in clinical trials, including its nedosiran treatment for patients suffering from primary hyperoxaluria, a disease that can cause severe kidney stones. Novo Nordisk is hopeful that it can close on the proposed transaction by the end of 2021.

Consolidation in many industries is a popular theme, and it's particularly common in the pharmaceutical and biotech arenas. As long as big companies look for growth, more small players like Dicerna could become acquisition targets in the months to come.