Shiba Inu's price has been falling sharply. Should you buy the dip?

Recently, though, its price has been on a downward slide. It's down around 12% over the past 24 hours, falling just over 30% over the past two weeks.

In general, it can be a smart move to buy when stock prices fall. These downturns are often good opportunities to invest more affordably and reap the rewards once prices rebound.

Does this mean that now is a good time to invest in Shiba Inu? Here's what you need to know. 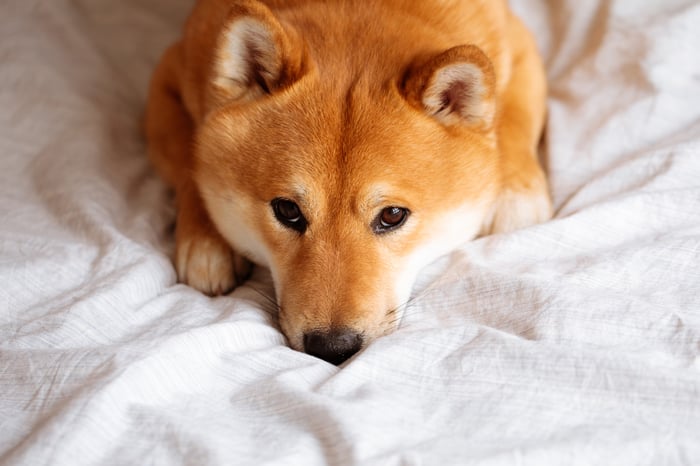 Shiba Inu: Is it time to buy the dip?

Shiba Inu has earned explosive gains recently, and those who invested early and held onto their tokens have likely made a lot of money. If you missed your opportunity to invest, the current price dip could be a tempting opportunity to buy.

Before you invest, however, it's important to understand the risks involved with this particular cryptocurrency.

Crypto, in general, is a high-risk investment because it's still speculative at this point. While some cryptocurrencies do have real-world uses, many people are still skeptical when it comes to crypto's potential. Shiba Inu, though, is even riskier because it has very little utility right now and its price increases have more to do with the hype surrounding it.

Similar to its predecessor, Dogecoin, Shiba Inu has a large community of followers who have invested heavily in the cryptocurrency in order to drive up its price. In other words, this explosive growth is not due to Shiba Inu's strength as a cryptocurrency, but rather its followers artificially inflating its price.

Once its price peaks, these investors will likely sell their tokens and move on to a different investment. This may have already begun, as Shiba Inu's price has been dropping quickly over the past couple of weeks. And because it lacks a competitive advantage in the industry, it may struggle to recover after it crashes.

Where to invest instead

Although Shiba Inu may be a tempting investment, it will most likely be a short-lived one. It's not impossible for the cryptocurrency to bounce back and experience long-term growth, but it will need to find a way to compete with major players in the crypto space.

At the moment, Shiba Inu's long-term potential doesn't look too promising. A better strategy, then, is to invest in a cryptocurrency that offers real utility and competitive advantages. These investments may not make you a millionaire overnight, but you are more likely to earn positive returns over time.

Two of the strongest players in the crypto industry include Bitcoin (BTC -4.25%) and Ethereum (ETH -5.09%). While there are no guarantees that these investments will survive over decades, they do have real advantages over trendy cryptocurrencies like Shiba Inu.

Bitcoin, for example, is by far the most popular cryptocurrency, and it's been steadily gaining traction as a form of payment among merchants. Although it's not widely adopted yet, it currently has the most potential to become mainstream someday.

Ethereum also has a unique set of advantages, as its blockchain is widely used for decentralized applications such as non-fungible tokens (NFTs) and decentralized finance (DeFi). Even if its native token, Ether, doesn't become a mainstream form of payment like Bitcoin, these applications give Ethereum a strong advantage in the crypto space.

Shiba Inu's price drop may make it an attractive investment, but it's more dangerous than it might seem. There are plenty of other options that carry less risk while still helping you earn a substantial amount of money over time.