The stock market's long-term success relies on companies' ability to prosper regardless of industry conditions. Increasingly, investors have looked to the retail sector as a key barometer of the health of the global economy, and positive market movements early Thursday morning signaled their rising optimism about the prospects for the consumer. As of 8:15 ET, Dow Jones Industrial Average (DJINDICES:^DJI) futures were up 32 points to 35,899. S&P 500 (SNPINDEX:^GSPC) futures gained 11 points to 4,698, and Nasdaq Composite (NASDAQINDEX:^IXIC) futures picked up 78 points to 16,389.

Big-box department store retailers have made many investors nervous in recent years, as their business models have seemed increasingly vulnerable to e-commerce competition. However, pent-up demand from consumers has led to a renaissance for in-store shopping experiences, and the latest results from Macy's (NYSE:M) and Kohl's (NYSE:KSS) show that brick-and-mortar retailers may yet still have at least one more day in the sun. Below, we'll look more closely at both companies and their latest reports to see what they had to say about the state of the consumer economy.

Shares of Macy's were up nearly 10% in premarket trading on Thursday morning. The venerable retail giant took steps to embrace the digital age even as it saw its core business strengthen. 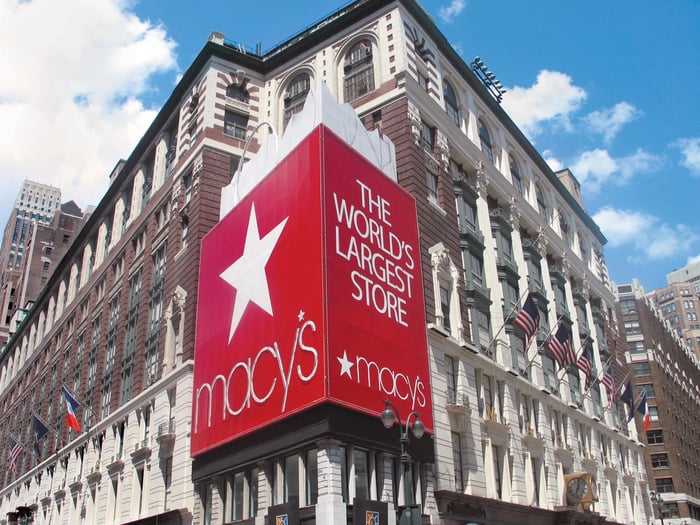 Macy's generated a lot of positive momentum during the third quarter. The company reported a 37.2% rise in comparable sales compared to year-ago levels, and even taking into account the impact of the pandemic, comps were 8.9% higher than they were two years ago. Digital sales have played a key role in those gains, rising 19% year over year and 49% since the third quarter of 2019. The digital channel now represents more than 40% of all customers shopping at Macy's, and the retailer counted 4.4 million new customers during the period.

Macy's has also taken other steps to boost its engagement. Its Star Rewards loyalty program has helped drive higher spending among members. Ample inventory has led to sustained sales even in areas that benefited during the pandemic while also leading to recoveries in those areas that took the biggest hits. Most recently, Macy's announced its plans to launch a curated digital marketplace, expanding its reach beyond its own inventory to take advantage of favorable trends in e-commerce.

As a result, Macy's boosted its earnings guidance by nearly $1 per share and foresees greater sales gains than previously expected. That's unqualified good news for Macy's, and shareholders are responding accordingly.

Kohl's shares also did well, rising 8% in Thursday's premarket session. The retailer had similar success and is also optimistic about its near-term prospects.

Kohl's rebounded in the third quarter from the tough times in the previous year. Revenue rose nearly 16% on a 14.7% rise in comparable sales. Earnings of $1.65 per share were a record high for the third quarter, and CEO Michelle Gass pointed to the efforts to position Kohl's as a key active and casual lifestyle brand have paid off and are building momentum. The launch of 200 in-store Sephora shops within Kohl's locations is "off to a great start" Gass said, and the CEO is optimistic about the company's overall strategy.

Kohl's also boosted its guidance. It now sees full-year 2021 revenue rising by percentages in the mid-20s, up from its low-20s projection previously. The new range of earnings expectations for $7.10 to $7.30 per share is $1.20 to $1.30 per share higher than its prior forecast.

Both Macy's and Kohl's are taking advantage of shopper appetites to get products they weren't able to get last year. That could give the entire retail sector a nice boost, helping the economy pick up steam heading into 2022.