The smart-home industry is just starting to emerge. For investors, it already looks like one of the best potential applications for the Internet of Things.

SmartRent just delivered its first earnings report as a public company. Before we dig into the numbers, let's take a step back and get a closer look at SmartRent. 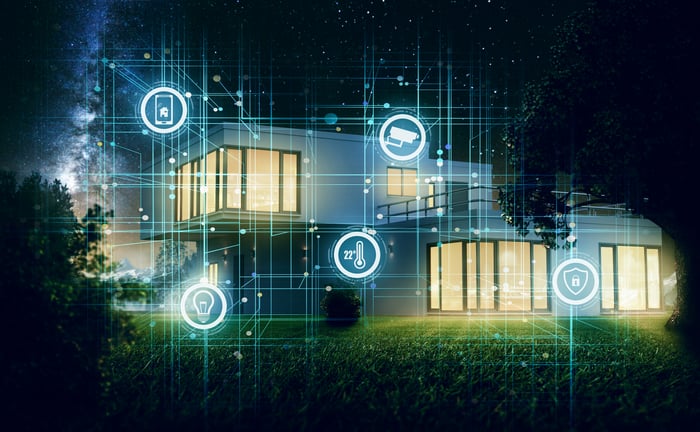 Founded in 2017, SmartRent is a smart-home tech company that serves residential landlords, homebuilders, institutional homebuyers, and others targeting the residential real estate market. Its core product is the SmartHub, a central connected device that both alerts landlords to problems in their buildings, such as a leak, and gives tenants the benefits of a smart home, including granting remote access to visitors (like a dog walker).

CEO Lucas Haldeman previously served as Chief Technology and Marketing Officer for Colony Starwood Homes, which is now part of Invitation Homes. He recognized a gap in the market, as there was no such product like the SmartHub, a brand-agnostic system that would allow landlords to only deal with one tech interface rather than several.

The SmartHub device helps make the management process much more efficient for a company managing dozens or hundreds of units. As Haldeman said in an interview with The Motley Fool, the market was "lacking an enterprise control layer," and SmartRent has found an eager customer base for its systems.

As of the end of the third quarter, the company's systems were in nearly 271,000 units, and its customers own 4.1 million units, which include 15 of the top 20 multifamily residential owners. This gives SmartRent a path to penetrate, as those operators update more of their buildings to accommodate smart-home technology.

Haldeman also noted that the U.S. has 43 million rental units, giving the company a huge market to grow into. SmartRent has started expanding into Canada and the U.K., and its hardware-agnostic product should easily adapt well to international territories.

SmartRent's revenue more than doubled in the third quarter, continuing its recent torrid growth rate. Sales jumped 112% to $35.1 million, and units deployed in the period were up by 111% to 59,437. New units booked increased 134% to nearly 50,000, a leading indicator for growth as the company books revenue once its SmartHubs are installed. Deferred Revenue also doubled to $84.7 million, and it now has more than 700,000 committed units, which represent units the company expects to add over the next two years. That indicates the company should see its installed base nearly quadruple in the next two years, just based on committed units alone.

In its guidance, management noted that supply-chain headwinds and shipping delays have led it to trim its revenue guidance from $119 million to $100 million-$105 million, implying a sequential deceleration in fourth-quarter revenue to $25 million-$30 million. Nonetheless, demand for its products remain strong.

SmartRent is putting up phenomenal growth and has a sizable market ahead of it to penetrate. Considering its growth rate, the stock also looks reasonably valued at a price-to-sales ratio of roughly 20 based on this-year's expected revenue.

However, the company is still deeply unprofitable. In the third quarter, it posted an adjusted earnings before interest, taxes, depreciation, and amortization (EBITDA) loss of $16.1 million, equal to a margin of nearly negative 50% and a free cash flow loss of $42.6 million, exceeding its revenue.

More concerning is that the company reported negative gross profit, indicating that it isn't making a GAAP profit before overhead expenses like sales and marketing, research and development, and management salaries. A $5.7 million warranty provision on deficient batteries made the gross profit worse than it would have otherwise been, though it still would have been negative. Management has said it expects to be EBITDA positive by 2022.

Over the long term, the company expects cloud-software subscriptions to drive its profits, and investors should pay attention to annual recurring revenue, which reached $8.7 million. Currently, the hosted-services segment, which represents the software subscription, is the smallest contributor to the company's revenue, behind hardware and professional services like system installations.

Overall, the company's eye-popping growth is impressive, as is the wide-open rental home market in front of it. If it can execute on its profitability goals, the stock could have a lot of room to run.