Should investors consider buying Baidu's stock, which has lost more than a fifth of its value this year, after those mixed results? Let's examine three reasons to buy Baidu -- as well as one reason to sell it -- to decide. 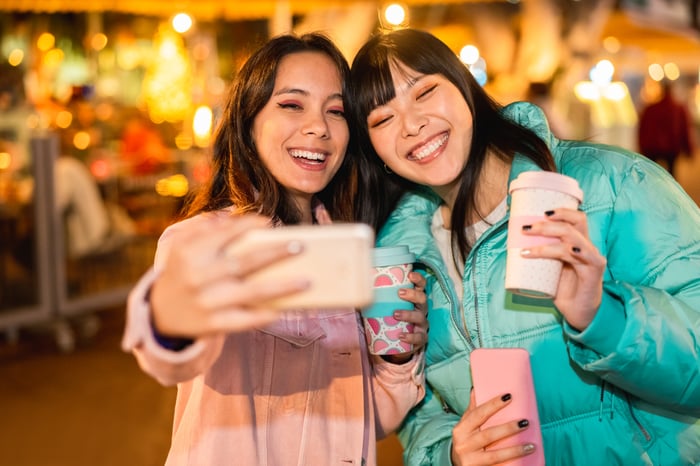 1. The online marketing business is stabilizing

Baidu generated 66% of its revenue from its online marketing business in the third quarter. The segment's revenue had previously fallen year over year for seven consecutive quarters, mainly due to macroeconomic and competitive headwinds, before returning to growth in the first quarter of 2021. That stabilization continued throughout the second and third quarters:

Baidu attributed that recovery to the growth of its managed page solutions, which enable it to handle a client's entire online presence within its ecosystem, and its marketing cloud services, which complement that platform with additional customer service and payment features.

That growth should also allay some concerns about the potential failure of Baidu's takeover bid for JOYY's (NASDAQ:YY) live streaming platform, YY Live. Baidu agreed to buy YY Live a year ago to diversify its business and gain new users, but the deal still hasn't been approved by antitrust regulators.

A growing portion of Baidu's "others" revenue, which accounted for the remaining 34% of its revenue in the third quarter, came from its AI Cloud business. The segment's year-over-year growth has accelerated significantly over the past two quarters:

Baidu only controlled 7.8% of China's cloud infrastructure market in the second quarter of 2021, according to Canalys, putting it in a distant fourth place behind Alibaba (NYSE:BABA), Huawei, and Tencent.

Nonetheless, the platform's ongoing expansion -- which is supported by the growth of Baidu's marketing cloud services, the Smart Mini Programs within its mobile app, its DuerOS virtual assistant, and its Apollo platform for driverless cars -- indicates it won't be rendered obsolete anytime soon.

3. Its price-to-sales ratio is low

Baidu expects its revenue to rise 14%-17% for the full year, and the stock trades at just three times the midpoint of that forecast.

By comparison, Tencent and Alibaba, which have also recently been weighed down by the macro and regulatory headwinds in the Chinese tech sector, trade at seven times and three times this year's sales, respectively.

Next year, analysts expect Baidu's revenue to grow another 15% as its online marketing and cloud businesses continue to expand. That low price-to-sales ratio and stable growth rate might limit its downside potential.

The one reason to sell Baidu: its margins

Baidu's revenue growth is stabilizing, but it's increasingly relying on lower-margin businesses to generate fresh sales.

Baidu AI Cloud isn't profitable yet, while iQiyi (NASDAQ:IQ) -- the streaming video platform that is also included in its "others" segment -- continues to struggle with sluggish growth and ugly losses. Its investments in newer services -- including virtual assistants, driverless cars, and other apps -- further squeezes its margins without generating meaningful revenue.

Baidu's investment in Kuaishou, a Tencent-backed short video app, also backfired and contributed heavily to its big GAAP loss during the third quarter.

All those challenges have been squeezing its operating and adjusted earnings before interest, taxes, depreciation, and amortization (EBITDA) margins over the past year:

Analysts expect Baidu's GAAP net income to rise 32% this year against an easy comparison to the pandemic. But next year, they anticipate a 43% decline as its margins continue to contract.

Therefore, Baidu's stock might initially seem cheap at 12 times this year's earnings, but it looks a lot less attractive at 22 times next year's earnings.

Should you buy Baidu's stock?

Baidu's business is stabilizing, but it still faces too many headwinds. Investors who can look past the near-term regulatory threats would be better off investing in Tencent or Alibaba -- which both own more dominant platforms and rely less on lower-margin businesses -- than Baidu.