Nvidia (NASDAQ:NVDA) hit another one out of the park on its fiscal 2022 third-quarter update for the three months ended Oct. 31, 2021. Total revenue of $7.1 billion in the quarter represented a 50% year-over-year increase, and operating income of $2.7 billion (that's right, a nearly-40% operating profit margin) was up 91% year over year.

The company's success in recent years is thanks in large part to a massive video game upgrade cycle as gamers adopt Nvidia's latest RTX 30 series GPUs (graphics processing units). Advanced Micro Devices (NASDAQ:AMD), which has long played second fiddle to Nvidia in the GPU space, has been making hay as well, and rival Intel (NASDAQ:INTC) wants in on the party too and is releasing a stand-alone gaming GPU early in 2022.

Intel might be able to capture a slice of the GPU gaming market, though I would be shocked if anyone dethrones Nvidia anytime soon on this front. However, it's the massive data center industry that still makes Nvidia a great buy for the long haul right now. 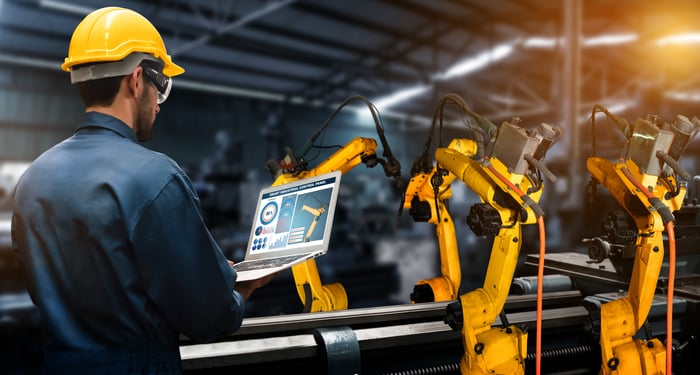 GPUs march into the computing unit of the cloud

Of the $7.1 billion haul Nvidia took in in Q3, just over $2.9 billion of the revenue came from data centers, up 55% from a year ago and up 24% from the last quarter. These are big numbers, but the gaming segment was still Nvidia's largest revenue line item at $3.2 billion (a 42% year-over-year increase).

While video games remain Nvidia's bread and butter and will continue to grow over time, data centers are still a massive opportunity. Intel, by far the largest chip company by annual revenue, illustrates it best. Its Data Center Group alone made $6.5 billion in sales in Q3. With cloud and new high-performance computing use cases ramping up, the data center industry isn't going to get smaller anytime soon.

And that's where the investment thesis for Nvidia still makes sense. GPUs are still early on in implementation in data centers. Central processing units (CPUs), Intel's historical forte, are still necessary in the modern data center computing unit. But complex workloads like AI are better handled by the hardware Nvidia specializes in. Plus, while Intel is taking a shot at Nvidia's gaming business with its new GPU design, Nvidia's own disruption of Intel's data center turf is already underway with a new lineup of data processing units (DPUs) that handle the flow of information) and upcoming CPUs (for general-purpose workloads).

Nvidia's growing suite of hardware is the real deal, but software is what often differentiates the company from its semiconductor peers. You see, Nvidia has long been billing itself as an integrated company that not only designs chips, but also puts together extensive software kits to make using its hardware even easier. As CEO Jensen Huang said on the Q3 earnings call, "chips are enablers, they don't create markets; software creates markets." Basically, hardware is designed to enable a use case that has already been imagined as a software service.

Two recent product launches highlight the massive long-term potential of software for this chip company. First, Nvidia AI Enterprise, a software suite of AI and analytics tools for use on VMware's vSphere cloud computing platform. As more firms try to get started implementing AI in their operations, AI Enterprise could become a lucrative business line for Nvidia.

Second, the "metaverse," that virtual embodiment of the digital world that Meta Platforms (formerly Facebook) recently shined a light on. Nvidia's Omniverse actually came before Facebook's headline-grabbing rebrand, and its potential is massive -- and could be realized sooner than you think. Huang discussed how Nvidia thinks of companies and the work done with them as individual "worlds." For example, a designer using Adobe software is working in the Adobe "world," but that designer might work at an automaker -- like say BMW, which has its own "world" of data, content, and work.

Omniverse was designed to be a connector of these disparate digital worlds to help unify the "metaverse" into one big collective space. Think of it like a digital collaboration tool, as well as a way to create a digital twin of real-world locations that can be optimized and worked on virtually. Omniverse was recently made available to nearly 3 million developers. Just one tool within this suite, Omniverse Avatar, is being used by over 70,000 creators already.

Licensed out at about $1,000 per year per user, Omniverse Avatar alone could be a big deal. Any software-based bot -- like a virtual assistant in a car, a restaurant ordering system or retail checkout kiosk, or an online customer service video bot -- can get its own virtual avatar. Huang and company foresee millions of these virtual assistants being a possibility one day soon. Suffice to say Omniverse has vast income-earning potential for Nvidia.

All of these cloud capabilities are of course powered by a data center, and Nvidia GPUs and related hardware are making it happen. The company foresees revenue growing another 48% year-over-year in Q4, but it's this ultra long-term data center and cloud computing potential that still make the stock a buy right now.