T-Mobile (NASDAQ:TMUS) recently passed 200 million people covered by its Ultra Capacity 5G network. That milestone puts it ahead of its own schedule to cover 200 million people by year-end, and well ahead of AT&T (NYSE:T) or Verizon (NYSE:VZ). In fact, the competitors are falling further and further behind as they face technical complications preventing them from deploying certain airwaves.

But 200 million is just the tip of the iceberg for T-Mobile. The real impact of its 5G lead won't show up for a few years as it builds its network coverage from 200 million to 300 million-plus. That's when investors will see the impact on net additions. 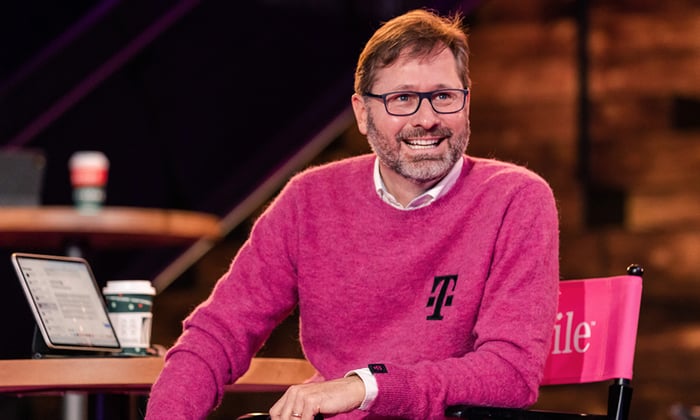 Getting network coverage from zero to 200 million people is far easier than getting from 200 million to 300 million. The next 100 million are spread out in rural markets containing about five times as much land area than the major metro markets that contain two-thirds of the population.

But T-Mobile expects to cover those markets by the end of 2023. If its early progress in deploying spectrum and improving its network is any indication, it could very well arrive at the milestone even earlier.

Meanwhile, AT&T and Verizon only plan to cover 175 million to 200 million people with their comparable 5G networks by the end of 2023. And those plans could be pushed back further as they work with regulators to resolve a conflict with using their newly acquired C-Band spectrum without interrupting aviation radio signals.

In other words, they're more than two years behind T-Mobile. That's approximately one phone-upgrade cycle for many consumers, giving T-Mobile a big opportunity to win over rural customers.

Rural markets are an area in which T-Mobile has historically lagged the competition. While it's won significant market share in dense metro areas, its network coverage and brand reputation outside of those markets has struggled. The next couple of years could be pivotal in T-Mobile's ability to win customers in those markets.

Furthermore, a two-year lead in network coverage could be instrumental in winning over enterprise customers, another area in which T-Mobile has historically lost to the competition. But if a business has employees deployed all over the country, going from city to city perhaps, a carrier with full coverage across the country is indispensable.

Getting into the markets

It's one thing to have better coverage than the competitors; it's another to actually win over customers. To that end, T-Mobile has committed to opening hundreds of retail stores in rural markets over the next few years. That said, storefronts in rural markets are going to be far less efficient than the doors T-Mobile owns in denser markets.

T-Mobile is also partnering with existing retailers. It struck deals with Walmart in September and Best Buy in October. The Walmart deal, in particular, gives it an instant presence in more rural markets, efficiently expanding its footprint. T-Mobile says the two deals combined with the rest of its retail expansion efforts more than quadrupled its retail presence this year.

T-Mobile also plans to grow its presence in rural markets through direct marketing, and a key piece of that marketing will be its in-home internet service. Many rural markets have zero or one option for high-speed internet. T-Mobile will use excess 5G-network capacity to offer its in-home service, which should be competitive with most local offerings on both speed and price.

Over the next few years, T-Mobile's share of rural markets should get a significant boost as it takes a big lead in network coverage. That should translate into strong net subscriber additions over the next two years, maintaining the momentum it's built over the last half-decade. There's still a lot left in T-Mobile's growth story.