GrowGeneration (NASDAQ:GRWG) sent mixed signals to investors when it reported its Q3 earnings on Nov. 11. While it beat estimates on revenue, an earnings miss and a lowered outlook have left the company's stock price stuck within a certain price range ever since.

Nonetheless, the nation's largest specialty hydroponic and organic garden center supplier has developed a reputation as a leading supplier in the fast-growing cannabis industry. Even though the latest report brought some disappointments, this retail stock still has the potential to benefit from its cannabis association and generate additional growth for investors for three reasons. 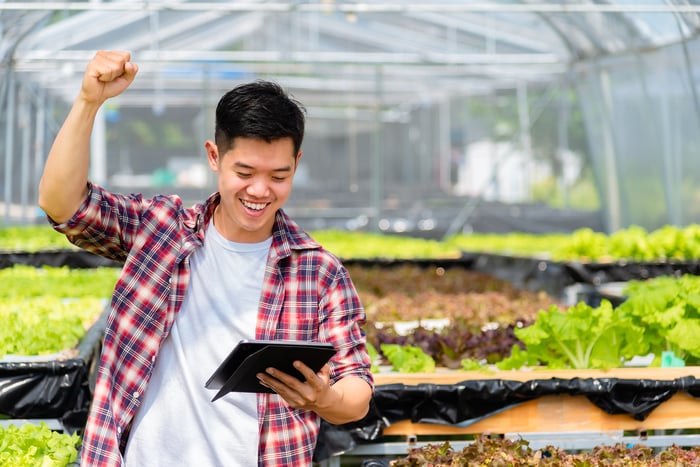 1. There is rapid expansion potential despite supply shortages

GrowGeneration supplies both amateur and professional growers in the hydroponics industry. This target market suggests that the company has many similarities to that of Tractor Supply (NASDAQ:TSCO), a retailer with almost 2,000 stores in 49 states that supplies amateur and professional farmers. Like Tractor Supply, GrowGeneration locations are 15,000-square-foot stores on average.

This points to the potential of GrowGeneration, which operates just 62 locations total between California and Maine. On its third-quarter 2021 earnings call, management reiterated its desire to have GrowGeneration stores operating in every U.S. state eventually.

Also, management restated its goal of operating 100 locations by 2023. This year, supply shortages and a cannabis glut on the West Coast have slowed store build-outs. Still, the company expects to move past these challenges by the second half of 2022.

Moreover, GrowGeneration's proprietary products continue to sell well. One of its in-house brands, Power Si, sells in Canada and Europe. Moreover, these specialty items make up 9% of its revenue today. By 2023, GrowGeneration expects these goods to account for 25% of sales, pointing to a rapid pace of expansion.

Investors should also appreciate that GrowGeneration produces profits. Many early-stage companies, even in retail, often report losses for years before finally turning profitable. Consequently, its price-to-earnings ratio is just under 75. While this is well below the 800 earnings multiple it was sporting early in the year, it remains significantly above Tractor Supply's multiple of almost 30. Much of the reason for the drop is associated with the stock price falling nearly 70% from its February peak.

GrowGeneration's costs did cut into potential higher profits that could have lowered the P/E ratio. The company spent $36 million on store operations in the first nine months of 2021, nearly triple the spending for the same period in 2020. Depreciation and amortization costs rose almost sevenfold over the same time frame to $8.5 million. Additional stores and pre-opening expenses contributed heavily to both increases.

Additionally, these costs did not affect the price-to-sales (P/S) ratio, which came in just above 3. While well above Tractor Supply's sales multiple of 2, it still makes GrowGeneration appear significantly less expensive. Investors should also remember this P/S multiple has come down from the 15 multiple it reached in February.

The recent comparable-store sales (or comps) could also point to underlying strength. In the third quarter, the company reported a 16% increase year over year. While this slightly beat Tractor Supply's comps growth of 13%, it fell considerably from its 60% comps growth reported in the second quarter.

This news might understandably alarm investors due to the aforementioned oversupply issues on the West Coast. But stockholders should also realize that the store count doubled from 31 to 62 over the last year, and comps include only stores opened at least a year. Hence, the company calculated that metric with only 25 stores, 10 of which are in California, Nevada, Oregon, and Washington. This indicates that the comps number should improve as the company can include more stores less influenced by the West Coast supply glut.

An oversupply of cannabis on the West Coast and an undersupply of key materials have undoubtedly slowed GrowGeneration. Nonetheless, the company continues to expand at a rapid pace, and the massive drop in the stock price has brought it to a reasonable valuation. When more investors begin to notice the growth, they may look back upon this time as a buying opportunity.