New investors may not see $2,000 as a huge investment portfolio. However, venture capitalist and PayPal Holdings co-founder Peter Thiel's $2,000 investment in PayPal in 1999 within a Roth IRA left him with a multi-billion holding in his tax-free retirement account, according to ProPublica. 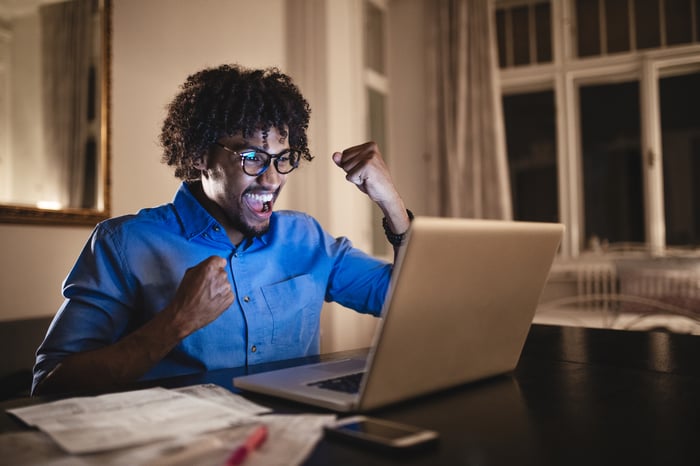 Latch redefines building security through software as a service (SaaS). It combines software, devices, and services into a "full-building operating system" that offers a new approach to building security for owners, residents, couriers, and visitors. Through its subscription-based system, people can access a building or specified area through a smartphone, card, or code.

The company serves apartments, commercial office spaces, and life science real estate. More than 3 in 10 new apartments in the U.S. have contracted with Latch, though only about 1 in 10 of these new apartment buildings currently use the system. This means that once the buildings are operational, subscription revenue should surge.

Revenue has already begun to rise rapidly. For the first nine months of 2021, Latch reported revenue of $27 million, a 154% increase compared with the same period in 2020. Still, with the cost of revenue and expenses each rising by just over 100% during that period the net was a loss of $112 million, according to generally accepted accounting principles (GAAP). These results from the first three quarters of 2021 meant losses rose 140% compared with the first nine months of 2020.

However, total bookings for the third quarter alone came in at $96 million. Also, cumulative bookings are up 700% in the last two years, indicating that the massive revenue increases should continue once the new facilities open for business and bookings turn into subscription revenue.

Despite these increases, the stock has fallen by over 20% from the June initial public offering. The up to 24 months lag time between bookings and the time where device and subscription revenue start to accrue may have frustrated some investors. Also, the 37 price-to-sales (P/S) ratio seems to price this company for perfection. With massive booking growth pointing to a bright future, Latch could turn into a long-term winner.

OppFi offers securitized loans through SalaryTap, which draws loan payments from a paycheck and charges an annual percentage rate (APR) between 24.9% and 29.9%. Although, its standard loan product carries a 160% APR. While that may seem outrageous, it comes in lower than payday lenders. OppFi also fully discloses its fees and offers resources to help customers improve their finances, likely leading to its 85 net promoter score, a high level of customer satisfaction that compares well with Upstart.

Even with these results, shares have fallen by almost 40% since OppFi went public on July 21 through a special purpose acquisition company. Nonetheless, the company projects between $62 million and $66 million in adjusted net income in 2021. This would place its 2021 P/E ratio at around 11, which appears to make this stock an underappreciated bargain.

As users return to more offline activities, Pinterest appears to have struggled. The Q3 2021 monthly active user (MAU) base of 444 million was down 7% from the 478 million MAUs in the first quarter. Seeing these numbers, some investors may consider declining user growth a red flag for Pinterest.

Aside from that news, Pinterest's unique value proposition remains intact. Instead of relying on demographic profiles like the sites of Meta Platforms, Pinterest focuses on stoking imagination to reach users as individuals. By seeing what a user pins, the company can place promoted pins that help pinners find what they want while linking companies to unique audiences that other sites might overlook.

Even with the disappointing MAU numbers, revenue for the first nine months of 2021 came in at just over $1.7 billion, surging 75% compared with the same period in 2020. Pinterest accomplished this despite falling MAUs because the average revenue per user (ARPU) came in at $1.41 in Q3, 44% higher than 12 months ago. Moreover, the company reported a U.S. ARPU of $5.55 versus $0.38 internationally. Since only about 20% of its users are in the U.S., this points to tremendous ARPU growth potential.

Additionally, the company is now profitable. In the first three quarters of 2021, Pinterest reported a net income of $142 million versus a loss of $336 million during the same period in 2020. Limiting expense growth to only 19% helped Pinterest turn a profit.

Regardless of the positives, investors have soured on the stock as it has fallen by about 45% since its February peak due largely to sluggish MAU growth. Still, Pinterest now sells for just 13 times sales, down from more than 30 early in the year. With a lower multiple and strong ARPU growth, the stock price could potentially rise even if MAU numbers do not.