Even after slipping on Wednesday and Thursday, share prices of Rivian Automotive (NASDAQ:RIVN) and Lucid Group (NASDAQ:LCID) are up big over the last week as investors cheer newcomers to the electric vehicle (EV) scene.Both companies are bursting with potential but are a long way from profitability.

If you feel like you missed out on Lucid and Rivian, or are simply looking for a better value in the EV sector, then Ford (NYSE:F)and Nio (NYSE:NIO) could be better options right now. 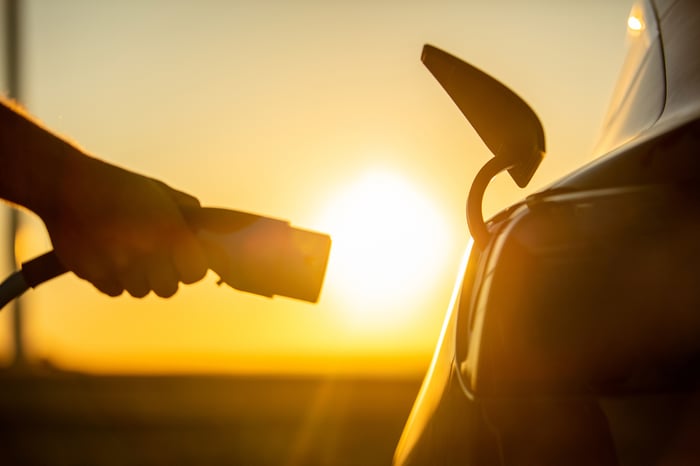 Daniel Foelber (Ford): 10 years ago, Tesla (NASDAQ:TSLA) was a new, unproven, and heavily criticized EV company. Legacy automakers doubted the feasibility of EVs and continued with their established businesses. Today, the script has flipped as new and existing automakers clamor for a slice of the ever-growing EV pie.

It takes humility to admit that you were wrong. And no legacy automaker is doing it better than Ford. Although Ford is a well-known brand, many folks aren't aware of the extent of its EV investments. Investors can use this misconception to their advantage as Ford is valued like a low growth legacy automaker when in reality its growth is set to accelerate thanks to EVs. Ford plans on spending $40 billion to $45 billion on strategic capital expenditures between 2020 and 2025 -- $30 billion of which is earmarked for battery EVs. However, it's worth mentioning that as EVs grow to comprise a larger share of Ford's sales mix, there should be a decline in sales from its legacy models over time. The challenge for Ford will be growing profits off of a larger EV mix, whether that's from higher margins from the vehicles themselves or software and other streams.

Investors may be wondering why Ford is diving headfirst into EVs after years of resistance. The simplest answer is motive, as well as CEO Jim Farley who took over in October 2020.

Business decisions are based on incentives. While companies like Tesla have spent the last decade growing, Ford has languished due to fierce competition and unsuccessful expansions into the sedan market. Without its core F-Series pickup line, it would likely have been toast. However, Ford is quickly becoming one of the biggest supporters of EVs. Similar to oil and gas, where the struggling companies like BP and Royal Dutch Shell are quick to embrace renewables while the more successful ones like ExxonMobil and Chevron are slow to change, Ford is the ideal car company to embrace EVs. It's investing in EVs at a faster rate than Toyota, Honda, Mercedes-Benz, and other internal combustion engine (ICE) automakers because, quite frankly, Ford is arguably not as good as those companies in the ICE field.

Incentivized to avoid sinking, Ford is swimming toward EVs on the back of its F-150 Lightning and Mustang Mach-E. With the electric truck and SUV market still relatively young, Ford is poised to become a contender and maybe even a leader in both classes.

Next leg of growth

Howard Smith (Nio): Many investors thought they missed out on Chinese EV maker Nio in the early months of 2021 after the stock shot up to more than $60 per share, giving the company a market cap close to $100 billion. The frenzy came as people thought they needed to get into the next big EV stock. That scenario is starting to look familiar again as Rivian and Lucid garner much investor adoration and shares have soared.

But Nio shares were subsequently cut in half, even though its business continued to drive ahead. The stock has recovered some, but it still has a lower valuation than both Rivian and Lucid currently. And with it already moving its business into Europe and working on doubling its production capacity, Nio could be the EV stock to buy for those that feel they've missed out on the recent run from those two U.S. start-ups.

By the time Nio reports its next vehicle delivery data, it will likely have sold more than 150,000 of its electric SUVs. And while investor excitement around Rivian and Lucid is understandable, it shouldn't be lost that neither has produced any meaningful volume as of yet.

While Nio has hit some recent bumps from supply chain disruptions, it continues to push forward on its next leg of growth. It sent its first export shipment to Norway this summer and is working to grow its community there. That consists of Nio House studios used by its customer communities, and its network of charging solutions which includes its unique battery swap stations that also help bring the company a stream of subscription revenue. Nio expects to sell its newest offering, the luxury ET7 sedan, into both Norway and Germany in 2022 as it expands to its next European market. This expansion comes as the company and its manufacturing partner are constructing new lines to more than double capacity as demand continues to grow. For those that missed out on the recent run in shares of Rivian or Lucid, Nio makes a good alternative EV investment right now.

Companies that are built to last

If you're tired of hearing about growth stocks like Rivian and Lucid, Ford and Nio could be good electric car options now. Both companies are established businesses generating real sales and ramping production. Ford's established and profitable business gives it the stability and extra cash needed to fund its EV exploits. Nio is a market leader in China and is growing at a breakneck pace. When valuations stray from fundamentals, sometimes it's best to ignore the limelight in search of hidden gems like Ford and Nio.