The connected fitness company is diluting its stock, but Wall Street seems delighted.

Connected exercise equipment company Peloton Interactive (PTON 8.69%) saw its shares soar by about 13% within hours of announcing a $1 billion secondary stock offering on Tuesday morning. The company's share price was taking a beating for weeks following disappointing fiscal first-quarter results, along with management alarmingly reducing guidance. Therefore, the stock's massive rally may look puzzling at first glance. After all, the company just announced it would dilute its shareholders while signaling its need for more cash than what its sales are providing. However, there is indeed a bullish undercurrent that the stock market correctly identified.

There are still plenty of warning signs around Peloton

Regardless of the stock market's excitement over Peloton's equity offering, risks remain high for the online workout provider, and it will still need to take strong steps to secure a turnaround. In its fiscal 2022 first quarter, which ended Sept. 30, top-line growth was positive, driven by an increase in its overall subscriptions. However, the use of its app fell dramatically, and in its updated guidance, it slashed all of its most important previous estimates for fiscal 2022. It also continued generating net losses, and management anticipates even bigger bottom-line losses ahead. 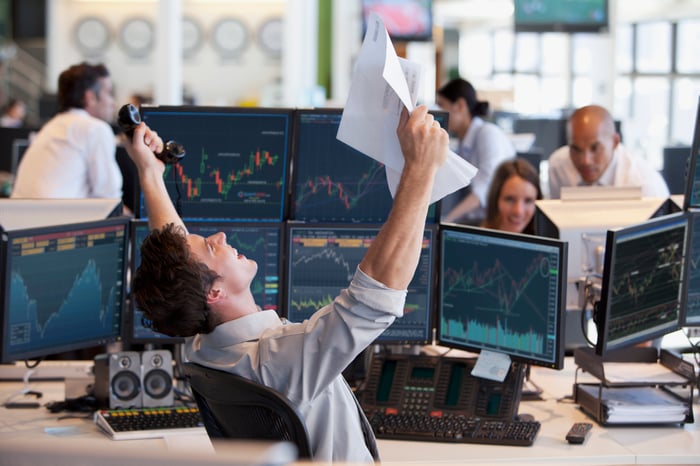 The so-called "great reopening", when the period of COVID-19 lockdowns and enforced business shutdowns largely ended, switched Peloton over from its pandemic-driven upward trajectory to a declining one. Large gym operators have reported that clients are returning to physical gyms in numbers approaching those seen in 2019 before the coronavirus arrived in the U.S.

In another recent development, Peloton launched wide-ranging lawsuits against two of its competitors on Monday. First, it's suing NordicTrack maker iFIT for patent infringement, in part based on U.S. Patent No. 11,170,886, which it was just granted on Nov. 12. That patent is for "proprietary systems, which interconnect Peloton's bikes and treads, enabling users to participate with other Peloton users in live and on-demand exercise classes."

The lawsuit alleges that iFit "attempted to free-ride off Peloton's innovative technology" through the use of its own leaderboard technology, involved in-home streaming and online live workouts, which it uses in at least 55 products. Peloton is also suing Echelon for using a "copycat leaderboard" for its bikes, treadmills, and rowing machines. Some commentators claim this is also a sign of desperation on Peloton's part, though it is also true that the company has long been highly litigious, even during 2020 when it was riding high.

Why is the stock sale so popular with investors?

Peloton's assorted troubles sent its stock value sliding from around $114 per share in early September to around $86 in early November, right before its fiscal Q1 earnings report. That report triggered a further plunge, with share prices bottoming out at approximately $47, on Monday.

However, Tuesday's announcement of the planned sale of roughly 23.91 million shares gave the stock a boost. They will sell at $46 per share, and the offering is expected to bring in around $1.07 billion to be used for "general corporate purposes." The offering includes an optional 3.21 million additional shares that underwriters can purchase, and is scheduled to close Thursday. Wall Street responded by bidding up Peloton's shares 13% by noon on Tuesday. They closed that trading day up by 15.5%, though a slight downward move occurred after hours.

Given that the secondary offering equates to about 8% of Peloton's total market cap at the time of the announcement, the sale will meaningfully dilute current stockholders. There are several reasons why Wall Street's positive response to the news wasn't off base, however.

One possible factor was described by Baird analyst Jonathan Komp, who now predicts that the stock is unlikely to fall below a floor of $50  a share. He expects improvements over the coming quarters. In addition, he believes the stock offering will restore investor interest by freeing Peloton from "a significant near-term overhang," according to his research note, which also described the workout enterprise as a "Fresh Pick."

An even bigger factor in the optimistic response, though, could be the vote of confidence from major investors that this stock offering represents. According to Peloton's news release, those who will be buying the newly minted shares include "entities affiliated with Durable Capital Partners LP and TCV, [...] and funds and accounts advised by T. Rowe Price Associates, Inc." In short, major institutional investment firms and their clients believe a large investment in Peloton is worthwhile, and are putting money behind that belief.

Large firms with reputations to protect -- as well as in-depth analysis and high-quality information gathering -- have enough faith in Peloton's future to buy up more than $1 billion worth of new shares. This is a remarkably powerful endorsement, and likely helps explain Wall Street's bullish sentiment.

While the company is still clearly struggling with the headwinds generated by the resurgence of physical gyms and a possible waning of interest in at-home connected exercise platforms, in the wake of this stock sale, Peloton looks like it's at least neutral again, and worth watching. It might even be a buy -- albeit a risky one -- among gym stocks.