ThredUp (NASDAQ:TDUP) may be the most disruptive company in the resale sector thanks to its resale-as-a-service business. This entails operating the clothing resale component for large clothing brands like H&M and Madewell.

In this episode of Upgrade or Topgrade recorded on Nov. 12, Millionacres editor Deidre Woollard and Fool contributors Jeremy Bowman and Nicholas Rossolillo discuss how ThredUp is differentiating itself in a unique corner of the apparel market. 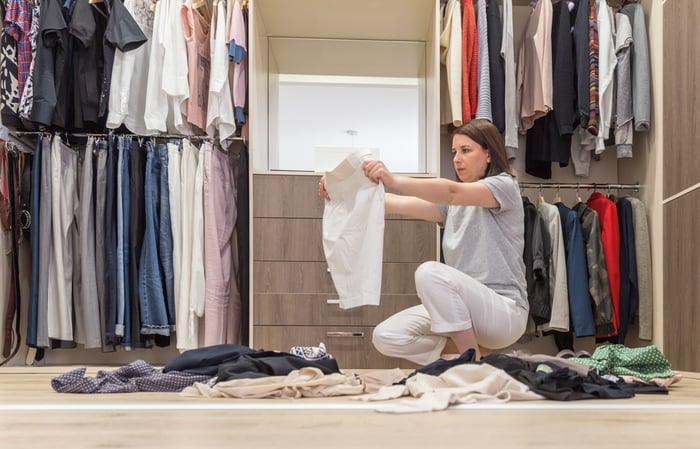 Deidre Woollard: Let's talk about ThredUp. I started this hour with the idea that I wanted to go into the RealReal, and then when I started studying ThredUp, the more I started looking at this company, the more excited I got about it because they're doing something that I think is so smart, which is this resale as a service thing. They had some pretty strong revenue numbers. Now, they're relatively new to the market. They're currently still hovering around their IPO price, but year-to-date, they're up about 25 percent. But their numbers are going up dramatically. They're still pretty small. Total revenue was $63.3 million, up 35 percent year-over-year. Gross profit was $46 million, up 41 percent year-over-year. Net loss of 14.7 million, active buyers of 1.4 million. That's where you see the difference in the prices and how it all shakes out because with The RealReal, you have fewer buyers and sellers, but you have much bigger high ticket items. ThredUp is definitely not that.

Jeremy Bowman: I think I saw that 71 percent of their sales are for items or $20 or less, which makes me think that it's probably hard for them to make money on some of them.

Deidre Woollard: Yeah, I think that's one of the things that if I had to pick a downside for them, that's one of the things that does worry me and they keep trying to cut their prices more to compete. It's great you can buy things really cheap on there, but it does make it hard to make money. Eighty percent repeat buyers, you really see that circular effect going on with ThredUp. 77 percent of their Cleanout kits, which is where they send you a bag and you basically stuff it and send it back is from repeat sellers. Going into that resale-as-a-service, the thing that makes me most excited about them is their brand partnerships. They partnered with Madewell, they partnered with Farfetch. They just announced deals with Adidas, Crocs, and Michael Stars. I feel there's so much potential and there's a couple of private companies that are also doing this white-label resale-as-a-service. But I feel the potential here is massive. I know H&M has started to think about it a bit. All of the fast fashion stores and really fashion in general is starting to have to address this clothing issue and trying to figure out how to accept clothing back, how to offer discounts, all of that stuff and it's a hard business to get into. I think that's where the thredUp really has an advantage.

Jeremy Bowman: I agree. I think when you think of the environmental angle with this doing this for other company. It's resale-as-a-service as you say is where you can really build scale and make an impact and like you said, H&M you may have seen signs there and other stores. But companies want to present themselves as environmentally friendly to customers. Operationally this is difficult to do so you can have thredUp handle some of that infrastructure for you, and then H&M or Madewell, whoever your partner is, so that does the customer-facing part. I think that could be a pretty good opportunity for them.

Nicholas Rossolillo: Yeah, it is an interesting model. When I saw that, I immediately thought of the TJX Companies and Ross. They've made a fantastic living off of doing that, partnering with brands but they've had very limited success online. This almost looks like the model for doing that in an e-commerce format to me. That is like Jeremy mentioned earlier, lower-value items, maybe you're giving up some profit long term, but the volume can definitely be there because these are every day pieces of clothing and accessories.