Cardiff Oncology is a prime takeover target heading into 2022.

The pharmaceutical industry appears poised for a record-breaking level of merger and acquisition (M&A) activity in 2022. Four emerging trends back up this assertion.

First, Pfizer (PFE -0.55%) and Moderna are both flush with cash thanks to their novel coronavirus vaccines. Second, Novartis recently banked $21 billion after selling its two decade long position in Roche. Third, Amgen, AstraZeneca, Biogen, Bristol Myers Squibb, Gilead Sciences, Johnson & Johnson, Merck, Moderna, Pfizer, and Sanofi are all expected to pursue bolt-on acquisitions next year to flesh out their clinical pipelines and product portfolios. Fourth, Novo Nordisk and Roche can both be counted on for at least one small to mid-sized acquisition per year.

Which segment of the pharmaceutical space will see the most business development activity in 2022? If history is any guide, promising early stage cancer companies will continue to be a particularly hot area for M&A next year. Cardiff Oncology (CRDF 0.57%), for instance, is a small-cap cancer company that comes across as uber-attractive takeover target. Here's a look at upside potential and downside risk associated with this promising biotech stock. 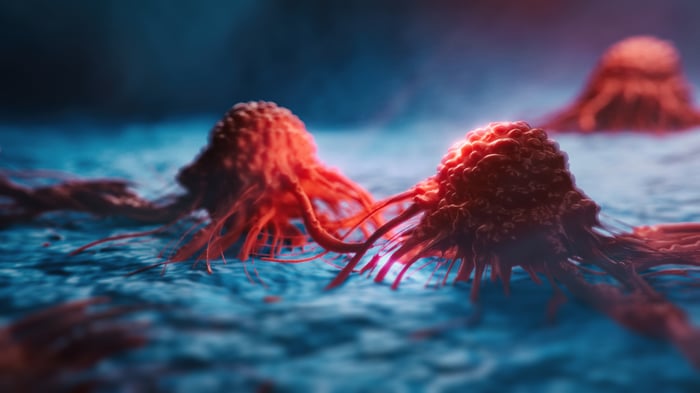 A look at Cardiff's upside potential and downside risk

Cardiff Oncology is a tiny developmental stage cancer company at this point in its life cycle. The star of the show for the company is its Polo-like Kinase 1 (PLK1) inhibitor ovansertib.

PLK1 inhibition has shown promise in the clinic before with other molecules, but the toxicity of these earlier generation drugs kept them from hitting the market. Ovansertib, for its part, has so far shown a high degree of on-target specificity and low levels of toxicity in early stage trials.

The drug is presently in a basket of early to-mid stage trials for advanced forms of colorectal, pancreatic, and prostate cancer. Its lead indication is KRAS-mutated metastatic colorectal cancer, which is on track to yield top line data in May of 2022, according to clinicaltrials.gov.

Why is Cardiff on buyout watch heading into this all-important data reveal? Last week, the company announced that Pfizer bought a $15 million equity stake in the company, and agreed to appoint one of its key executives to Cardiff's Scientific Advisory Board, once formed.

What's noteworthy about this partnership is that it appears to be a nearly identical repeat of Pfizer's initial interest in Trillium Therapeutics last year. Specifically, Pfizer first took a $25 million equity stake in Trillum and helped the drugmaker form a Scientific Advisory Board. Eleven months later, Pfizer decided to buy Trillium for approximately $2.2 billion. Early shareholders in the clinical-stage biotech thus walked away with gains in excess of 4,800% in roughly two years' time, although the bulk of these gains occurred before Pfizer entered the picture. 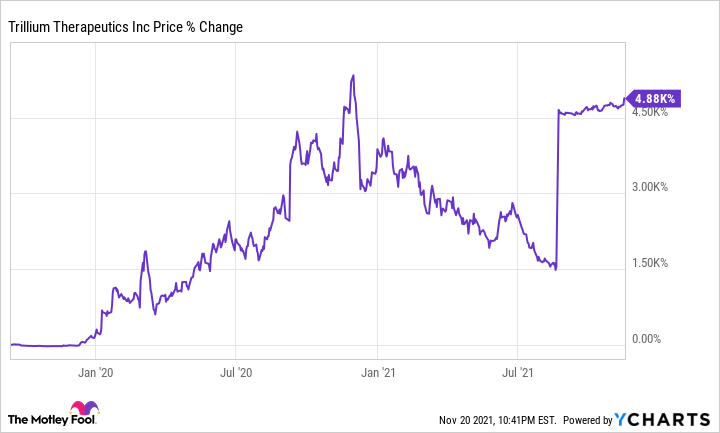 Now, Cardiff isn't guaranteed to fetch a tender offer from its newfound partner. But if ovansertib hits the mark in advanced colorectal cancer next May, Pfizer probably won't hesitate to call the exact same play for Cardiff. Underscoring this point, Pfizer also worked the right of first access to the company's clinical data into this deal. That's a strong sign that this smallish equity investment may turn out to be a prelude to a formal buyout offer down the road.

So, if all the stars align, Cardiff's stock might be gearing up for a Trillium-like run over the next six months.

The main downside risk here is that early stage cancer assets fail more often than not. And Pfizer is in no way obligated to stick around if ovansertib flops. In turn, a clinical setback for ovansertib would almost certainly wreck havoc on its share price. Driving this point home, this singular drug candidate is essentially the company's entire value proposition at this stage of the game.