Alex Carchidi and Rich Duprey
(TMFacarchidi)
Author Bio
Alex began writing for the Fool in early 2020 and follows companies in the healthcare sector. Formerly a researcher in the biotech industry, he leverages his science background in his work as a writer and entrepreneur. His interests include exploring his hometown of Boston, traveling in Latin America, and value investing.
Follow @alexcarchidi

While both Compass Pathways (NASDAQ:CMPS) and Jazz Pharmaceuticals (NASDAQ:JAZZ) are biopharma companies, their positioning couldn't be more different. Whereas Jazz has a market cap of $8.33 billion, $2.86 billion in trailing revenue, and a pipeline that's chock-full of drug programs of all sorts, Compass is worth $1.48 billion, and it only has a few projects in the works, none of which are near completion.

For investors with little expertise in pharma, it can be tough to weigh the merits of innovative companies like this pair. So let's consider one argument in favor of each stock to see whether Compass Pathways or Jazz Pharmaceuticals might be an appealing addition to your holdings. 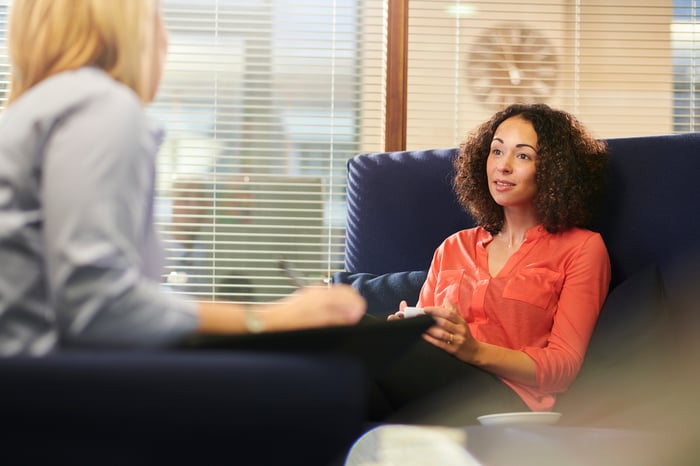 This company might disrupt the treatment paradigm for depression

Alex Carchidi (Compass Pathways): Compass Pathways is a biotech that's investigating whether its special combination of psilocybin and psychological support is effective at treating severe mental illnesses like post traumatic stress disorder and treatment-resistant depression. While it doesn't yet have any products on the market, it does have the industry's most advanced psilocybin program in the form of its COMP360 therapy for treatment-resistant depression, which recently successfully concluded its phase 2b clinical trials.

Impressively, the phase 2b trial indicated that people treated with COMP360 were significantly more likely to be in remission after 12 weeks than patients in the control group. That bodes quite well for Compass' future prospects of commercializing the therapy, and it's also a big part of the reason why this stock is worth purchasing.

There are an estimated 100 million people worldwide living with treatment-resistant depression. According to Credence Research, by 2027 the market for treatment-resistant depression therapeutics could be as large as $1.38 billion. Capturing even a small share of that market could be worth tens of millions in revenue per year, and Compass is the competitor that's by far the closest to realizing those sales.

Right now, COMP360 is gearing up for its phase 3 trials, which the company hasn't yet announced a starting date for. While it might be a couple of years before an investment in Compass' stock pays off, at the moment the company's course looks clear of obstacles, save one: legality. Still, given promising comments from federal regulators and several municipalities moving to decriminalize psilocybin in the last few years, it's not unreasonable to be optimistic about COMP360's chances in the U.S. market in the near future.

A backdoor entry into cannabis with sustaining pharmaceutical support

Rich Duprey (Jazz Pharmaceuticals): For investors who want to break into the marijuana market but see the sector as too risky because it remains a crapshoot with state-by-state legalization, Jazz Pharmaceuticals may be the chance to buy in.

Not that biotech investing is for the faint of heart, but in Jazz you're getting a pharmaceutical that offers the potential for two blockbuster drugs, one of which is based on cannabidiol, or CBD, the non-psychotropic compound found in marijuana. Through its $7.2 billion acquisition of GW Pharmaceuticals earlier this year, Jazz gained access to Epidiolex, the biotech's treatment for two childhood forms of epilepsy known as Dravet syndrome and Lennox-Gastaut syndrome, as well as tuberous sclerosis complex.

If Jazz is able to get Epidiolex label-expanded for other indications (it expects to begin phase 3 trials for its fourth target indication, epilepsy with myoclonic-atonic seizures), it could eventually grow the therapy into a $1 billion opportunity.

In its recent third-quarter report, the company generated over $160 million in net product sales from Epidiolex, up 21% from the year-ago period and representing 60% of year-to-date sales, indicating growth is accelerating.

As exciting as that possibility is, Jazz also has Xywav, a sleep disorder treatment that's the next-generation advancement from Xyrem. That is a billion-dollar therapy already, generating over $1.3 billion combined between the two over the first nine months of 2021.  Jazz also has a robust oncology platform that's generated more than half a billion dollars year to date.

Yet equally important is the fact that Jazz Pharmaceuticals is profitable and has consistently been so for years, which is why it's shocking investors can pick it up so cheaply. The biotech trades for less than eight times next year's earnings estimates and 10 times the free cash flow it produces, a bargain valuation.

With such a strong financial foundation coupled with enormous growth potential, Jazz Pharmaceuticals is certainly a strong buy for many investors.

Risk tolerance is the biggest consideration

At the end of the day, Jazz Pharmaceuticals and Compass Pathways appeal to slightly different types of investors. While neither is a completely "safe" stock, the fact that Jazz has successfully commercialized therapies and is making revenue from them is a major point in its favor, and it's a much less risky purchase. That's especially true when you consider the legal and clinical hurdles that Compass still needs to overcome before it has the chance to make a single dollar from COMP360.

The other side of the coin is that Compass' stock likely has a large amount of upside over the next few years stemming from the advancement of its clinical trials alone. Because the company isn't selling anything yet, each step forward in the clinic is a big deal for its stock, as it means the first revenue is that much closer and that much more likely to actually occur. So, Compass is better suited for investors who are willing to tolerate higher risk for the prospect of larger (and more delayed) rewards, whereas Jazz Pharmaceuticals is the more reliable option.