If you want to win big, you have to think bigger-picture and long-term.

If you're like most investors, the biggest monetary goal in your life is securing a nice retirement. There are of course a variety of ways to make that happen. Speculative trading, buy and hold, real estate, and even commodities are all paths one can take to amassing their personal fortune.

If just buying and holding high-octane stocks is your preferred style, here's a look at four names that could turn into four-baggers given enough time. In no particular order... 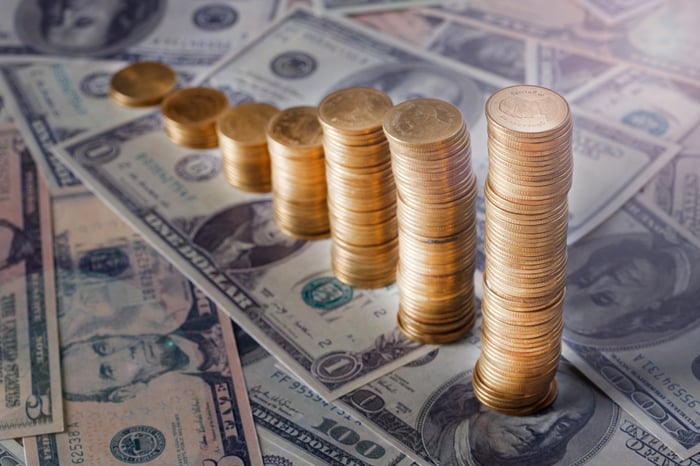 You may know the company is the maker of graphics cards aimed at video gamers and computer visualization professionals like animators or architects. And, to be fair, the gaming market was Nvidia's (NVDA -2.81%) biggest business last quarter, accounting for $3.2 billion of the company's total top line of $7.1 billion. Sales to the gaming market grew a solid 42% year over year.

Nvidia's got a much bigger and less fickle growth opportunity ahead of it, though, in the form of data centers. As it turns out, the underlying technologies that power graphics cards are well suited to manage the massive amounts of digital data now being gathered and processed by all sorts of organizations. Market research outfit Technavio estimates that the global data center market is set to grow at an annualized clip of 21% through 2025, reaching nearly $520 billion per year at the end of that time frame.

Nvidia is only scratching the surface of that market despite incredible growth on this front. Last quarter's data center revenue may have been up 55% on a year-over-year basis, but at less than $3 billion, the sky's the limit.

Booking Holdings (BKNG 0.01%) is the world's biggest online travel agent; you know it better by its multiple trade names which include Priceline, Kayak, OpenTable, and others.

The past year and a half have been tough on the business, and by extension, investors. Its 2020 revenue was less than half of 2019's pre-COVID levels, and while things are looking better this year, they're not leaps and bounds better. Revenue through the third quarter of the year is still trailing 2019's to-date figure by about 30%, as the lingering pandemic keeps travel in check.

Nothing lasts forever, even when it feels like it could. Serious coronavirus cases continue to (mostly) fall as more vaccines are administered, so much so that the U.S. Travel Association predicts that domestic leisure travel will surpass 2019's levels next year. International travel and business travel will take a little bit longer to be fully restored; the association isn't looking for that to happen until 2024. That's still progress, and the need for cost-effective booking services is never going to go away.

Many investors may not realize it, but some of the world's most recognizable chipmakers don't actually make chips. They design them and outsource the "fab" work to foundries like Taiwan Semiconductor Manufacturing (TSM -2.06%). In fact, it's the world's biggest contract manufacturer.

The model has come into question in the wake of the global chip shortage. Doing all this production work in-house wouldn't have necessarily averted the crisis, but it certainly could have removed at least one potential stumbling block encountered in getting new chips from the design stage into users' hands, en masse. That's part of the reason chip names like Intel and China's Semiconductor Manufacturing International Corp. are now building new foundries as a means of better managing their own destinies in the future.

The fact of the matter is, however, it's still often faster and more cost-effective to delegate this chip manufacturing work to companies that specialize in making silicon at scale.

And large-scale production is going to be a necessity for the industry. While the world was already manufacturing a massive number of microchips before the supply chain snapped, Fortune Business Insights predicts the semiconductor market will grow at an average of 8.6% per year through 2028.

Finally, add Thermo Fisher Scientific (TMO 0.12%) to your list of stocks that could quintuple in value if given an adequate amount of time.

The need for this sort of technology has always been steady. The COVID-19 pandemic, however, arguably created a hyperawareness of the fact that the biotech and pharma industries aren't entirely ready to face the unknown; look for ramped-up investments in the detection and prevention of future pandemics. A G-20 panel is calling for at least $75 billion worth of investments in pandemic prevention, while the World Bank suggests that spending of around $20 billion per year for the next 10 years is necessary.

Those numbers jibe with figures from research company McKinsey, which estimates the world will need to spend between $20 billion and $50 billion per year to curb the impact of global contagions, after an upfront investment of between $85 billion and $130 billion. Of course, localized governments and private enterprises will want to take their own preventive measures as well. For perspective, Thermo Fisher currently does about $40 billion in sales per year.

This suggested spending won't likely ever translate into red-hot growth for the company. But, it will support above-average growth for a long, long time. That's in addition to the business Thermo Fisher Scientific is already winning anyway.