Deciding when to buy or sell stocks can be a difficult decision for some investors. This has likely been the case for those investing in the cannabis market, where three years ago the projected future leaders may not have lived up to their full potential, and over the course of time, alternative selections look like better long-term plays.

In 2018, Canada launched legalized recreational cannabis sales. The hype leading up to and just after the launch sent stocks like Canopy Growth (NASDAQ:CGC) skyward toward $50 per share. Since then, inventories have built up, profits did not live up, and stock prices sank. Now, recreational-use cannabis is legal in 19 states in the U.S., and multi-state operators are generating record quarterly revenue supporting positive income on the balance sheet. Could this mean it's time to switch your cannabis investments in Canadian companies over to U.S. companies? 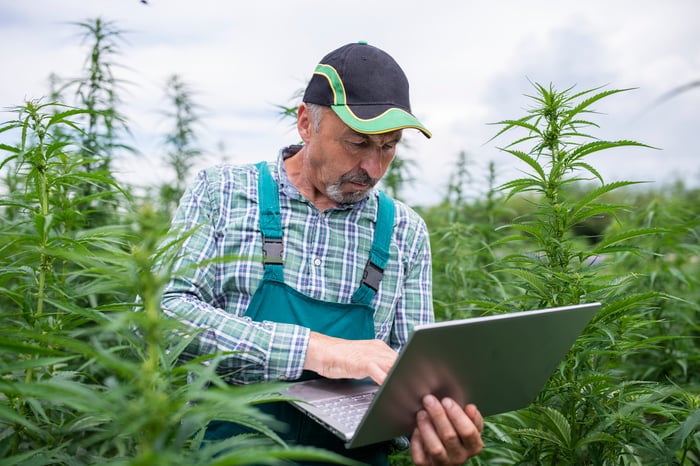 Three years of legal sales and still no profit

Some of you may think that three years without profits is not that long, so why bail out now? Although Canopy can still lay claim to having Canada's No. 1 market share in premium flower, market share decreased by 310  basis points. It also kept its No. 2 ranking in market share of value flower but realized a drop of 540 bps.

In its FY 2022 second quarter ending Sept. 30, dried flower in the recreational cannabis market was the top revenue generator for Canopy at $56.8 million but declined by 11% for the quarter from the previous year. If the company continues to see that level of decline, it will be an uphill battle to overcome. This could lead to additional sales and marketing expenses to gain flower share back or make traction across cannabis 2.0 forms -- vapes, topicals, edibles, and beverages -- which combined makeup only $9.2 million of quarterly revenue in the recreational cannabis market for Canopy.

The company identified the growth of competition in the value flower category as the top reason for the decline. Most notably, Auxly Cannabis Group and Organigram both doubled their market share during the third quarter of this year.

The loss in market share by Canopy came from a 13% decline in revenue for the quarter on a year-over-year comparison. The reduction in revenue led to an adjusted EBITDA loss that doubled the loss of last year's FY Q2, driven by lower sales and a negative 54% gross margin. These results turned the stock into a whack-a-mole, getting crushed by as much as 14% in one day on Nov. 5.

Possibly foreshadowing what was to come in the Q2 report and beyond, Cantor Fitzgerald analyst Pablo Zuanic cut his 12-month price target for Canopy not once, but twice within a few months. In September the number was dropped from $24 to $17, and again in November after the earnings release to $14.90. That target price was mirrored by Barclays ($14) on Nov. 18, rating the company as equal weight. The stock price currently sits around $13, having lost over 75% since its 52-week high of $56.50. Meanwhile, current earnings per share sits at a loss of $2.74.

Profits may eventually be further down the road, but as the end of the year approaches, I've decided to take my losses now and offset some of my other portfolio gains for tax purposes. Meanwhile, I can get in on a multi-state operator that I think will help make up for those losses in a shorter period of time than by holding on to Canopy. I can still do this without veering too far off my rule of sticking with a stock for three to five years.

One cannabis operator ranks above the rest in leadership

Another top rule many successful investors follow is making sure the companies they invest in have strong leaders who can drive innovation, market growth, and provide positive returns for investors. And when a company such as Cresco Labs (OTC:CRLBF) is given the honor of top cannabis operator on Inc. magazine's well-respected list of the 250 best-led companies (ranked No. 74 overall), it makes the decision of a portfolio swap that much easier.

Cresco is a vertically integrated multi-state operator based out of Chicago, with a wide footprint across the U.S. supported by operations in 10 states and nine different brands. Considered by some cannabis industry websites as "well worth the attention of consumers" and "a company that is headed somewhere," Cresco has achieved success based on quality.

Cresco grows its products domestically and has full control over the quality and supply chain. Its primary focus on U.S. markets where demand is strong and its reliance on quality should allow the company to manage inventory well while growing sales -- high-quality products and a strong brand lead to demand, which results in minimal wasted inventory.

It's also possible that Cresco's high-quality products could attract the attention of government researchers. Provisions of the latest infrastructure bill allow researchers to study consumer products from local dispensaries instead of having to use only government-grown cannabis.

In addition to being considered a best-led company, Cresco is also the best-selling cannabis brand in the U.S., with Cresco Cannabis leading the way in its home state of Illinois as well as Pennsylvania. In its Q3 report this was underscored by $215 million in revenue, setting company quarterly records in both wholesale sales ($109 million) and retail sales ($106 million). Record revenue led to a 24% increase in adjusted EBITDA, which hit $56.4 million, and gross profit margin is expected to hit 50% for the remainder of the year. As a reminder, Canopy's gross profit margin in Q2 FY2022 was -54%.

Some investors may see the drop in Canopy's stock price as the ultimate buy on the dip -- more like a La Brea sinkhole -- opportunity in the Canadian cannabis market. But for me, I'll take the path of a more promising outlook from a best-led company with a quality product that doesn't rely on federal legalization to make money in the burgeoning U.S. market.

It also doesn't hurt that the same respected analyst who lowered his price target on Canopy provided a price target on Cresco ($19) with the potential for a 100% gain over the current stock price just above $9. That's what an investment in Cresco Labs offers, which led me to replace Canopy in my portfolio.