Renewable energy stocks have had a wild year, jumping early in the year as the market pushed the entire sector higher. But values fell as the euphoria wore off and companies had to start proving they were worth high valuations.

Three of our contributors highlighted the renewable energy stocks they're thankful for and SunPower (NASDAQ:SPWR), Enphase Energy (NASDAQ:ENPH), and Lucid Group (NASDAQ:LCID) topped the list.

Travis Hoium (SunPower): The last few years have been a wild ride for SunPower. The company sold off its utility-scale solar business, spun off its solar panel manufacturing business, and is in the process of finding a buyer or other alternative for its commercial solar business. What's left is the residential solar installation business that's become one of the most valuable parts of the solar energy market. And you can see below that it's treated investors very well. 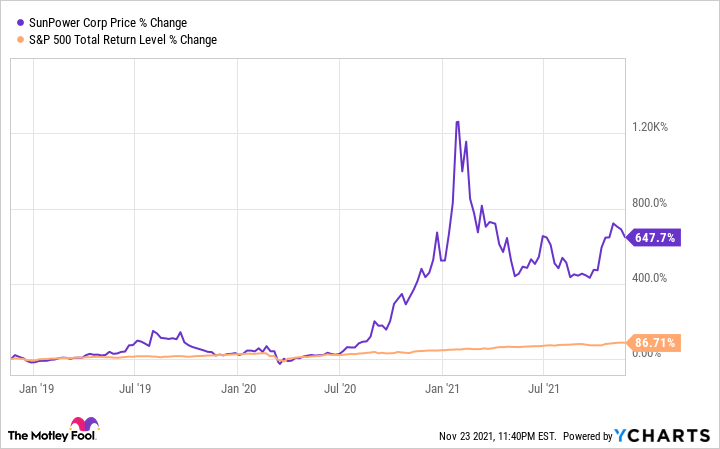 I'm thankful that SunPower found a path to success on the market and can now focus on becoming a growth stock. The company has built the infrastructure to sell, design, install, and finance residential solar projects at scale, which is what the market is rewarding today. And it made a great deal in selling its inverter business to Enphase Energy for stock that ultimately saved the company.

The next few years will be important for SunPower's long-term prospects. If it can grow in residential solar and improve profitability along the way the stock could continue to rise. But solar installation has been a competitive business and companies have risen and fallen over the last decade. What I think will separate SunPower long-term is the ability to combine high-quality solar installations with energy storage and monitoring features. As all of these energy products come together, SunPower will keep giving us new energy products to be thankful for.

An investment for the planet

Howard Smith (Enphase Energy): I first heard of Enphase Energy seven years ago, when I was investigating adding solar panels to my roof. I didn't invest in the company, or even consider it at the time. It was just a name on the equipment controlling and monitoring the solar power coming into my home after I made the investment. Seven years later that investment in the solar panel system has about paid for itself -- including tax and other incentives -- and I wish I had bought Enphase stock more than 2,000% ago. 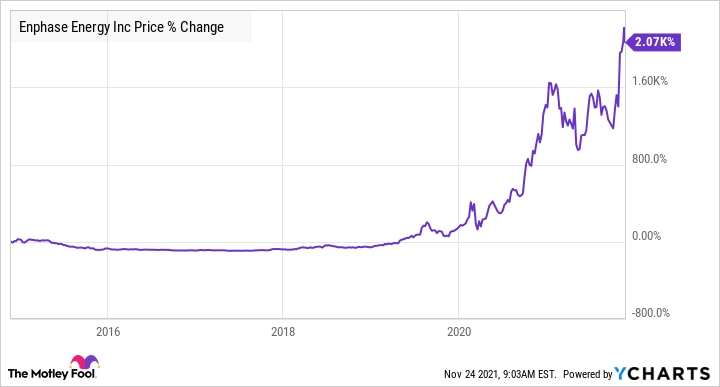 My equipment may be the company's first-generation microinverter and related technologies, but Enphase recently released the eighth-generation microinverter system. The IQ8 is an all-in-one system that the company says is "capable of forming a microgrid during a power outage using only sunlight, providing backup power even without a battery." While it is currently only available in North America, that will change soon as Enphase has been working to grow globally.

Enphase recently launched its battery storage system in Belgium and has also just expanded into Brazil and Italy. And the company is not just growing geographically, it is also adding to its addressable market base. Enphase just announced plans to acquire ClipperCreek, an electric vehicle (EV) charging solutions company.

Enphase plans to integrate that technology into its product base giving its global distributors and installers another product to offer alongside its solar and battery technology systems. The move into the EV sector also gives Enphase a path "to enable bi-directional charging capability for vehicle-to-home and vehicle-to-grid applications."

Investors who have held Enphase stock through its explosive growth are likely thankful they have remained patient. But the stock isn't the only part of Enphase to be thankful for this year. Enphase's products can provide nice returns on investment in and of themselves, while supporting the conversion to renewable energy that the entire planet can be thankful for as well.

Daniel Foelber (Lucid Group): From its pre-merger stint with Churchill Capital IV, to its merger in July, to reaching deliveries in late October, Lucid has given investors a wild, volatile, and quite often stressful experience in 2021. But so far this year, Lucid is the best-performing automaker in the world -- giving investors who have stayed the course a fourfold return.

In just a year, Lucid has transformed itself from an unproven company to a company with some of the best technology in the entire electric vehicle (EV) industry.

The short-term outlook looks impressive. Its balance sheet is rich with cash, its manufacturing plant has enough capacity to meet 2022 demand, reservations are now over 17,000, and it is on track to build 20 sales and service centers throughout the U.S. and Canada before year-end.

The medium-term outlook looks excellent as well. In 2022, the company expects to be producing four versions of the Lucid Air sedan at price points ranging from $77,400 to $169,000. It's also further growing its manufacturing capacity to 50,000 units by 2022 so it can handle production of the Air and Gravity SUV in 2023.

Over the long term, Lucid expects to expand into Saudi Arabia and China, its second- and third-largest markets by demand. By 2026, it expects to deliver over 250,000 units. It also plans to grow its manufacturing capacity to 500,000 units by the end of the decade.

Over the last three months, share prices of Lucid have dipped as low as $16.12 per share and as high as $57.44 a share. To say it has been a rocky road would be an understatement. Yet despite the volatility, long-term investors hope that Lucid's growth story is maybe only in the first or second inning. The lesson here is that winning technology and a competent management team able to deliver on promises is what makes a great company. As long as Lucid continues to capture market share and charts a path toward profitability, investors are likely to be thankful for years to come.

A lot to be thankful for

Not only are these companies building the infrastructure to reduce emissions and provide clean energy for the world, they're giving investors market-beating returns. That's a win-win combination in energy and we're thankful for these stocks as a result.