HP's (NYSE:HPQ) stock surged 10% to a new all-time high after the PC and printer maker posted its fourth-quarter earnings report on Nov. 23.

Its revenue rose 9% year-over-year to $16.7 billion, beating estimates by $1.3 billion. Its adjusted earnings grew 52% to $0.94 per share, which also cleared expectations by six cents.

HP didn't provide any exact revenue guidance for fiscal 2022, but it expects its adjusted earnings per share (EPS) to increase 8%-14% year-over-year in the first quarter and rise 7%-13% for the full year. The midpoints of both forecasts exceeded Wall Street's expectations. 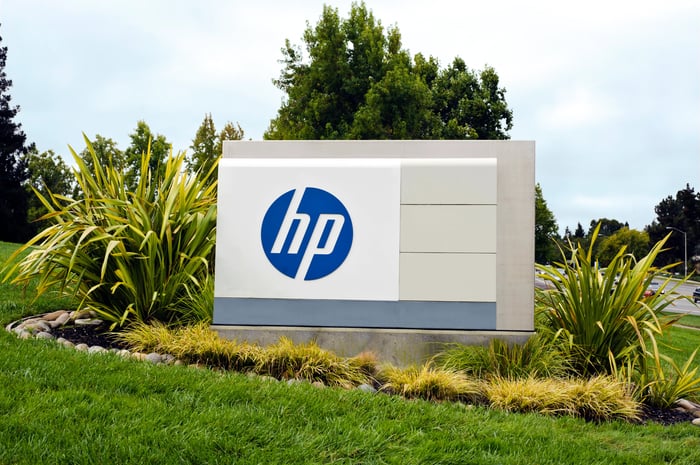 HP's numbers look solid, but does its stock still have room to run after rallying more than 50% over the past 12 months? Let's review three reasons to buy HP -- as well as one reason to sell it -- to decide.

1. Its PC sales are still strong

HP's personal systems unit, which sells notebooks, desktops, and workstations, generated 71% of its revenue during the quarter. This segment experienced strong growth during the pandemic as more people upgraded their PCs to work and attend classes remotely.

However, the bears claimed the segment's growth would stall out this year as the pandemic-related tailwinds faded and the PC market faced chip shortages and supply chain disruptions.

The segment's consumer-oriented business certainly experienced a slowdown over the past two quarters, but the bears seemed to underestimate the resilience of the commercial business, which recovered as more businesses reopened and upgraded their aging systems.

During the conference call, CEO Enrique Lores said HP "saw the strongest demand and highest profitability" from its Windows-based commercial products during the quarter, and its backlog remained "significantly elevated" as it worked through the component shortages. In other words, HP is still selling its commercial systems as quickly as it can produce them.

2. Its operating margins are stable

Another bearish argument against HP is that the shrinking margins of its printing segment will cause its profits to wither. However, HP's total operating margins actually expanded 120 basis points year-over-year, with significant improvements in both the PC and printing segments:

For both segments, HP attributed its improving margins to favorable pricing and a better mix of higher-margin products -- which largely offset its higher commodity costs and new investments.

That's not a perfect balance, but HP's stable operating margins and big buybacks (including $1.75 billion in repurchases in the fourth quarter) should enable it to continue growing its EPS at a healthy rate.

3. A low valuation and a high dividend

HP's stock has more than doubled since Xerox (NYSE:XRX) abandoned its hostile bid last March. It's worth about $40 billion today -- compared to the $35 billion that Xerox offered.

However, HP's stock still trades at just eight times forward earnings. It also pays a generous forward dividend yield of 3.1%, which is supported by a low payout ratio of about 24%. That low valuation and high dividend yield could make it a good defensive play for a volatile market.

The one reason to sell HP: Its printing business

HP's printing business experienced a growth spurt during the pandemic as more people bought printers for stay-at-home projects, which offset the slowdown in commercial sales as businesses closed down.

However, the growth of the consumer segment decelerated over the past year as the pandemic-related tailwinds faded, while the commercial segment only stabilized slightly against its steep declines in 2020:

As a result, the printing segment's anemic 1% year-over-year growth in the fourth quarter indicates the business is still shrinking. Long-term headwinds -- including lengthy upgrade cycles, the rise of paperless workplaces, and competition from generic ink and toner makers -- could all throttle this weaker segment's growth for the foreseeable future.

Do HP's strengths outweigh its weaknesses?

HP's printing business will remain the company's weakest link, but its prospects could gradually improve as it expands its industrial 3D printing unit and its subscription-based Instant Ink service.

HP's personal systems business should remain strong, and its growth could even accelerate again as the component shortages end. Meanwhile, its big buybacks, high dividends, and low valuations should all limit its downside potential and attract more value-oriented investors.

Simply put, HP's strengths still easily outweigh its weaknesses, and it's a good stock to own if you're nervous about a potential recession or a market crash.