If you go down the sports beverage aisle of your local grocery store, you'll see a plethora of brands. And most likely, you'll see a majority of shelf space taken up by Gatorade, the leader in market share at 75%.

But if Coca-Cola (NYSE:KO) has its way, that ranking will begin to change hands as the company continues to make moves toward capturing the leading market share. Two moves in particular should have investors excited. 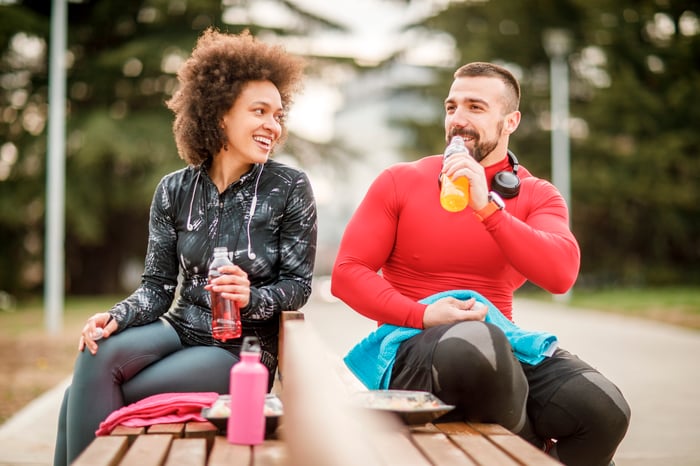 Suiting up for a battle with Pepsi

In 2018, Coca-Cola bought a 15% stake in what is now the No. 2 brand by market share in sports drinks, BodyArmor. On Nov. 1 this year, Coca-Cola made its largest brand acquisition ever, obtaining the remaining 85% stake for $5.6 billion in cash, with the goal of overtaking Pepsi, owner of Gatorade, as the No. 1 sports drink maker globally.

Although Pepsi owns the market share leader, Coca-Cola could make inroads quickly. In addition to its own leading sports drink, Powerade, BodyArmor now gives Coca-Cola a total 22% share in the overall market. And according to Amazon, the current best-selling sports drink on the website is a BodyArmor 12 pack of 16-ounce bottles. But before investors get too excited, it's worth noting that five of the other top-six products in that category are all under the Gatorade brand.

Bolstering an iconic brand with a top ad agency

Although some would see Coca-Cola as the top iconic beverage brand, it could certainly benefit from attention in sports beverages as it looks to add to the $4.1 billion in sales expected to come from BodyArmor for 2021. One way to do that is to sign with a top advertising agency.

On Nov. 8, only a week after announcing the BodyArmor acquisition, Coca-Cola signed WPP, the leading agency in the world by revenue, as its new global marketing network partner responsible for creative, media, data and marketing technology for the company.

The news media also helped Coca-Cola by bringing to light what some might consider a feel-good story involving the relationship between BodyArmor and NBA star Kobe Bryant. In 2014, Bryant became the third largest investor in BodyArmor, paying $6 million for 10% of the company. After the acquisition by Coca-Cola, that investment produced a return of $400 million for the estate of Bryant, who died on Jan. 26, 2020, along with his daughter Gianna in a helicopter crash.

It's possible that Kobe Bryant fans everywhere will stay loyal to BodyArmor, just as Michael Jordan fans have stayed loyal to Nike for so many years. In fact, Jordan has been a spokesman for Coca-Cola as well.

Growing revenue and increasing dividends are the norm

As WPP works with Coca-Cola on generating new campaigns, the global sports drink market is projected to grow at a compound annual rate of 5.3% over the next 10 years, reaching a value exceeding $25 billion. With 75% of the market gulping down Gatorade, Coca-Cola will be banking on its latest acquisition to pay off quickly in order to take advantage of a growing market. It will also look to continue its success achieved during the third quarter.

In that quarter, the company registered increases in revenue, operating margin, and earnings. The highlight was 41% growth in earnings per share (EPS) to $0.57, and adjusted EPS of $0.65, which beat Wall Street estimates by 12%. This led to a revision of its full-year EPS guidance to a range of 15% to 17%, compared to a previous range of 13% to 15%.

Although the original response by investors was positive, the stock has since dropped back down to the same level it was prior to the earnings release. But when looking at some intermediate ups and downs in Coca-Cola shares, remember that the overall trajectory across the past 10 years is up and to the right. The only significant drop over that span was in line with the pandemic in 2020.

It's been said that when something looks too good to be true, it usually is, and that certainly applies to investing. But I think Coca-Cola has a lot going for it, including an iconic brand, new potential for capturing share in a growing market, a relationship with the top advertising agency, and increasing revenue and earnings. And for those who like a little extra something in their beverage investment, it pays $1.68 per share annually in dividends, for a 3% dividend yield, roughly double the current S&P 500 yield.

Investors in 2016 who got in with a five-year plan would be looking at a gain of 34% right now, not including the potential from dividend reinvestments. And that includes the dramatic drop during 2020. Long-term investors who get in now could be in line for much larger gains.