Black Friday might not have created the same level of stock market discomfort that prompted the naming of Black Tuesday in 1929 or Black Monday in 1987, but stocks were nonetheless under pressure on the day after Thanksgiving. As of 10 a.m. ET on the holiday-shortened session, the Dow Jones Industrial Average (DJINDICES:^DJI) was down 790 points to 35,014. The S&P 500 (SNPINDEX:^GSPC) had lost 73 points to 4,628, while the Nasdaq Composite (NASDAQINDEX:^IXIC) had fallen 212 points to 15,632.

A new COVID-19 variant in South Africa prompted worries among investors across the globe. Market participants had already been concerned about a sharp rise in case counts in Europe, with correspondingly poor trends in the U.S. as well. Now, many fear that new restrictions on travel and other activities could bring about a return to conditions in 2020.

That's especially bad news for cruise ship operators, which have struggled just to sustain themselves financially in the hope of getting passengers on board throughout 2022. 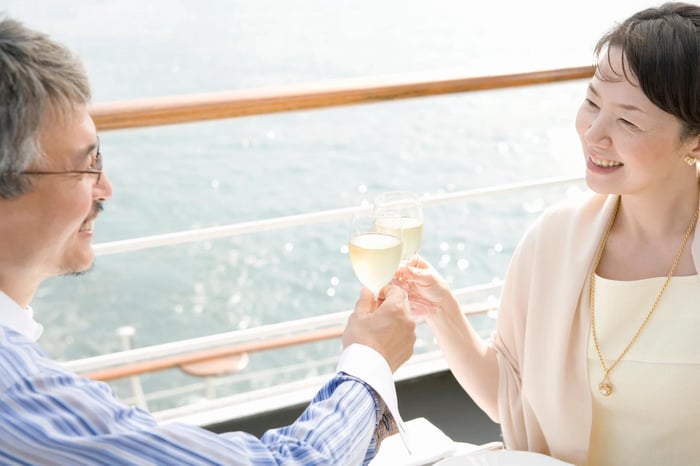 A bad day on the seas

Cruise stocks were among the hardest hit in the market Friday morning. Carnival (NYSE:CCL) led the way lower with an 11% decline. Royal Caribbean Cruises (NYSE:RCL) and Norwegian Cruise Line Holdings (NYSE:NCLH) weren't far behind, with losses of 10%. Even the more-diversified Disney (NYSE:DIS), whose cruise operations represent only a small portion of its overall business, saw its stock fall more than 3% Friday morning. For Carnival and Norwegian, the downward move was enough to send the stocks to new lows for the year.

Cruise-operator shareholders were already bracing for what they expected to be a long period of getting back up to full speed. In Norwegian's third-quarter financial report earlier in November, for example, the company said it was still burning cash at a rate of about $275 million per month. It expected that to rise to $350 million per month in the fourth quarter as Norwegian proceeded through its phased relaunch of its ships. Losses exceeded $800 million for the quarter, and Norwegian had to take additional steps to ensure ample liquidity amid rising debt.

Indeed, it was the hope for a full rebound in 2022 that seemed to buoy sentiment for cruise stock investors. Norwegian had reported that bookings for 2022 were in line with record levels from before the pandemic in 2019. Carnival said much the same thing a few months ago, reporting record high bookings for the second half of 2022. Royal Caribbean believed in late October that it could overcome nervousness about the COVID delta variant and keep bringing more of its ships back into service by the end of 2021.

What will the future bring?

Other travel-related companies saw similarly alarming declines. Major U.S. airlines were down between 5% and 10%, with those more exposed to international travel seeing larger drops. Hotel operators also saw losses, with Marriott International (NASDAQ:MAR) losing almost 10% on the day so far.

Cruise ship operators are arguably in the most precarious position financially. Airlines received substantial financial assistance from the U.S. government, and political leaders are likely to see their survival as being more important to the travel infrastructure than cruise ships are. Most other travel-related companies have retained more financing options than cruise companies, which have already taken most of the obvious extraordinary measures available to them to stay afloat thus far.

Travelers clearly want to take to the seas. But if the newest COVID variant proves to be as bad as some fear, then they might not get that opportunity. Despite the willingness of investors to keep providing funding to cruise operators, any prospective future shutdown could prove to be the last straw for the ailing industry.