Metaverse millionaire has a nice ring to it, doesn't it? There probably will be some investors who become millionaires if the metaverse delivers on its potential.

Several metaverse stocks are receiving the most attention right now. Obviously, Meta Platforms (NASDAQ:FB), formerly known as Facebook, could be a huge winner. The company is pouring billions of dollars into its development efforts. Nvidia, Unity Software, and Roblox also are staking their claims to the metaverse.

But there are some less-prominent companies that could be big winners. Here are two under-the-radar metaverse stocks that could make you a fortune. 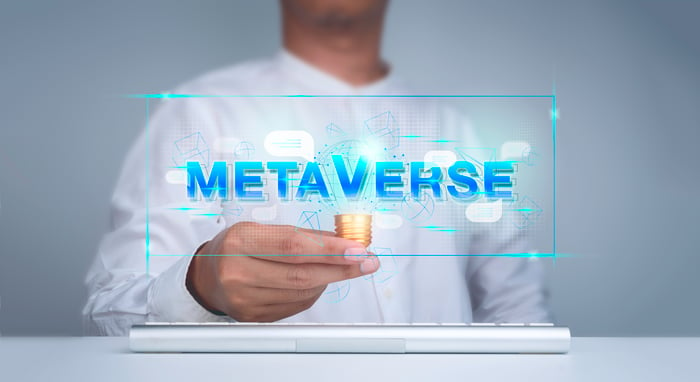 Matterport's technology enables the creation of "digital twins" of physical spaces. Homes, apartments, offices, boats, and more can be virtually replicated. So far, Matterport has 6.2 million spaces under management -- more than 100 times the rest of the market combined.

There are lots of applications for digital twins. Potential homeowners can take 3D tours of the houses they're considering. Designers can import digital twins into computer-aided design software to improve efficiency in building information modeling. Insurers can process claims faster with 3D models of property damage. And those use cases represent just the tip of the iceberg.

Matterport estimates that its total addressable market tops $240 billion by focusing on these kinds of applications. But the company's opportunity could be even bigger than that by moving the physical world into the metaverse.

It's already partnering with Meta Platforms in making 1,000 digital twins available in a dataset for academic, non-commercial uses. This data set is being used by researchers to teach robots and artificial-intelligence systems how to interact with the physical world.

Matterport's technology could be key in uploading real-world buildings into the metaverse. With Meta Platforms CEO Mark Zuckerberg envisioning the ability to teleport anywhere in the metaverse, bringing the physical world into the metaverse seems to be important to his company's efforts.

Although Matterport stock has more than doubled this year, the company's market cap is still around $6 billion. Even without the potential for the metaverse, Matterport should have plenty of room to run. But with the metaverse, this stock could be a really huge winner.

Investors haven't fared so well with Immersion (NASDAQ:IMMR). The tech stock has lost nearly half of its value so far this year. But the metaverse could present a tremendous opportunity.

Immersion's business model is to license its technology to manufacturers. Customers include automotive suppliers, gaming-device makers, and mobile-device makers. Apple, Bosch, Google, Nintendo, Samsung, Sony, and many other companies use Immersion's haptic systems.

Haptic technology will likely be in high demand as the metaverse takes off within the next few years. There are other companies, including Meta Platforms, that will be major players in meeting that demand. However, Immersion's haptic expertise and broad intellectual property portfolio could give it a key advantage.

The company's market cap is only around $200 million. Immersion could grow much larger if the rise of the metaverse serves as a major catalyst for haptic-technology licensing sales.