Moderna (NASDAQ:MRNA) has proved itself when it comes to handling the original coronavirus and the variants that have emerged since the beginning of the year. The biotech company's vaccine has offered protection across the board. In fact, some real-world studies have even shown Moderna's vaccine to be more efficacious than those of its rivals.

But things happen fast in the world of coronavirus prevention. And a new challenge is right here, right now. It's called the omicron variant. South Africa detected the first case of it in early November, and since, the variant has spread to Europe. Now, the big question is whether vaccine giant Moderna can beat this quickly spreading variant. The answer could be critical for Moderna -- and its share price. Let's take a look at where Moderna stands. 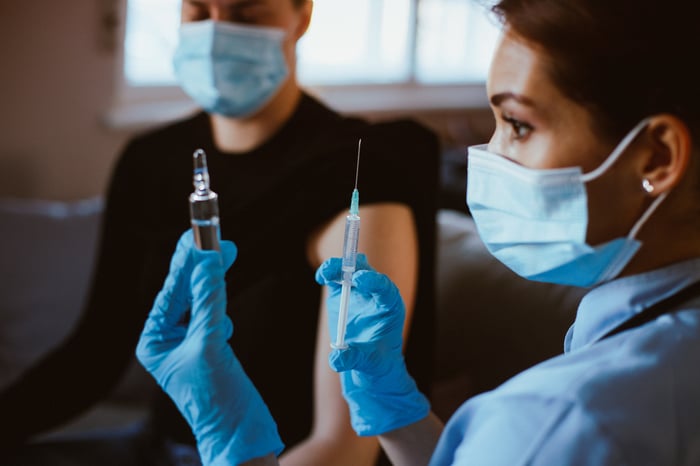 The variant may be moving quickly. But so is Moderna. The biotech company on Friday announced its strategy. Moderna launched development of a booster candidate specifically targeting omicron. And the company is testing three other booster candidates that already are in clinical trials against this new variant.

Here's what we know so far. The strain-specific candidate could be brought from the drawing board to clinical testing within 60 to 90 days. This is quick by traditional standards. But it may not be quick enough to limit the spread of omicron. That's because clinical studies add months to the timeline.

Moderna's best chances of taking down omicron probably lie with its current vaccine -- or the candidates already involved clinical trials. The vaccine represents the best option since it's already available. As for candidates in the clinic, if results are positive, they could make it to market months ahead of a candidate that hasn't reached clinical testing yet.

One of these candidates involved in human studies is a higher-dose booster. It's dosed at the same level as the vaccine -- 100 micrograms. Moderna's authorized booster is dosed lower, at 50 micrograms.

The second two candidates are particularly interesting. That's because Moderna created them with the idea of covering potential mutations. One of them includes mutations found in omicron as well as in the beta variant. Moderna has completed dosing in a trial that could be pivotal -- that means the next step would be a regulatory request. And the other includes mutations found omicron, beta, and delta variants.

Putting booster candidates to the test

Moderna says it plans to test blood serum from participants in these trials to measure whether the candidates offer strong protection against omicron. The company also is testing its current vaccine against omicron. Data from the studies is expected in the coming weeks.

Why is Moderna's ability to handle omicron so important? Variants are what's been keeping the pandemic going. For example, cases were declining earlier this year -- until the delta variant quickly spread and pushed them higher again. For a company to maintain leadership in the vaccine market, it must show that it can handle emerging variants -- and fast.

This is particularly important now. For two reasons. First, investors have already started worrying about what vaccine revenue will look like post pandemic. And second, newcomers like Novavax may begin carving out market share. These two elements represent threats to Moderna's dominance. But strong data versus variants could reinforce the idea that Moderna has what it takes to generate significant vaccine revenue well into the future.

So, what are Moderna's chances of beating omicron? It's impossible to guess what Moderna's data will show. But there are two major positives. First, Moderna already has successfully handled past variants. This demonstrates the vaccine's broad coverage -- even when the coronavirus spike protein mutates. And second, Moderna is trying a few different approaches instead of just one. This clearly increases its chances of success. Moderna also has the advantage of producing mRNA vaccines. They are much quicker to make than traditional vaccines. And that means they eventually can be updated more quickly.

Now, what about Moderna's share price? The stock soared 19% in Friday's trading session amid news of omicron gaining ground. The next big catalyst likely will be data from Moderna's blood serum tests. The results probably will determine whether the biotech stock climbs even higher -- or returns to the doldrums that it experienced in early November.