The stock market did its best to recover lost ground on Monday, and in general, it did an excellent job. As of 1:30 p.m. ET, the Dow Jones Industrial Average (DJINDICES:^DJI) was up 332 points to 35,231, making back less than half of its 900-point swoon from Friday. Yet the S&P 500 (SNPINDEX:^GSPC) was up a healthier 73 points to 4,668, and the Nasdaq Composite (NASDAQINDEX:^IXIC) actually made back almost all of its Friday losses, rising 314 points to 15,805.

Electric vehicle (EV) stocks have done extremely well, with manufacturers of EVs having seen impressive gains. Yet increasingly, investors have sought new ways to play the EV revolution beyond simply looking at the companies that build those vehicles. Many believe that the rise in fortunes for rental car companies Hertz Global Holdings (NASDAQ:HTZ) and Avis Budget Group (NASDAQ:CAR) is tied to the prospects for their participation in the growing EV industry. Below, we'll look at how these stocks are performing on Monday and what their longer-term prospects look like. 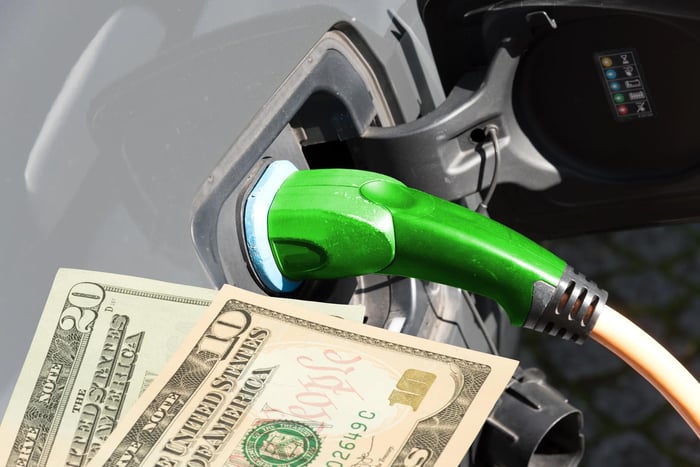 Hertz keeps climbing out of bankruptcy

Monday's 6% rise in shares of Hertz Global Holdings came after the rental car company announced the latest in a series of capital restructuring efforts. After having issued $1.5 billion in senior debt in order to repurchase a similar amount of preferred stock, Hertz announced a plan to repurchase common shares that had shareholders pleased.

The board of directors authorized a share buyback program of up to $2 billion of stock. The new program is effective immediately, although the balance beyond the previously authorized $200 million will become available after the completion of its tender offer for preferred shares is complete.

Hertz has already done an extraordinary job in emerging from bankruptcy while still leaving former stockholders with a stake in the company. The recovery from the worst conditions of the pandemic has left Hertz in a better financial condition, and the rental car company is now taking advantage of its improved strength.

The reason this is relevant in the EV space is that Hertz recently made a groundbreaking deal with Tesla (NASDAQ:TSLA) to buy 100,000 vehicles for its rental fleet. The move has benefits for both companies, bringing potential new demand to Hertz while representing a whole new market for Tesla.

Meanwhile, Avis Budget shares were also up sharply, rising 5%. The company got favorable comments from analysts at Jefferies, helping to drive positive sentiment for the Hertz rival.

Both Avis and Hertz have benefited from stresses on the automotive market. A lack of components like semiconductors has restrained car production, driving up used-car prices and therefore boosting the value of the two rental car companies' vehicle fleets. Moreover, with demand for rental cars higher, Avis has greater pricing power than it had before, and that's boosting profit margins.

It's also reasonable to expect that Avis won't let Hertz have the EV market all to itself. The company didn't make any explicit disclosures following the Hertz-Tesla announcement, but executives did make it clear that their lack of news didn't mean they weren't pursuing potential EV deals with manufacturers.

At this point, Hertz and Avis are enjoying a favorable confluence of strong industry conditions, demand from consumers, and an interest in embracing new technology. Although it might seem to be a stretch to consider them to be true EV plays, both rental car companies could benefit if consumers make clear their wish to rent EVs.