There's a new cast list of electric vehicle (EV) contenders gunning for a slice of the auto industry pie. Among them are Rivian Automotive (NASDAQ:RIVN), Lucid Group (NASDAQ:LCID), and Nio (NYSE:NIO).

With the dust somewhat settled, industry watchers now find Rivian, Lucid, and Nio all worth over $65 billion. Let's find out which electric car company has the best chance to become the next Tesla (NASDAQ:TSLA). 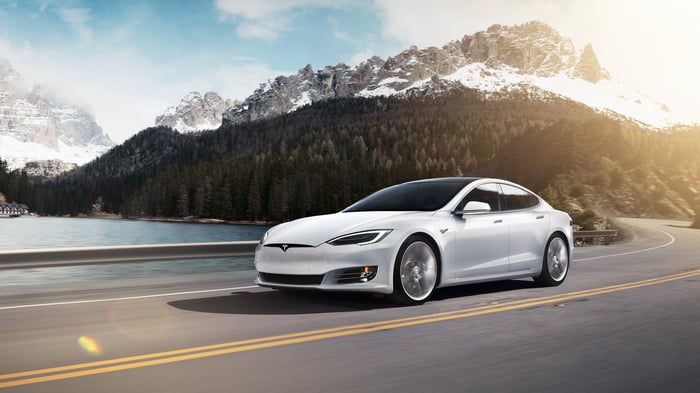 Lucid began deliveries of the long-range and performance versions of its Air Dream Edition luxury sedan in late October. But at a price tag of $169,000, it's hardly a viable option for most people.

However, Lucid's 17,000 reservations are scattered throughout the four trims of the Air, which is a good sign that there's demand for both Lucid's expensive and more "affordable" options. Lucid plans to use the $4.4 billion in cash it got from its merger with SPAC Churchill Capital IV in July to fund its 2022 operations -- which mainly consist of producing and delivering vehicles, expanding production capacity to 50,000 units per year, rolling out all four versions of the Lucid Air, and preparing to debut the Lucid Gravity SUV.

Aside from a management team stacked with past experience at Tesla, Apple, and other major tech and financial firms, what Lucid has going for it more than anything else is some incredible battery technology that's built completely in-house. The Lucid Air was named the 2022 MotorTrend Car of the Year largely due to its over-500-mile range and over-1,100 horsepower. The efficiency of its battery pack should translate well to the lower-priced trims of the Air, as well as future models.

Carving out its own niche

Lucid may be crowned the king of range, but Rivian is doing everything it can to limit its competition and tap into what it thinks will be a ripe subsector of the EV market. Roughly a third of the company is owned by Amazon (20%) and Ford Motor Company (12%).

Like Lucid, Rivian's specs are impressive. The R1T has an estimated range of 314 miles and a towing capacity of 11,000 pounds. For comparison, the Ford F-150 Lightning has an estimated range of 230 miles (300 miles for the extended range version) and a towing capacity of around 10,000 pounds. But Rivian is hoping to distance itself from the competition as much as possible by tapping into the outdoor community. Rivian's brand image is like if REI and Jeep got together and made electric trucks and SUVs.

Flush with $12 billion in cash, Rivian has the makings of greatness. However, it is completely unproven as a public company. There's still a long laundry list of unchecked boxes that it needs to fill -- the first being sustaining mass customer deliveries. Until management proves it can efficiently allocate the capital it's been given, there are simply too many question marks facing Rivian at this time.

The value of volume

Before Lucid and Rivian hit the scene, it was Chinese electric car maker Nio that was getting the bulk of "FOMO" (fear of missing out) attention from EV investors. Unlike Lucid and Rivian, which have yet to achieve sizable deliveries, Nio delivered 10,628 vehicles in September alone, and has now delivered over 142,000 vehicles in total. By comparison, Lucid plans on delivering just 20,000 vehicles in 2022, and Rivian has about 55,000 reservations for its R1T truck and R1S SUV and has an annual production capacity of 150,000 units at its plant in Illinois.

Nio has hit some supply chain snags, but the company is facing a lot of optimism on the way to Nio Day 2021 in mid-December. With a three-year advantage over Lucid and Rivian, Nio is a good bet for investors that value experience over potential.

Tesla's success stems from its technological edge. For that reason alone, the company that has the best chance to become the next Tesla could be Lucid.

What Lucid has done better than Nio or Rivian is stuck to its schedule. The company hit its production and delivery targets. Until it breaks that trend, there's reason to believe it can hit its 2022 goals, and beyond that, scale production while sustaining an over-20% gross margin (similar to Tesla).

That being said, Lucid, Rivian, and Nio are several years away from even being considered the next Tesla. The best approach for most investors is probably to buy a basket of multiple EV stocks. It's a good way to protect yourself from steep losses in case one company fails, but also give yourself room for an investment to exponentially compound.

Another helpful practice is to follow the story as these EV newcomers mature. As with all young industries, new competition and developments could shift the dynamics on a dime. Staying up to date on industry happenings is the best way to ensure you're following the companies that have the best chance of becoming the next Tesla and not caught holdings shares of a company that's on a downward spiral.