If you're a fan of stable healthcare companies that have the potential to pay you ever-rising dividends until the cows come home, Viatris (NASDAQ:VTRS) might well become a dream stock. Though the generic drug manufacturer hasn't actually paid its dividend for a full year or increased it as of yet, there's already some evidence that it's on track to be a winner.

And with those positive signals comes a lot of attention from investors, many of whom are concerned that the company's potential future success is overblown or that it has already pushed the stock's valuation to unsustainable levels. Those concerns are valid, but I tend to disagree with them, and here's why. 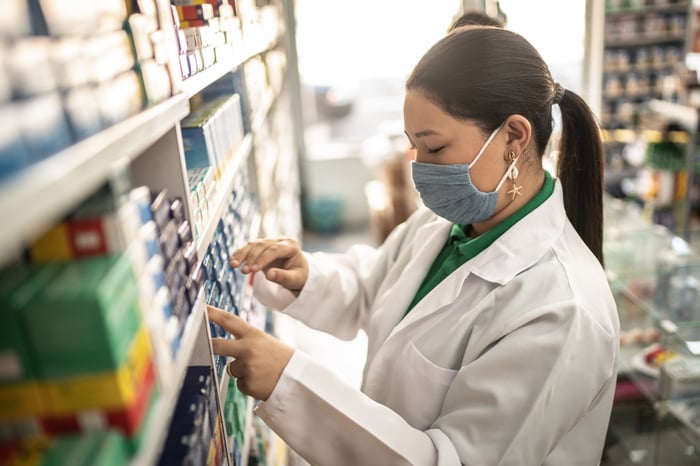 Why it probably isn't too late

The single most persuasive argument against it being too late to buy Viatris is that the company is just getting started. After all, its life as an independent entity started a mere year ago with the merger of Pfizer's generic drugs business, Upjohn, and Mylan. Given that it still isn't profitable or finished integrating the assets of both of its originating companies, it's hard to believe that the market has priced in all of the potential upside of Viatris stock.

While management anticipates the next couple of years to be devoted to reducing debt load (more on that later), its pipeline of biosimilars and complex generic drugs is growing by the quarter. When regulators confirm that those candidates are as safe and effective as the branded drugs they're intended to replicate, Viatris will see its revenue grow -- but it hasn't fully demonstrated that potential yet.

One of the largest appeals of holding Viatris stock is its dividend, which management has signaled it plans to increase each year as long as it's safely able to do so. At the moment, its forward dividend yield is 2.6%, which is a fair bit higher than the market's average trailing yield of 1.26% this year. Because the dividend is newly initiated this year, it's hard to tell how quickly it'll grow over time, but the point is that people who buy the stock soon will get the largest gains from however much the payment increases moving forward. And that's a big reason why it's premature to assume that it's too late to benefit from an investment.

Then there's management's plan to start repurchasing the company's shares, which it anticipates it won't even have the spare cash for until sometime after 2024. That leaves plenty of time for new investors to buy in.

Viatris has a few issues that should give investors pause.

First, it has $19.85 billion of long-term debt that threatens to constrain its actions for as long as it's on the balance sheet. It also has $3.61 billion in current debt that'll need to be paid off within a year. So far this year, the company has spent $1.95 billion on long-term debt payments.

In light of its unprofitability and its cash holdings of $844.3 million, there isn't much choice but to keep churning by taking out new debt in hopes of paying it off down the line. Management plans to pay off as much as $6.5 billion more by 2023, which means that 2022 will see even more deleveraging.

As long as the company is busy with debt repayment, it won't have as much of its free cash flow (FCF) to pay to shareholders in dividends. And, while it's true that Viatris' quarterly FCF has improved by 19.87% year over year in 2021 so far, margins still need to improve if the company wants to be financially healthy. On that note, total quarterly operating expenses as a percentage of revenue have fallen by nearly 14%, and management expects to realize another $1 billion in cost synergies by 2023 on top of the $500 million it plans to realize this year.

Don't sweat the timing, but know why it matters

In my view, it isn't too late to buy Viatris stock, but that doesn't mean that you should be rushing to buy it today.

Conservative investors might want to wait a few more quarters until it's clear that Viatris is actually capable of handling both its efficiency improvements and its debt repayment at the same time. Considering that this stock is likely going to be best for a long-term hold with the aim of making money on dividend hikes over time, there's certainly no rush to buy it before things are stable.

On the other hand, investors who are willing to take on the additional risk of buying Viatris stock before it's proven to be a consistently profitable generic drug manufacturer may get a bit of extra reward in the form of share price appreciation. As more information about the company's financial performance is revealed in earnings reports, this risk premium will likely dry up.