Moderna (NASDAQ:MRNA) and Pfizer (NYSE:PFE) dominate the coronavirus vaccine market. Each has generated quarterly vaccine revenue in the billions. And they expect to report annual vaccine revenue of as much as $18 billion and $36 billion, respectively. Johnson & Johnson also sells a coronavirus vaccine. But the company has remained a distant rival since that product's authorization.

But the vaccine market soon may welcome another competitor. And that competitor has a potential vaccine that could carve out a decent share of the market. Now, the question is whether, right now, this latecomer represents a better buy than today's leaders. Let's find out. 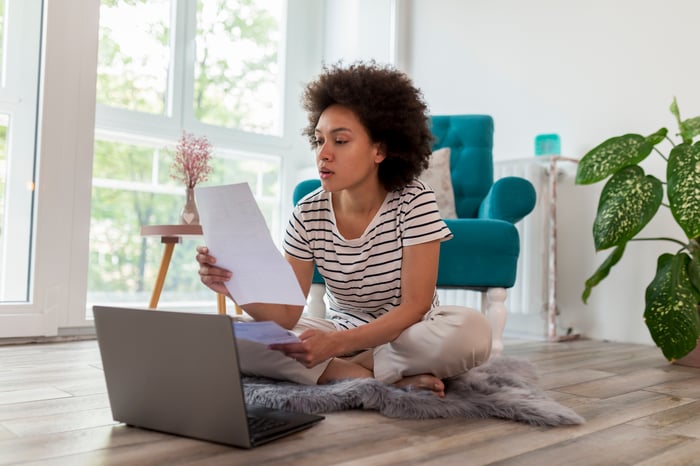 Not a stranger to the spotlight

So, which player am I talking about? None other than Novavax (NASDAQ:NVAX). The company is far from a stranger to the spotlight. The U.S. awarded the biotech $1.6 billion in funding in the early days of the vaccine race -- and a contract for the delivery of 100 million vaccine doses. Novavax fell behind due to struggles with its manufacturing ramp up. But in recent weeks, the company completed regulatory filings to various countries. And it's even won authorization from Indonesia and the Philippines.

Novavax plans on filing for authorization in the U.S. before the end of the year. A decision could come a few weeks later. But can Novavax still benefit this late in the game?

I think so. And here's why. Novavax's potential product is different from the Moderna and Pfizer vaccines. The candidate isn't an mRNA vaccine. That means it doesn't include mRNA to instruct the body to produce a copy of the coronavirus spike protein -- that's the protein used to infect. Instead, Novavax's candidate falls into the category of protein subunit vaccines. It includes a genetically engineered spike protein in nanoparticle form along with an adjuvant to boost immune response.

Some healthcare providers and individuals hesitate to go for a new technology like mRNA. And this is where Novavax can gain market share. Subunit vaccines already are on the market -- an example is the hepatitis B vaccine. This is a long-proven technology. So those who are hesitant about going for a coronavirus jab may more easily opt for Novavax.

Also, Novavax's candidate is stable at refrigerator temperatures. Moderna and Pfizer vaccines can only be stored at those levels for a month. After that, they require freezer temperatures.

Novavax also may get a lift from the U.S. Food and Drug Administration's authorization of vaccine "mixing and matching." That means anyone who has received a primary series of one authorized vaccine brand may choose the same brand or another when it's time for a booster.

And finally, Novavax won't be left behind when it comes to dealing with variants of concern. A Novavax spokesperson told The Hill that the company has begun development of a candidate targeting the omicron variant. Health officials first detected omicron in South Africa early last month. Since, it's spread to other areas including Europe and North America.

Now, let's look at Novavax's stock price. It climbed more than 12% last month. From here, Wall Street predicts the stock could increase 30%, according to the average 12-month price forecast.

Year-to-date, Moderna has soared past Novavax. Pfizer remains the laggard. (That's almost expected. Pharmaceutical companies aren't as sensitive to vaccine news as their biotech rivals. That's because they depend on the sales of many products -- so they aren't as reliant on just one.) 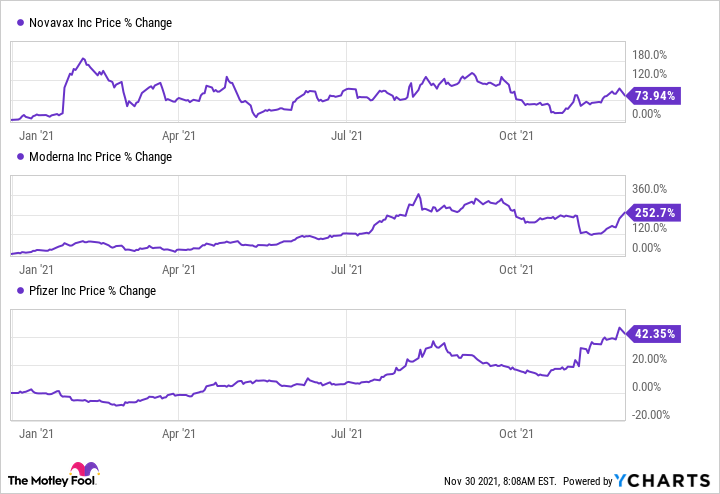 So, which is the better buy?

Novavax is particularly interesting at today's level. That's because several catalysts lie ahead: regulatory authorization in various markets including the U.S., vaccine rollout, and real-world data once a product is on the market. Any positive data on how Novavax fares against the omicron variant also could offer a lift.

I'm positive on Moderna and Pfizer over the long term. But they've already been through the vaccine authorization and launch stage -- and reaped the rewards of share performance. In the coming months, it may be Novavax's turn. That's why this biotech stock may represent a better buy right now.