Shares of Ford Motor Company (NYSE:F) were moving higher on Wednesday after a prominent Wall Street analyst noted that the company's electric Mustang Mach-E is on track to outsell a key rival in 2021.

In a new note on Wednesday morning, Morgan Stanley analyst Adam Jonas noted that Ford sold 21,703 Mustang Mach-Es in the U.S. through October. That number trails the sales total for the Chevrolet Bolt EV from old rival General Motors (NYSE:GM) through the period, but there's a twist: According to a Detroit News report, Jonas wrote, GM has decided to halt production of the Bolt through the end of 2021 while it works through a massive recall of Bolts for defective battery packs. 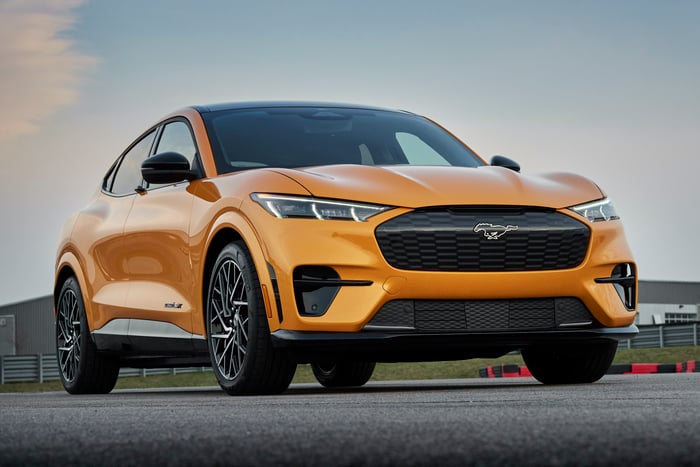 Ford's Mustang Mach-E has been a big hit for the automaker, with demand far outstripping supply so far in 2021. Image source: Ford Motor Company.

Jonas expects that the Bolt production halt will put Ford's total U.S. electric-vehicle sales ahead of GM's for the full year. The Mach-E continues to sell well, and Ford has begun production of the electric version of its Transit commercial van, while GM is likely to make just a few deliveries of its electric GMC Hummer before the end of 2021.

Jonas is less bullish on Ford's stock, though. Last month, he reiterated his underweight rating on the shares and his $12 price target. Jonas wrote that part of his thesis is that underweighting Ford provides a hedge to his strongly bullish call on GM, which he rates as his top pick in U.S. autos in part because of its aggressive EV plans.

Is it a big deal if Ford's EVs outsell GM's in 2021? Not really. Both Ford and GM plan to introduce more new EVs next year, and the Bolt's issues should be sorted out sometime in the first quarter of 2022. But given the intense investor focus on all things related to electric vehicles right now, it's not surprising that Ford shares jumped after Jonas' note was released.