Salesforce.com (NYSE:CRM), at times one of the more popular tech stocks on the market, wasn't too popular on Wednesday. Investors were selling it off following the release of the company's latest set of quarterly results after market hours Tuesday; in midafternoon trading, the stock was down by 9%.

Salesforce actually had quite a successful third quarter of fiscal 2022 by numerous measures. Its revenue landed at $6.86 billion, which was 27% higher on a year-over-year basis and beat the consensus analyst estimate of $6.79 billion. And although non-GAAP (adjusted) net income fell by 22% to $1.27 billion, at $1.27 per share it trounced the collective prognosticator forecast of $0.92. 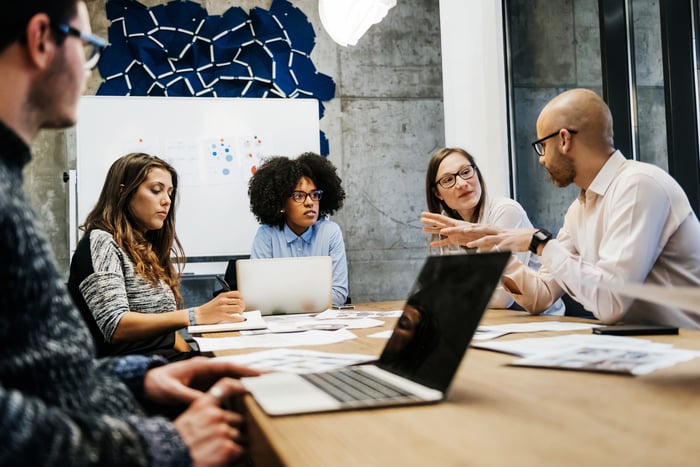 One notable change for the company is that online business messaging service Slack -- bought almost exactly a year ago -- was incorporated for the first time into Salesforce's results.

Slack is clearly an important part of the company's strategy. "During the third quarter, we again executed against the strong demand environment in front of us. Slack saw another strong quarter, and we are pleased with Slack's representation in our largest deals," CFO Amy Weaver said.

Investors tend to look forward, not back, and that was the rub for Salesforce.

The company proffered guidance for this quarter, fiscal year, next quarter, and fiscal 2023. For the current fourth quarter, it's anticipating a roughly 24% slide in revenue. This line item should land at slightly over $7.22 billion to a bit more than $7.23 billion, more or less meeting analyst expectations. However, the anticipated adjusted earnings per share range of $0.72 to $0.73 is well down from the average $0.82 analyst projection.

Finally, it appointed two new members to its board of directors. These are Laura Alber, CEO of Williams-Sonoma, and onetime United Airlines CEO Oscar Munoz. Alber's appointment is effective immediately, while Munoz will begin his tenure on Jan. 1, 2022.