Progenity (NASDAQ:PROG), a biotech company and a meme stock favorite, saw its shares decline more than 11% on Wednesday. The stock, which closed at $3.13 on Tuesday, opened at $3.21 today, but fell throughout the day, dropping to as low as $2.73 in the early afternoon. It is a small-cap stock and has been prone to wild swings, with a 52-week high of $7.86 and a low of $0.657. Overall, Progenity stock is down more than 47% this year. 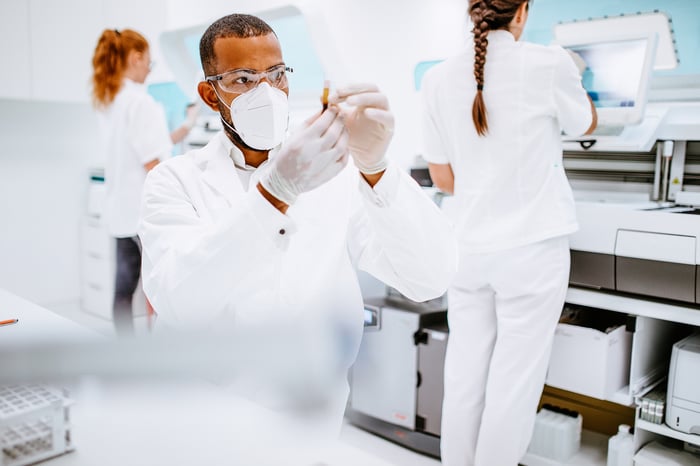 The stock has been falling, with a few ups and downs in between, since Nov. 23, when the company reported roughly $44 million in warrant exercises during the fourth quarter, diluting the shares. On Nov. 22, it sold for a high of $5.23, but every day since, the stock has closed steadily lower until a slight uptick on Tuesday. The selling today seems to be a reaction to that upswing, as a combination of retail investors selling and heavily shorted positions pushed the stock lower.

The markets don't like uncertainty, and that's one reason Progenity has trended downward. The company has said it intends to shift from prenatal tests, where it saw decent revenue, to focus on its pipeline of gastrointestinal (GI) health and oral biotherapeutics. That change has led to declining revenue in each of the past three quarters.

Long-term investors, however, can look at the potential in the biotech company's pipeline. It has 220 pending patent applications and 180 patents. The question is how patient investors will be in waiting for those patents to pay off. The company has great hopes for its drug device combinations, saying its ingestible-capsule technology will allow needle-free oral delivery of large-molecule drugs to the small intestine. The company's other big innovation is its drug delivery system, which would bypass the gastrointestinal system, delivering drugs directly to the affected tissues. That would assist patients with GI diseases that reduce the effectiveness of oral drugs.

The company sees the market potential of its platforms at more than $100 billion, with significant upside. The question for investors is whether Progenity will be able to raise enough funds to see itself reach that potential.